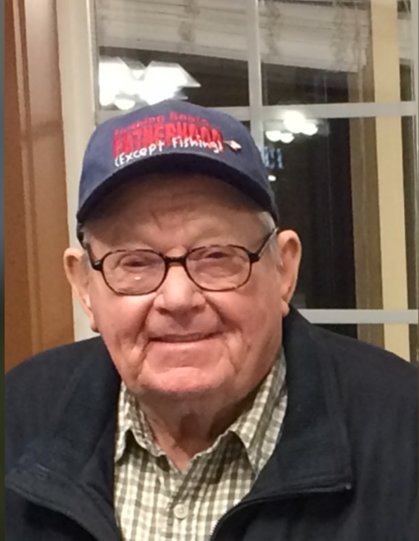 In 1956, he enlisted in the Navy and served in both the Pacific and the Atlantic as a 3rd class boiler technician.  During one mission the USS Harlan R Dickson played a key role evacuating American citizens from Haifa, Israel as war threatened between Israel and Egypt. After leaving active service, he worked in the construction business and drove different earth moving vehicles.  He was a member of the International Union of Operating Engineers Local 571B.  Besides watching sports, he enjoyed many outdoor recreations including hunting, fishing, and camping.  After retirement, he met Clara and they began their adventure called life.  One of their first great adventures was a road trip to Alaska.  They frequently went to Red Oak to watch their grandchildren in their many activities.  Eventually many years were spent as snowbirds residing in Arizona during the winter months and traveling back in their RV during the summers. After years of traveling, they settled in Blair.  They had great fun and made many friends and memories.  LaVerne loved to cook for his family and friends.  He enjoyed playing cards, pool, and horseshoes.  He enjoyed trips to the Blackhawk Casino with family and friends.   He enjoyed helping those in need whether it was giving them a ride to an appointment, helping them with a house project, or preparing food for a community event.  In 2014 he was awarded the Good Neighbor Award from the Knights of Ak-Sar-Ben Foundation.