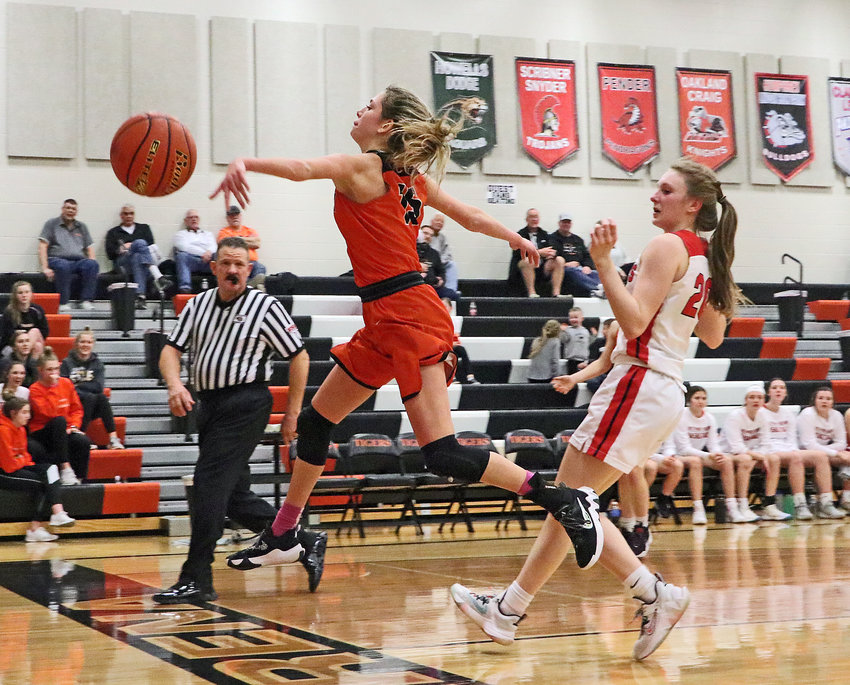 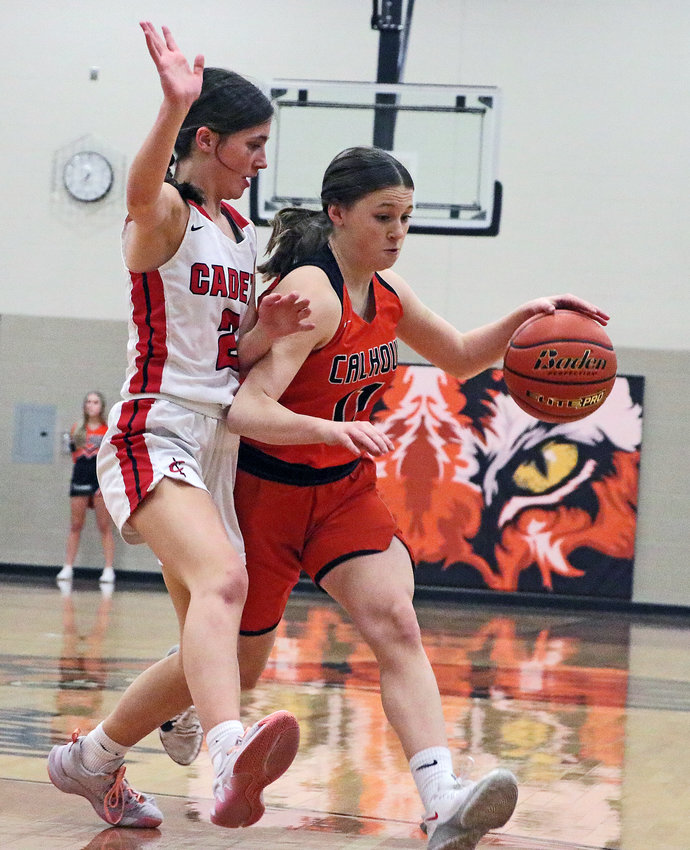 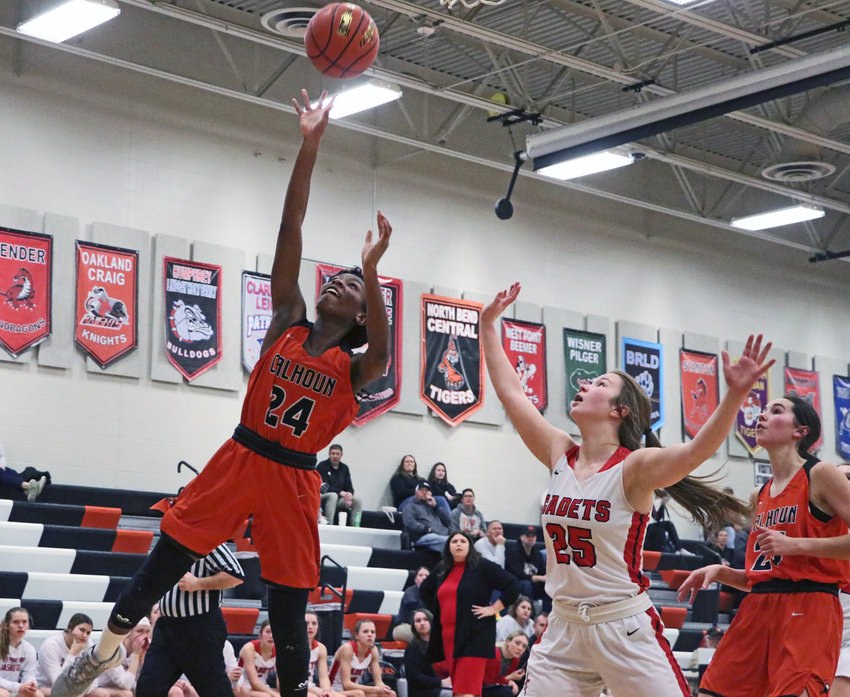 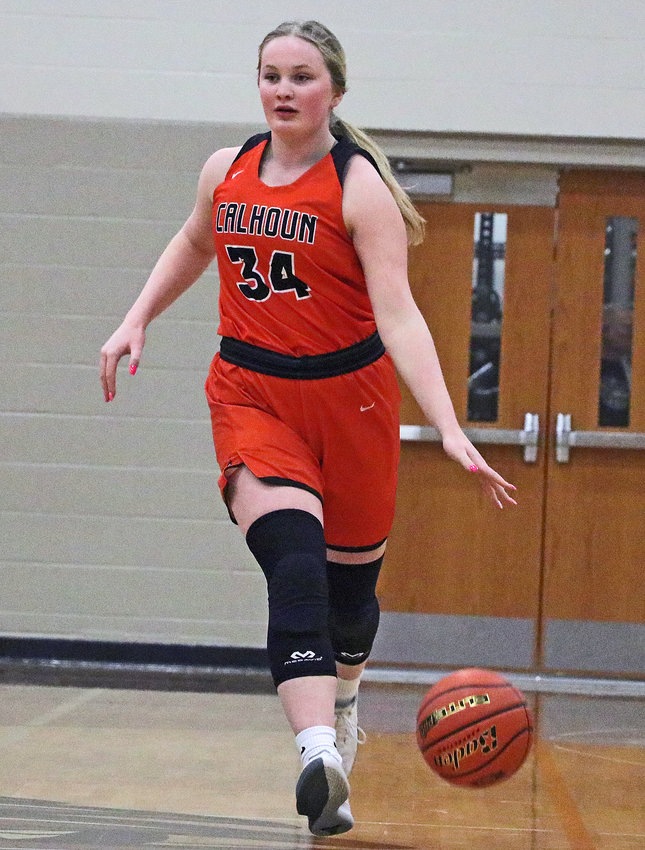 The Fort Calhoun girls basketball season ended Tuesday at the conclusion of a Class C1 Subdistrict 6 Tournament game between the Pioneers and West Point-Beemer.
With 31 seconds left in the Cadets' 58-40 win at North Bend Central, FCHS senior Tess Skelton looked over her shoulder at the bench as coach Marty Plum sent his first wave of substitutes out onto the floor between a pair of West Point foul shots.
It wasn't her turn.
After the second Cadet free throw, though, the time came. Skelton, the Pioneers' only 12th-grader, left the court one last time and found her coach waiting for her with open arms. Plum threw one around the 5-foot-7 guard's shoulder and shared some words of encouragement.
“Just that he's really proud of me and that it's been fun coaching me,” Skelton said when asked what he'd told her. “And that I'd helped the program and stuff.”
Much like she has throughout her time as a FCHS standout, the guard led the Pioneers with 19 points against West Point-Beemer. She made two 3-point shots and acted as the veteran leader she is.
“A tremendous young woman,” said Plum, who's now coached Calhoun for two full seasons. “Along with our six seniors last year, she's done a great job of laying a terrific foundation for the future.”
The senior has delivered hard work and remained coachable throughout.
“Whatever postseason honors and recognition she gets, she deserves,” the coach added.
West Point netted a 14-2 lead before Skelton scored her first points Tuesday, though. The opening bucket of the second period, and subsequent and-1 foul shot, pulled her squad within 14-5 after a slow start.
“The game, unfortunately, was the first quarter,” Plum said. “It was a dead-even game the rest of the way.”
Effort plays and offensive rebounds by junior Dala Drowne and her teammates helped FCHS stay within striking distance. The Pioneers trailed by 15 at halftime and 12 after three quarters, but managed to cut their deficit to just 10 during the opening seconds of the fourth on another Skelton bucket.
Plum's squad just couldn't get any closer.
“I thought West Point played well tonight. They deserved to win,” he said. “They played a full 32 minutes. We played a real solid 24.”
In addition to Skelton's 19, sophomores Bria Bench and Maddy Tinkham had nine and eight points, respectively. Drowne had four, too.
“We're all really close,” the senior scoring leader said. “We have kind of a small group, so we're all just really tight.”
FCHS players compete for each other, Skelton said, which is why she shed tears in the locker room at the thought of never suiting up in a Fort Calhoun jersey again. She won't get to play with some of her best friends because of it.
“I can play basketball,” the senior said, her voice cracking. “But it's just not going to be, like, the same.”
Skelton left the postgame interview and walked directly to her family in the North Bend Central lobby. Her older brother, Tanner, held flowers for his little sister.