Blair suffers 1st loss of season to Class B No. 2 Omaha Gross 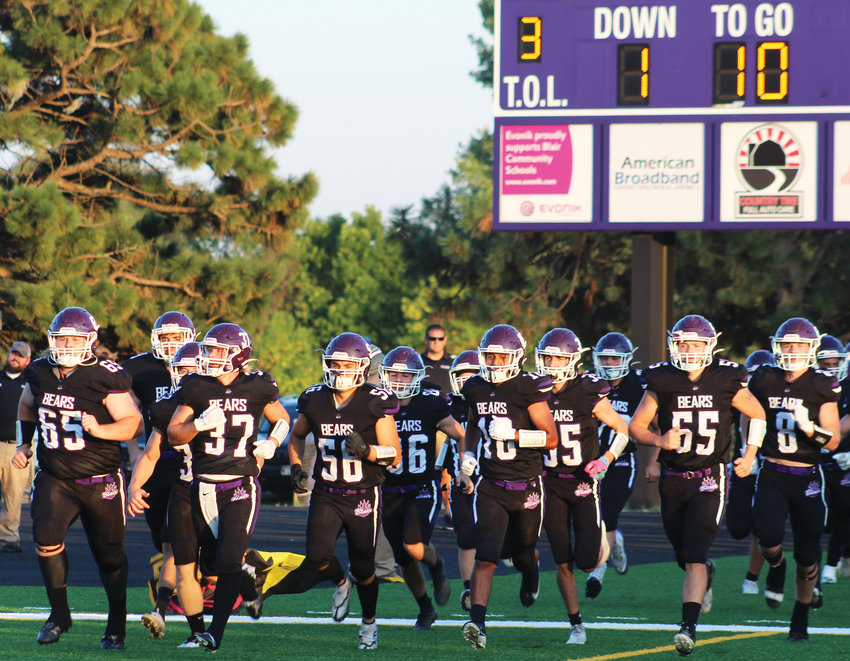 Members of the Blair football team run onto the field ahead of the Bears' game against Class B No. 2 Omaha Gross on Friday night.
Aaron Hickman 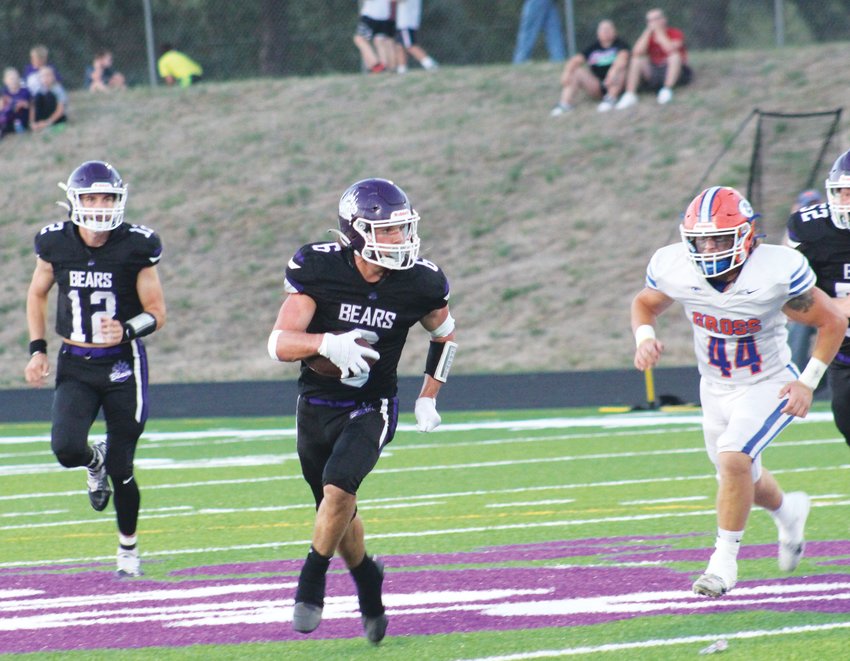 Brock Templar (6) runs in space during Blair's loss to Class B No. 2 Omaha Gross on Friday night.
Aaron Hickman 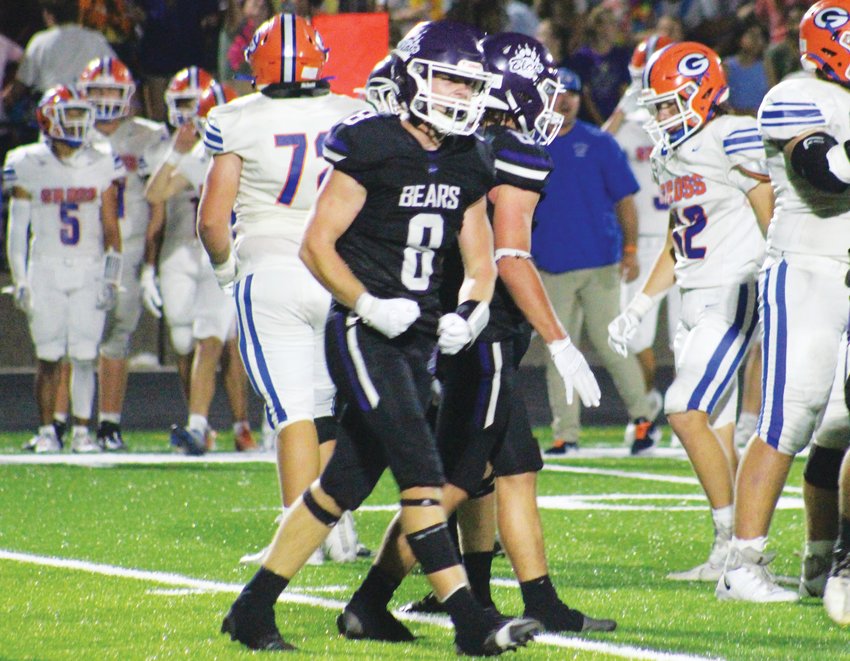 Ben Holcomb (8) flexes after making a tackle during Blair's loss to Class B No. 2 Omaha Gross on Friday night.
Aaron Hickman 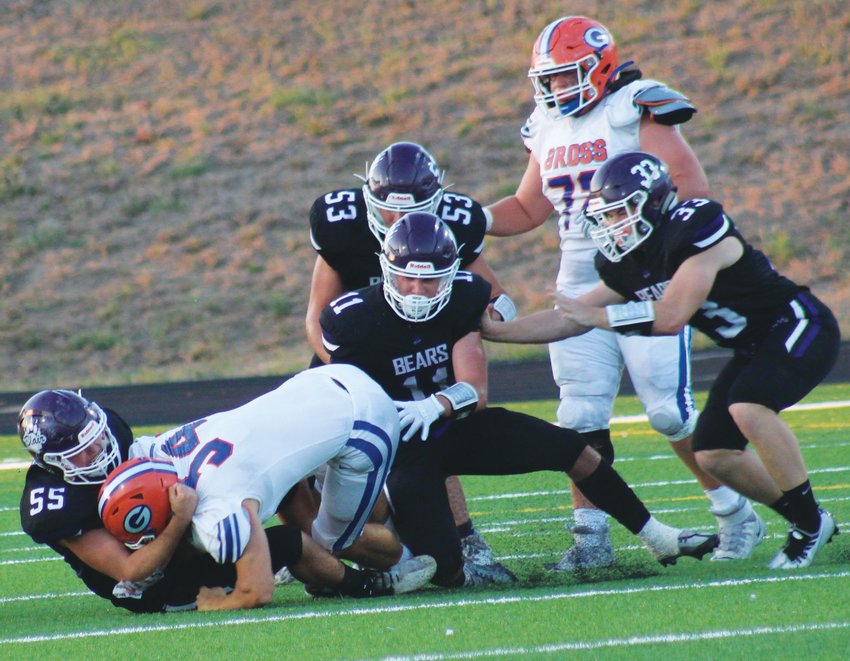 In a battle of undefeateds and the biggest test of the season up to this point, Blair suffered its first loss by a score of 34-7 to Class B second-ranked Omaha Gross on Friday night.

“We knew coming in that (Omaha Gross) would be a good test for us, and we just got off to a bad start,” Bears head coach Bryan Soukup said. “We made some mistakes and had some miscommunication here and there, and obviously weren’t able to overcome those things.”

The Cougars made several home run plays throughout the night, but the first set the tone for the game and put Blair behind the eight ball.

Less than two minutes into the first quarter, the Cougars were in an unfavorable position, needing 19 yards to convert on third down.

They got that and a whole lot more, as quarterback Colby Duncan connected with Charlie Paladino for a 72-yard score.

That was just the first of long scoring plays for the Cougars, as a 52 yard run by Jake Garcia and a 33 yard reception by Jackson Drake went along with a couple of short touchdown runs against the Bears’ defense.

Offensively, the Bears had several drives stall in enemy territory. Looking to expose what was perceived as a weakness on film for Omaha Gross, the gameplan was to take advantage of underneath routes and gain yards after catch in order to set up the deep shots. Instead, those plays resulted in short gains more often than not.

“They’re way better aggressively on defense than I gave them credit for coming in,” Soukup said. “We thought we’d be able to hit some of the short stuff and then make some big plays, but they did a good job of swarming and making tackles.”

But down 34-0 heading into the fourth quarter, the team still continued to fight. Quarterback Bode Soukup, who completed 19 of 32 passes for 177 yards, one score and one interception, found trusted receiver Brady Brown for their third touchdown connection of the season on a 25 yard pass early in the fourth quarter.

Sophomore Brock Templar ran the ball 16 times for 100 yards, and the team picked up 144 yards on the ground as a whole.

When using the game as a measuring stick, Blair didn’t make the plays necessary to hang with one of the top teams in the area. However, they showed continual signs of life and fought to the end. With better execution in enemy territory and some tune-ups on defense, the final score could have looked much different.

After going 1-8 last year and starting off 3-0 this year, suffering a loss to a great team in Omaha Gross isn’t the end of the world, and Soukup hopes that it will serve as a learning experience.

It’s also just one chapter in a long season, and it’s important to keep things in perspective while still in a very good position with a 3-1 record.

“It’s one game,” Soukup said. “We learn from it, we watch film and get better. In the grand scheme of things it is one game, and we’ve got five more to go.”