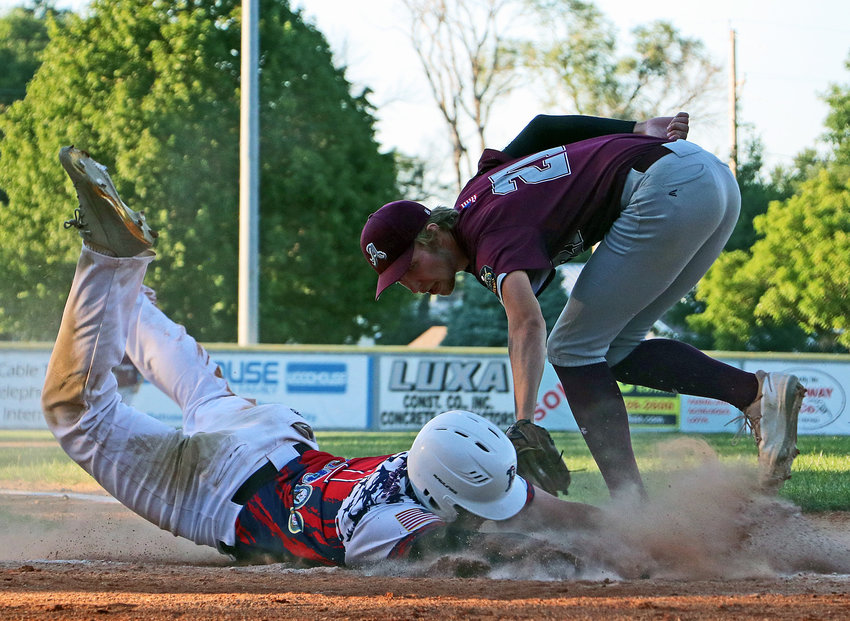 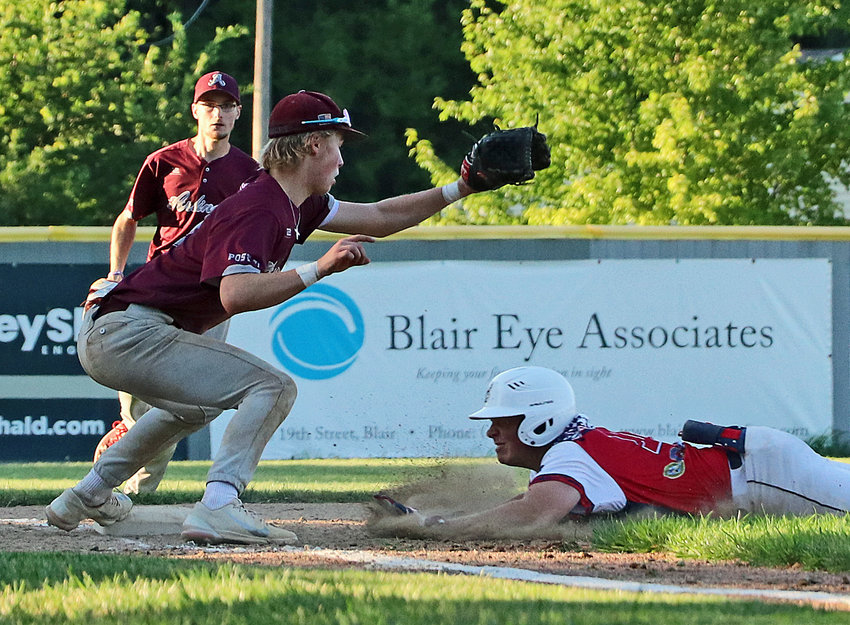 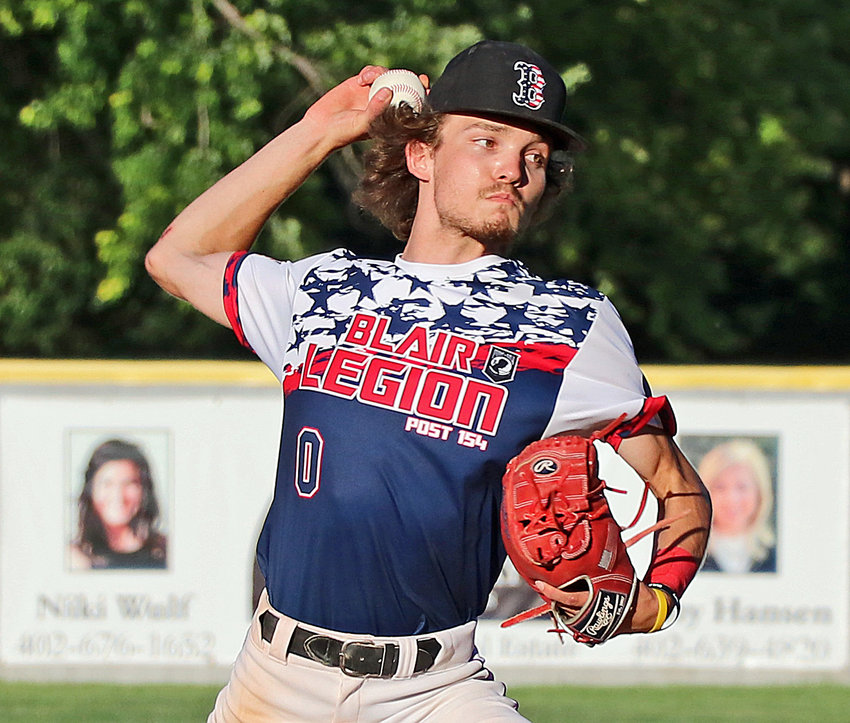 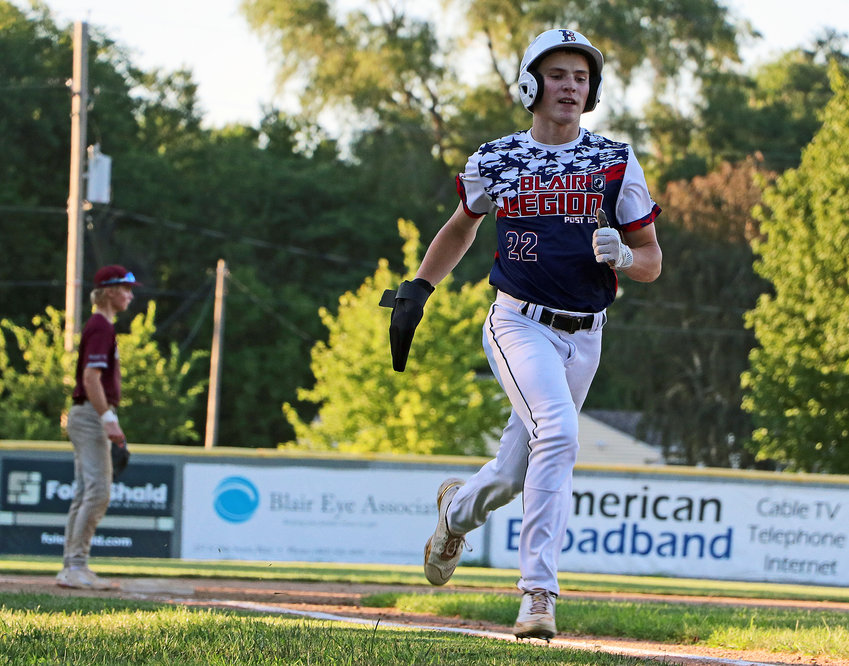 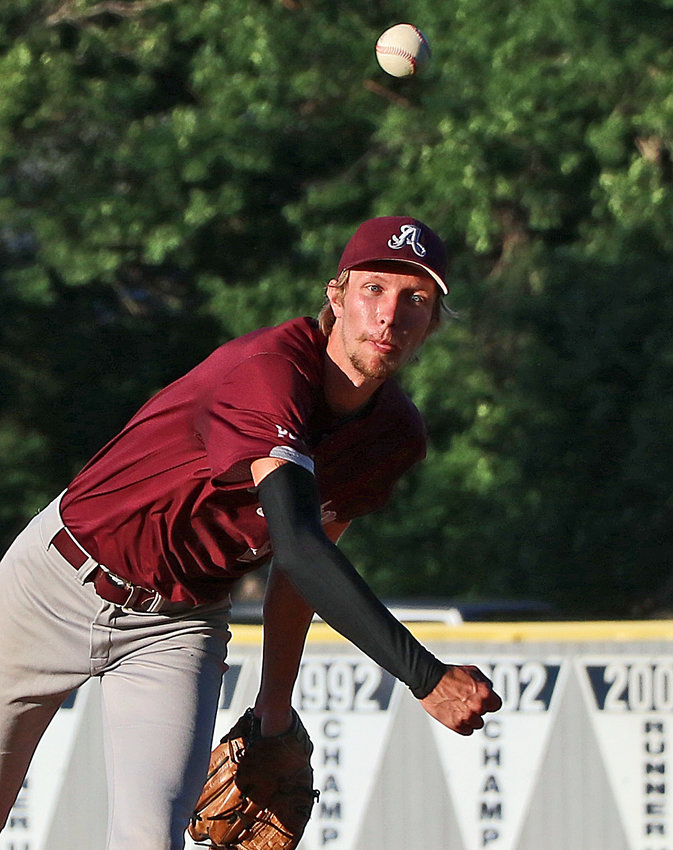 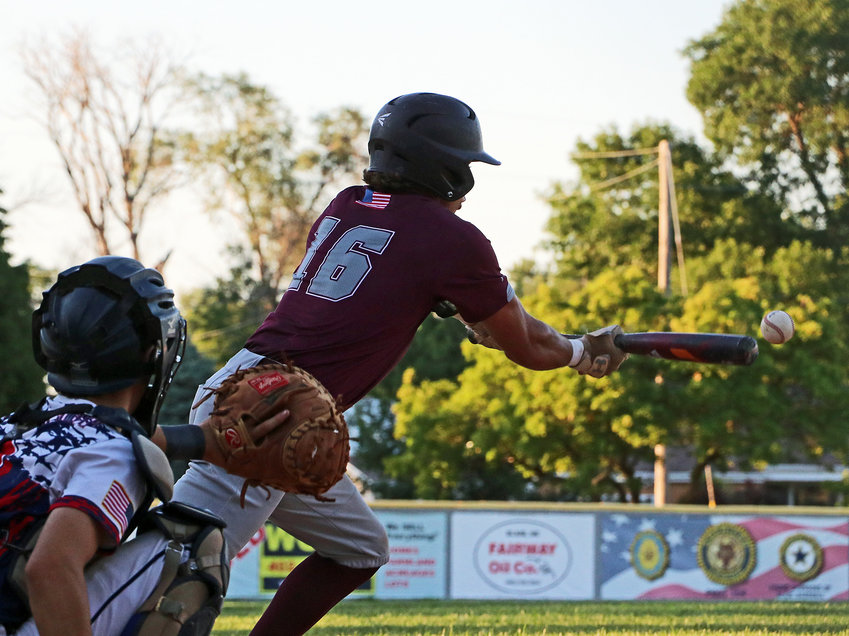 Blair Senior Legion pitcher Bo Nielsen felt his heart rate rise as he was tasked with holding off the Arlington Post 71 Eagles' lineup Monday at Vets Field.
When all was said and done, though, he was able to lean on the outfield fence, take a deep breath and talk with family after a 12-10 Post 154 victory.
“It's coming down, but it was pretty high,” Nielsen said. “I was walking way too many people for my comfort, but, yeah, got it done.”
Once trailing 8-6, coach James Bilslend's Bears were able to regain an advantage and end Arlington's seventh-inning rally in time for a home win. They led 12-8 going into the final frame, but watched as coach Ed Menking's Eagles loaded the bases twice. Barrett Nielsen scored when Kaden Pittman was hit by a pitch, and Trevor Denker cut his squad's deficit to two on an RBI single.
“We didn't give up,” Denker said. “I knew we weren't going to.”
Bo Nielsen bounced back on the mound, though. He struck out Nick Smith before Arlington's Jack Bang lined out to Dylan Swanson at first base to end the game.
Offensively, Blair notched 13 hits to Post 71's eight. Catcher Conner O'Neil tallied three RBIs on a 2-for-3 night, while Tanner Jacobson and Morgan Rump plated two runs apiece. Ethan Baessler, Rump, Nate Wachter and Swanson notched extra base hits during the Washington County matchup, while Bo Nielsen, himself, went 2-for-2.
“That was what helped us out a lot,” he said. “Just putting the ball in play. That helped.”
A Greyson Kay infield RBI single during the bottom of the fourth inning gave the Bears a lead for good, 9-8.
The Eagles, meanwhile, saw Smith and Denker combine for seven RBIs. Smith was 2-for-5 with four, while Denker was 1-4 with three.
“The top of the lineup was doing their job getting on,” the latter said.
Still, though, the teams battled back-and-forth for the lead through four innings. Neither backed down.
“We just came up there knowing we had to score runs,” Post 154's Bo Nielsen said. “And we just put the ball in play.”
Denker, meanwhile, saw a road game mired in miscues.
“Base running was atrocious tonight, so we need to fix that,” he said after Arlington left 11 runners on base. “There was a lot of missed opportunities.”
The next night, Tuesday, both teams were in action again. Blair lost 10-4 at Omaha Gross, while the Eagles fell 16-8 at Omaha Concordia.
At Gross, the Bears led 2-1 after one inning. The home team, however, later broke a 4-4 tie with a three-run bottom of the fifth inning.
Coach Bilslend's squad tried to answer with base runners during the top of the sixth frame, but Bo Nielsen and Kaden Fletcher were stranded by an inning-ending strikeout. Gross led 7-4 and eventually won by six after adding three more runs during the sixth frame.
Post 154 dropped to 13-15 in defeat.
Meanwhile, on the field at the Omaha Home for Boys, Arlington scored four first-inning runs, but couldn't keep up with the Concordia Mustangs' bats. The home team scored three runs during the bottom of the fourth inning and held the Eagles to none during the top half of the fifth to end the game early by run-rule.
The loss was Arlington's 13th of the season as Menking's team fell to 8-13 overall.