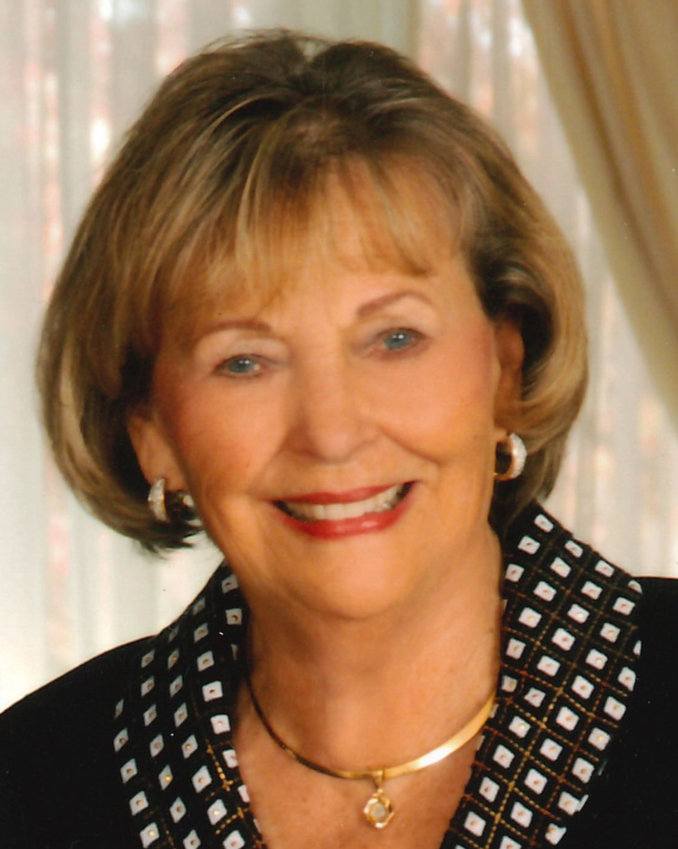 Virginia (Jensen) Rhoades, age 91, passed away peacefully at Country House Residence in Elkhorn, on Nov. 22, 2022. Visitation will be held at the Congregational United Church of Christ in Blair on Nov. 27, 2022, from 4 to 6 p.m. Funeral services will be held Monday, Nov. 28, at the First United Methodist Church in Blair at 10:30 a.m. Private graveside services will follow at the Rose Hill Cemetery.

Virginia was born Feb. 13, 1931, in her family farmhouse in Battle Creek, Iowa. She was the eldest daughter of Arthur and Ellece Jensen. After the family moved to rural Blair near Orum, she attended the Rose Hill School through eighth grade. Virginia completed her high school education at Blair High, where she met her high school sweetheart, Kenneth Rhoades.

After graduating high school in 1948, Virginia began working as a legal secretary in Fremont, and then worked in Blair for Kelly Ryan Equipment. It was while working there, she competed in the Ideal National Farmers Daughter Contest of 1949, held in Chicago, Ill. After winning the title, Virginia had television and radio interviews, was featured in a national advertising campaign, and had a multi-page feature story about her in Life Magazine. She even received hundreds mailed in marriage proposals from strangers around the country.

Soon after her receiving her title as a national beauty queen, Ken made an in-person proposal of marriage to Virginia, which she happily accepted. On Aug. 24, 1950, the two were united in marriage. Virginia joined Ken in the family newspaper business shortly after tying the knot. Virginia handled all the bookkeeping as the comptroller, and Ken was the editor and publisher of the Blair Enterprise and Pilot-Tribune. Together, they expanded their newspaper group to include nine community newspapers in Nebraska and Iowa. Truly a family operation, as youngsters, all three children helped out in the production of the weekly newspapers. Virginia and Ken continued to work together until they both retired.

Virginia took an active interest in the Rose Hill Cemetery, serving on the board for over 50 years, and acting as treasurer for many of those years.

She also loved her monthly bridge club, was a member of the Blair PEO Chapter EQ, Monday Afternoon Club, and was active in the Congregational UCC of Blair.

Ken and Virginia loved to travel, and over the course of their lifetime, they had the opportunity to visit places all across the United States and around the world including Europe, China, Russia, Japan and Australia. They loved to drive through the mountains of Colorado near Estes Park, and often visited Branson, Mo., to enjoy the shows and scenery.

Through their affiliation with the National Newspaper Association, Ken and Virginia were also able to personally meet several standing Presidents including Ronald Reagan, Bill Clinton and George W. Bush.

Virginia and Ken were both honored with the Blair Community Schools Foundation Community Service award in 2003.

Virginia loved to socialize, and if there was a party or get-together, or even a dinner on the town, it was assured that she would be there with Ken at her side.

She loved spending time with her family, always finding ways to get everyone together. Whether it was sledding and snowmobiling in their backyard, spending a summer afternoon at the pool, or just getting the family together for the holidays or a special occasion, those were the times that she loved the most. Being the ultimate hostess, Virginia made sure there was plenty of good food on hand for everyone.

Virginia and Ken enjoyed spending time at their home on Lake Okoboji, especially when their children, grandchildren or great-grandchildren were there. The couple would take them for boat rides, water skiing or watch them swim off the dock. She loved to treat everyone to their favorite rides at Arnolds Park, and usually finished off the day with a nutty bar for everyone.

She was preceded in death by her husband Kenneth, her oldest daughter Candace (Rhoades) Suverkrubbe, her parents, and siblings Ruthie Jensen, Dwayne Jensen and Doris (Jensen) Daniels.

Memorials may be directed to the Rose Hill Cemetery or the Blair Congregational United Church of Christ.