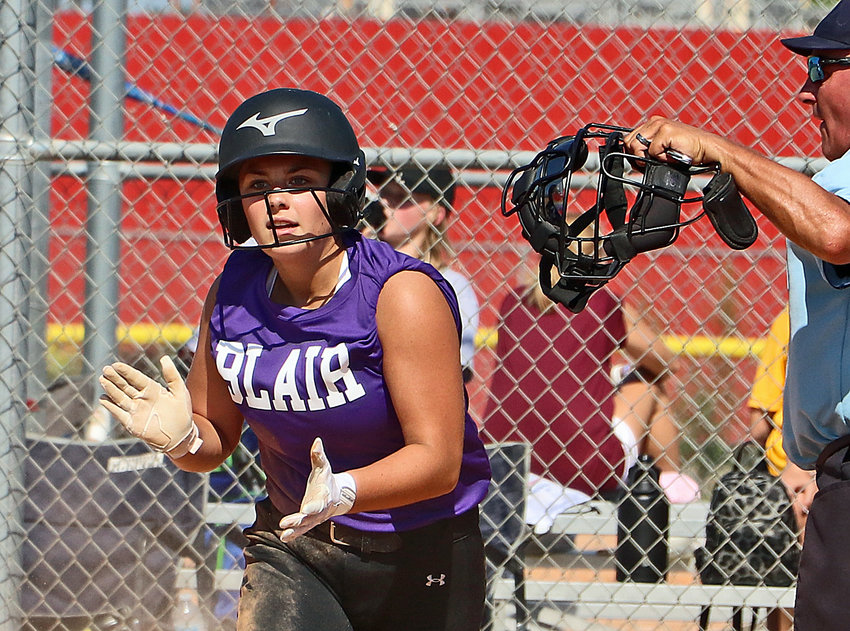 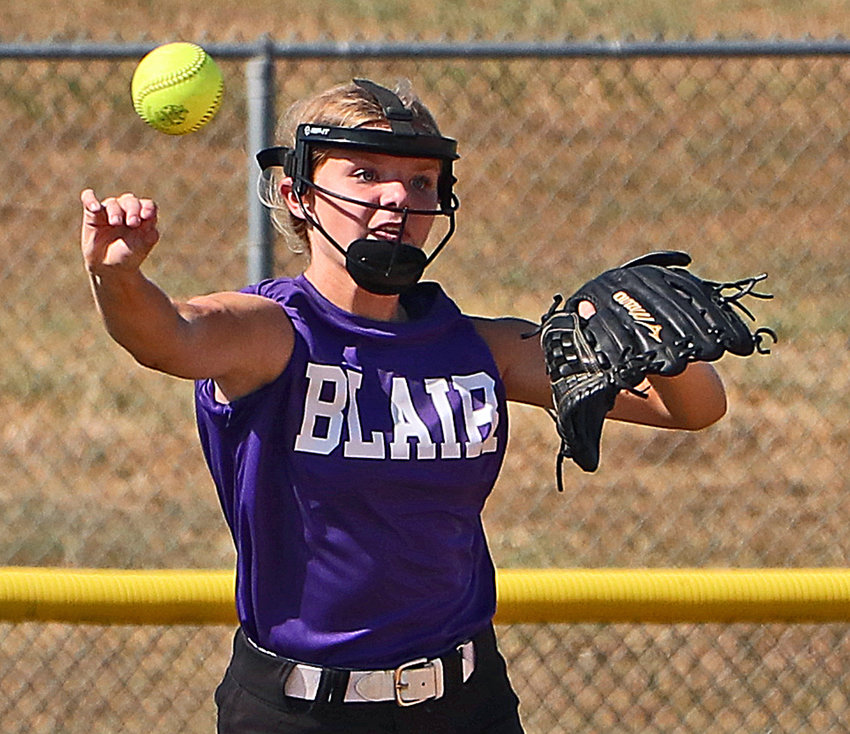 Blair's Ella Pike throws the ball back into the infield Friday during The Freshman State Softball Tournament in Lincoln.
Grant Egger 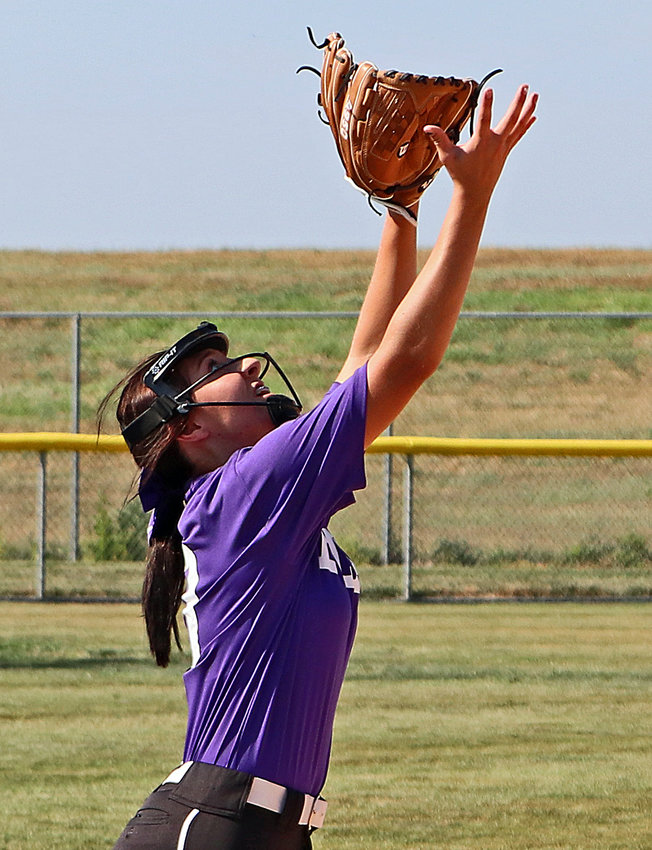 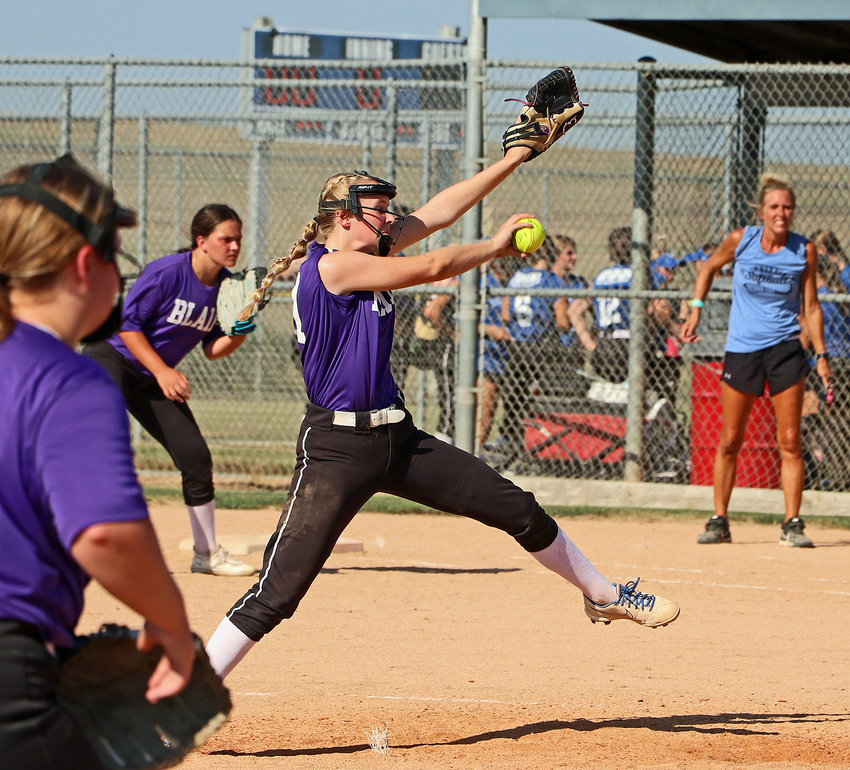 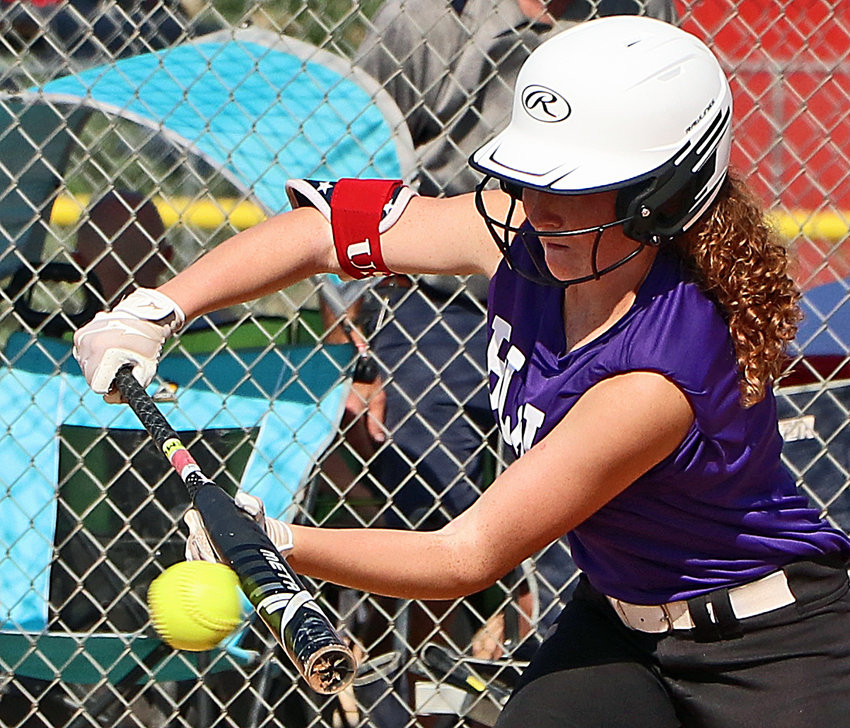 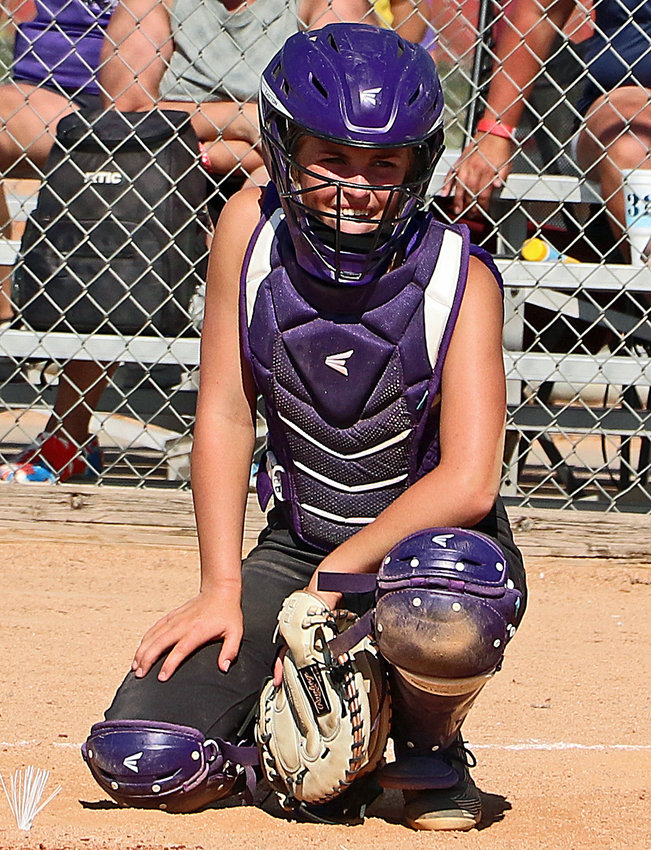 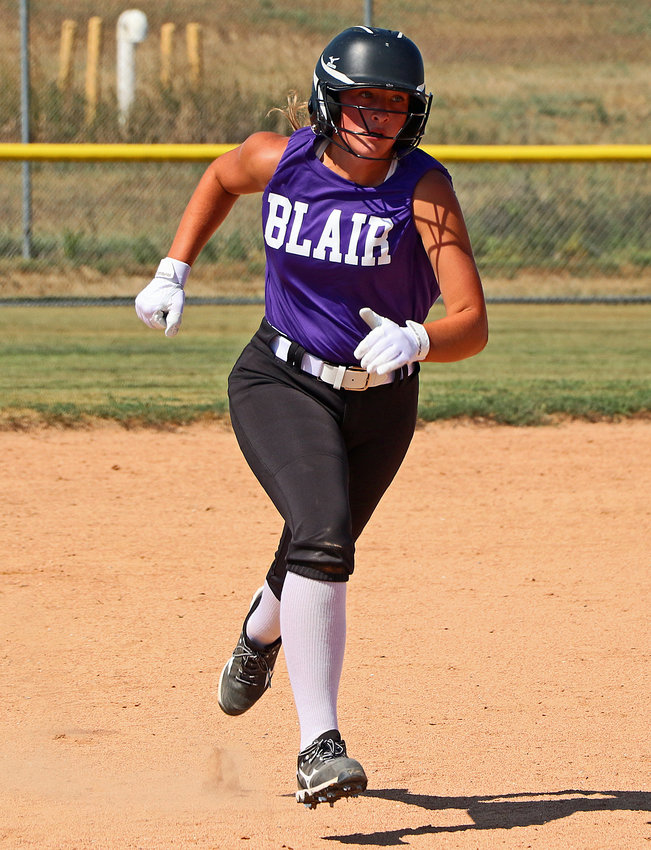 Blair softball players getting ready to start 10th, ninth and eighth grade joined forces last weekend for the The Freshman State Softball Tournament in Lincoln.
Coached by high school seniors Ally Lynch, Cailey Anderson and Tessa Villotta, the Bears started the annual event with a Friday afternoon game against Grand Island Central Catholic (GICC) at the Doris Bair Softball Complex.
“Part of the fun is the seniors coaching,” Anderson said. “We get to learn more about our incoming freshmen.”
“It's pretty fun to watch all of the girls connect coming from different teams,” Lynch noted.
The Freshman Tournament tradition begin in 1994 and is orchestrated each year by Ron Osborn, Robin Bourg, Amanda Osborn — a former standout BHS pitcher who still holds multiple school records — and others. Sherman Poska played an important role in starting it, too.
Games have been played in Omaha, Bellevue, Lincoln and — for a time — on the Blair Youth Softball Association (BYSA) fields. Though the tourney moved, Ron Osborn said his opinion of the BYSA diamonds remains high, calling them “first class.”
On Friday, the 2022 Blair entry into the three-day tournament beat GICC 13-7 during the first round. Anderson directed base runners from the first base side, including her sister, Claire.
“Lucky for me, she hit a home run tonight,” Anderson said. “First ever.”
Overall, Villotta was pleased with her future teammates' effort.
“They crushed the ball, which was also great,” she said.
The view from the third-base coach's box was a new experience, though.
“It's different,” Villotta said. “It's definitely a different side of the game. You know so much as a player and then you have to know even more as a coach. So, it's good to know both sides and where they come from.”
Claire Anderson's two-run homer against GICC came after Jacy Schueth's solo shot during the same seven-run second inning. Regan Blattert and Kaitlynn O'Neil contributed to the Bears' early 9-1 advantage with RBIs, too.
Later, Blair's Siena Smith would score on a passed ball before Ruby Petersen's RBI knock. Joey Avila notched a sacrifice fly before Schueth hit into a GICC error for her team's 13th run.
Abby Leggott earned the pitching win, while Taytum Macholan threw an inning as well.
Overall, The Freshman Tournament's first day served as a bonding experience for all of the Blair softball players involved.
“They look up to you more when this is done,” Lynch said of the relationship between the 10th, ninth and eighth-graders and their coaches for the weekend.
The Bears wound up fourth overall Sunday in Lincoln.
Official high school practice, however, started Monday, making everyone teammates for the fall season.