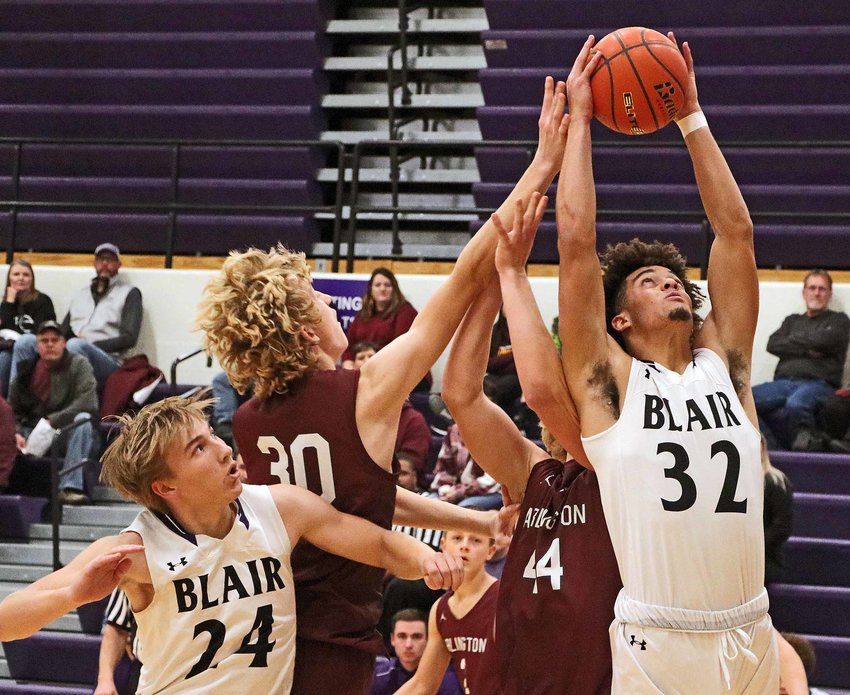 The Bears' J'Shawn Unger, right, pulls down a rebound from Arlington's Trent Koger (30) and Weston Wollberg (44) as Greyson Kay, left, does his part Monday at Blair High School.
Grant Egger 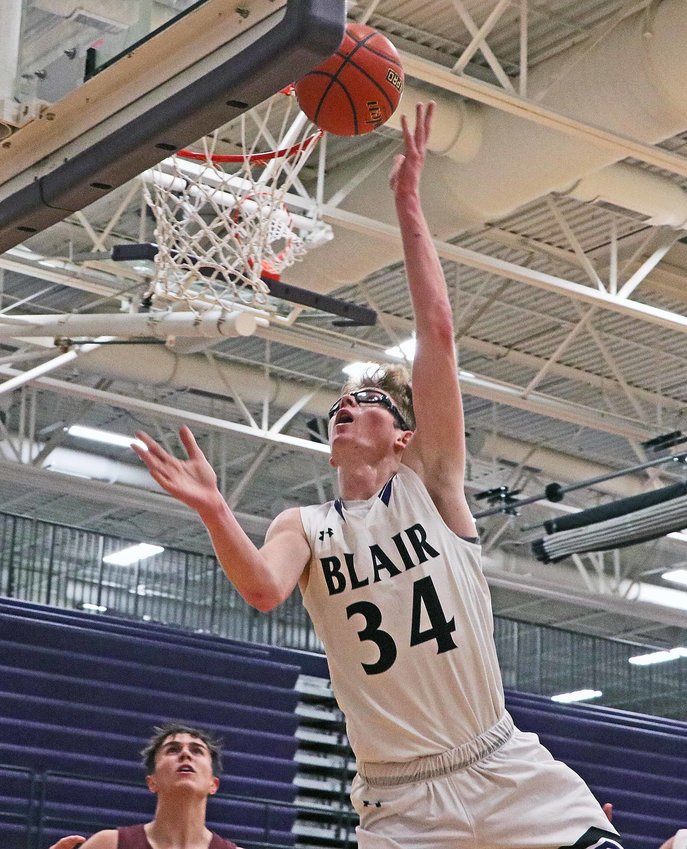 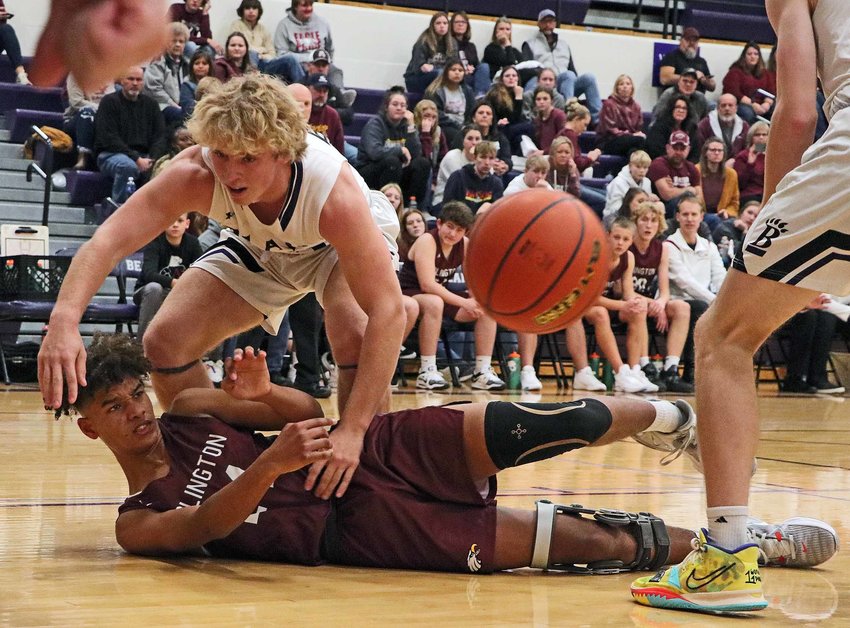 Arlington's Desmond Cole, bottom, throws the ball out from underneath the Bears' Ben Holcomb on Monday at Blair High School.
Grant Egger 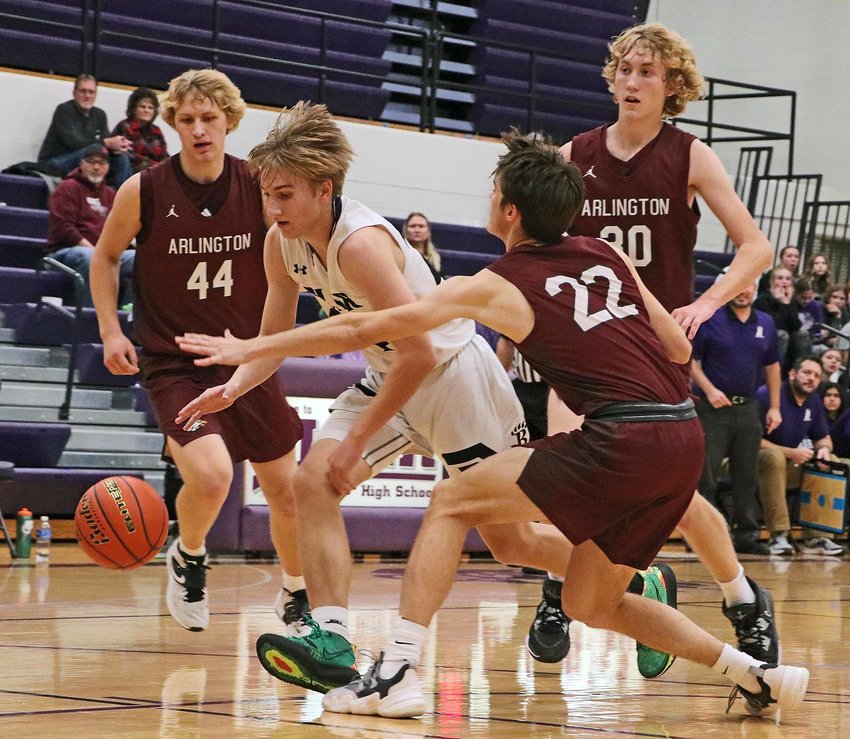 The Bears' Greyson Kay, middle, dribbles the ball by the defense of Arlington's Weston Wollberg, from left, Darren Olson and Trent Koger on Monday at Blair High School.
Grant Egger 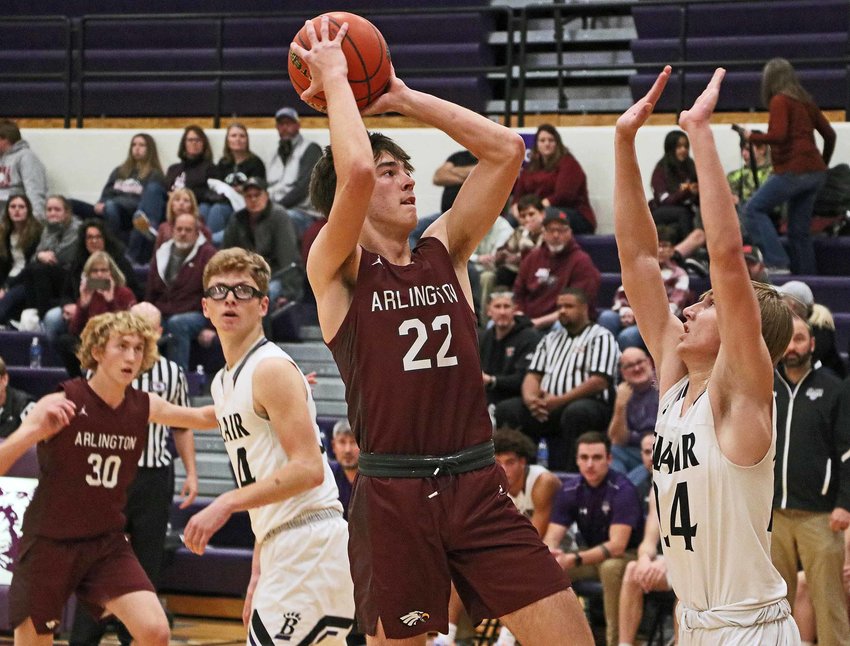 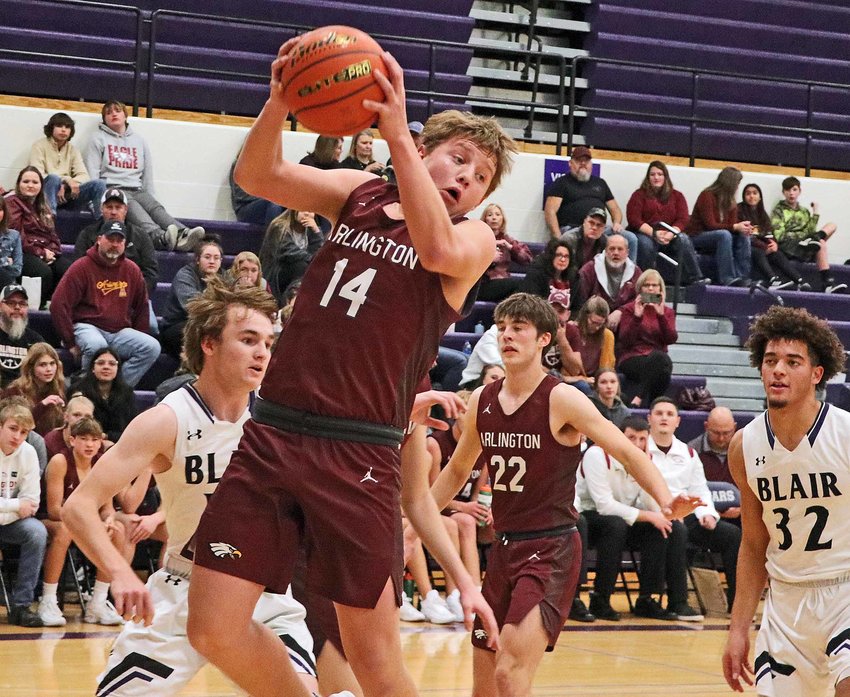 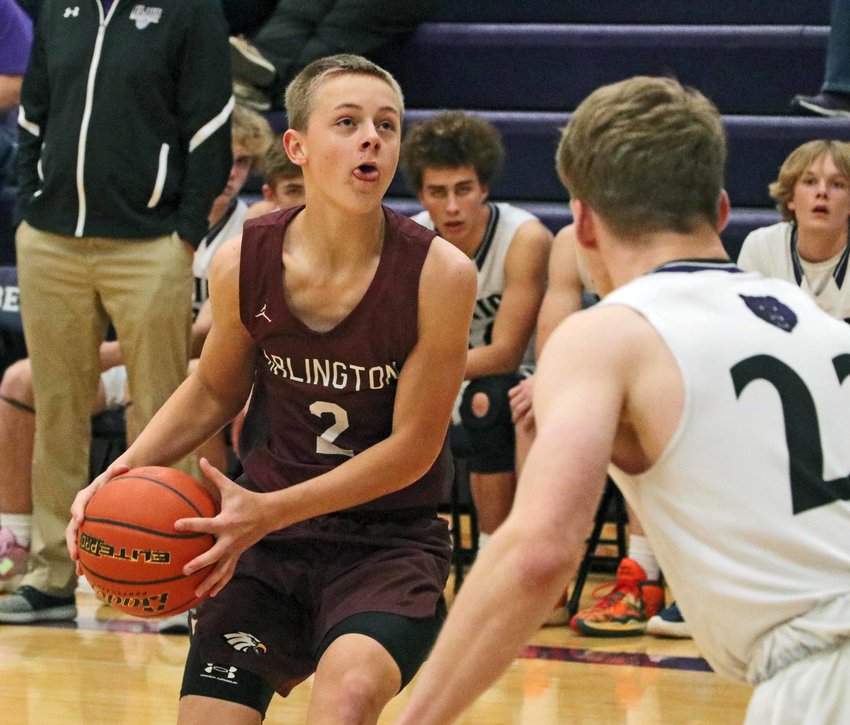 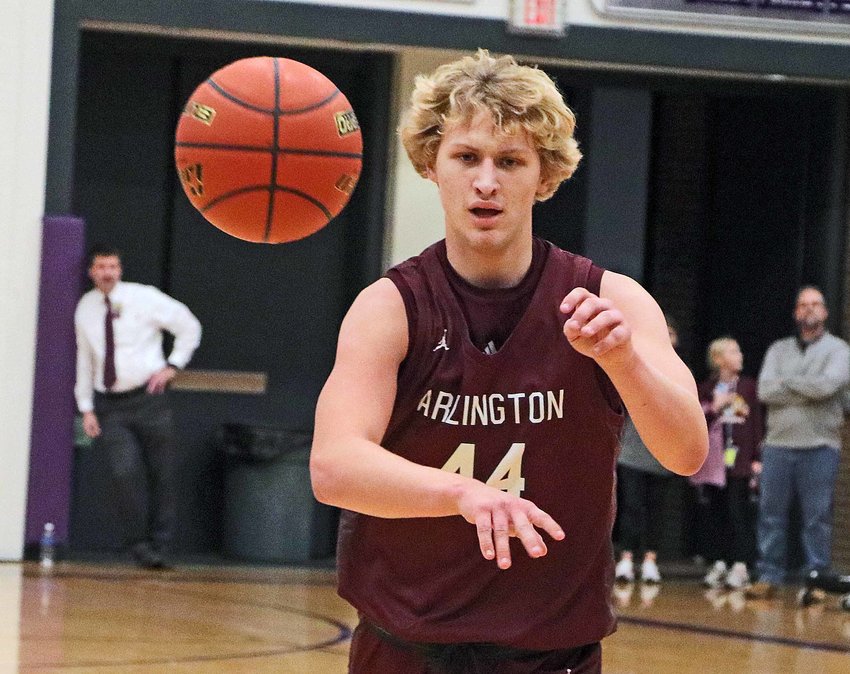 The Arlington and Blair boys basketball programs combined to lose 16 seniors to graduation last May.
If Monday's Jamboree exhibition game is any indication, the Bears are in the lead when it comes to replacing their nine-member 2022 class. They hosted and defeated the Eagles, 61-23.
Six-foot-2 senior Greyson Kay led coach Chris Whitwer's team — which reached its second-straight Class B state tournament last March — in victory with a game-high 21 points. He and his teammates held coach Tyler Spitser's AHS squad to just three second-half points, too, though Eagles freshman Oliver Ladehoff was able to score eight overall.
Arlington officially starts its season next Thursday against West Point-Beemer, while the Bears open against Ralston on Dec. 3.

Bears showcase pieces in win
Whitwer had no issue with how Monday's exhibition played out.
“I thought both teams played hard,” he said.
The Bears return just one starter — J'Shawn Unger, who scored nine points against the Eagles — from last year's 15-10 team, but showed both their ability to put up points and to shut a team down against Arlington.
Kay was a catalyst, scoring 21 with two made 3-pointers despite just a 3.2 points-per-game average a year ago. In comparison, Unger notched 8.2 a night as BHS' fourth-leading scorer last winter.
“(Greyson's) really matured a lot physically,” Whitwer said. “And just his game has matured a lot. He's really turned into a smart player for us and has a skillset that is really hard to defend.”
The guard plays good defense as well.
“He's a hard kid to get past, too, when he's moving his feet and being active,” the coach added.
Kay and Unger started alongside Elijah Morgan, Crayton Macholan and Bo Nielsen in the exhibition. Another contributor from last season's state team, senior Nolan Slominski, suited up, but did not play as he continues a return from offseason injury.
“He's been doing great in practice,” Whitwer said.
In addition to the aforementioned players, Blair's Ben Holcomb, Bo Meier and Nate Wachter played extensively against Arlington. Holcomb hit a pair of first period 3s, while the 6-foot-5 Meier represented his freshman class with nine points and a replay-worthy blocked shot.
“Those guys have put a lot of hours in,” Whitwer said of the young Bears, noting summer work with the team and without it. “You can just see the love of basketball. They have good basketball IQ, and I think they're all foaming at the mouth a little bit.”
BHS lost a fair chunk of its state-qualifying roster in May, but the coach sees a group hungry to fill in and continue the Bears' recent string of success.

Eagles start anew
Arlington will open the 2022-23 season with, essentially, a brand new varsity lineup.
Coach Spitser wants to find a reliable scoring threat within that lineup.
“We have multiple guys that have shown spurts and their ability to do it, but to do it consistently is a different story right now,” he said. “Hopefully, as the season goes on, someone can emerge and be that guy.”
Senior Weston Wollberg is the Eagles' most productive returner, though he notched just 1.1 points and 0.3 rebounds per game last winter. He scored two points against Blair on Monday, while Ladehoff and Darren Olson showed the ability to make 3s, combing for 14 total points.
“We have guys that can shoot,” Spitser said. “We're just streaky right now.”
The coach is looking for players willing to work and change the momentum of a game, particularly when things aren't going Arlington's way.
“I don't have eight or nine timeouts a half to use,” he said. “We need somebody to step up, and be vocal and be our floor general.”
Early on during Monday's exhibition, Olson's shooting and Trent Koger's work around the rim led the way to an 11-point first period. The latter 6-foot-6 sophomore kept the ball high when he had it in the post and showed an ability to score close during the opening quarter.
“Trent has the ability to bring a lot,” Spitser said. “We have high hopes that he has the potential to be a pretty special player for us.”
Overall, every Arlington basketball player — excluding the injured Kaden Foust — played Monday as the Eagles took a step toward their season opener.
“That's what this game is all about. Every kid we played tonight played no more than 2 minutes a game last year,” Spitser said. “A lot of new faces. A lot of young faces, but I'm excited to see them grow.”