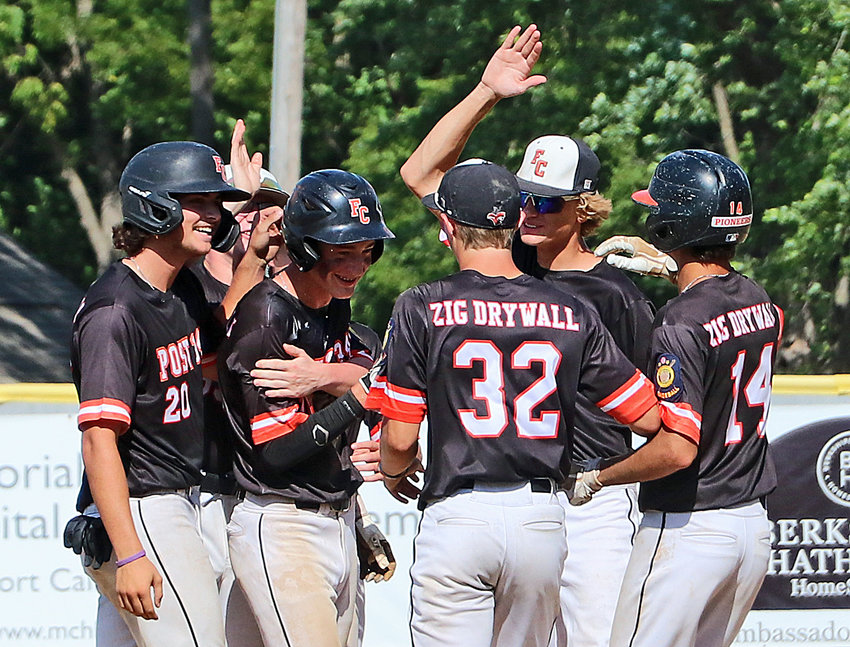 Fort Calhoun Senior Legion batter Sam Genoways, second from left, celebrates walk-off hit Saturday during the Class B Area 3 Tournament at Vets Field. The Pioneers came back from down five runs to beat Wahoo and extend their season.
Grant Egger 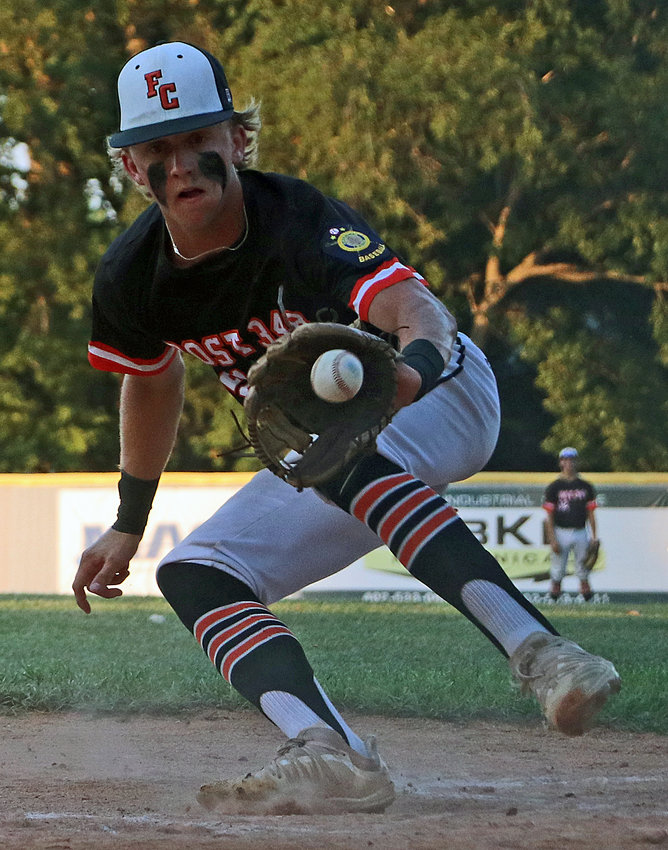 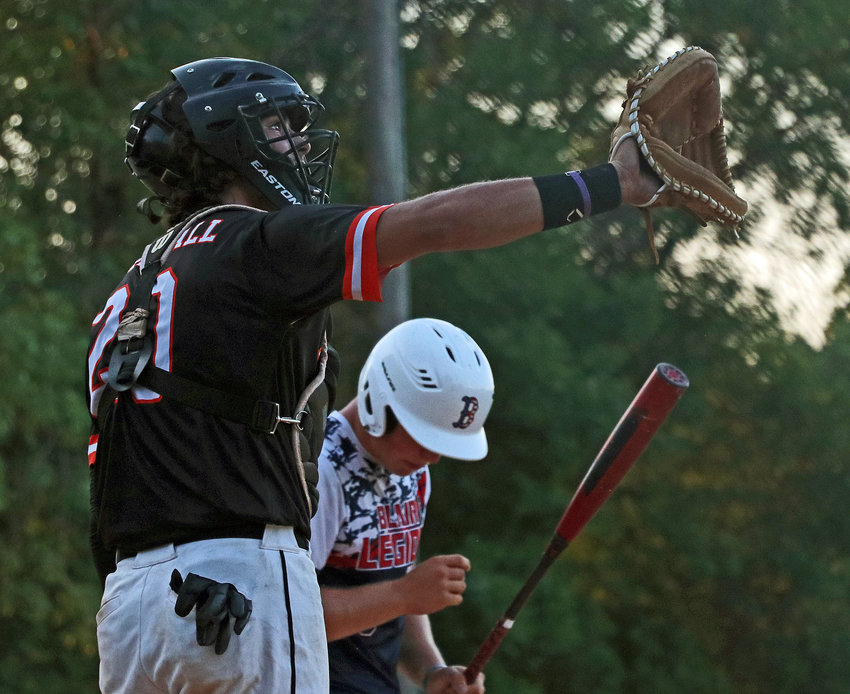 Fort Calhoun catcher Justin Myer, left, puts his glove up for a throw from his dugout Friday during a short delay at Vets Field.
Grant Egger 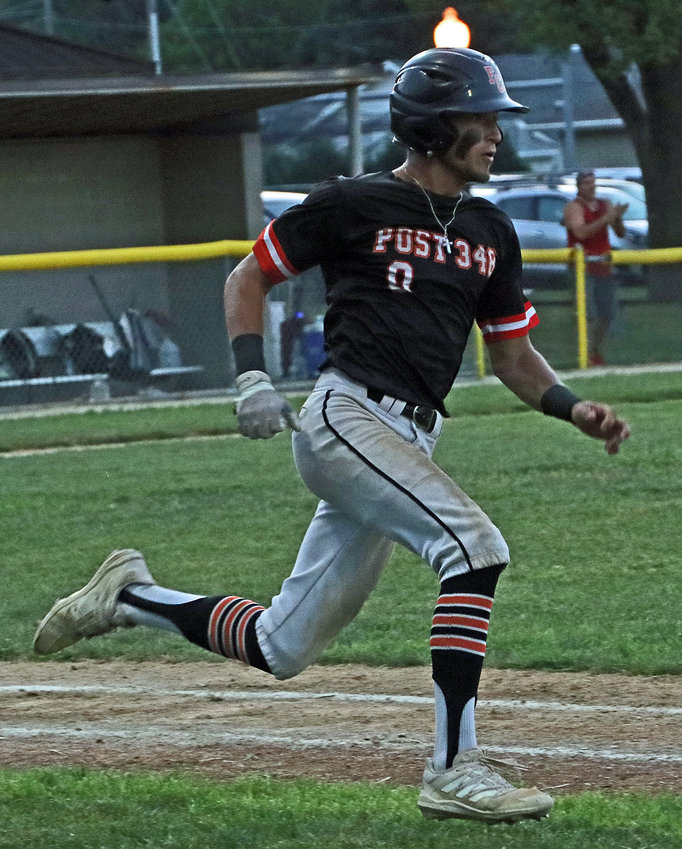 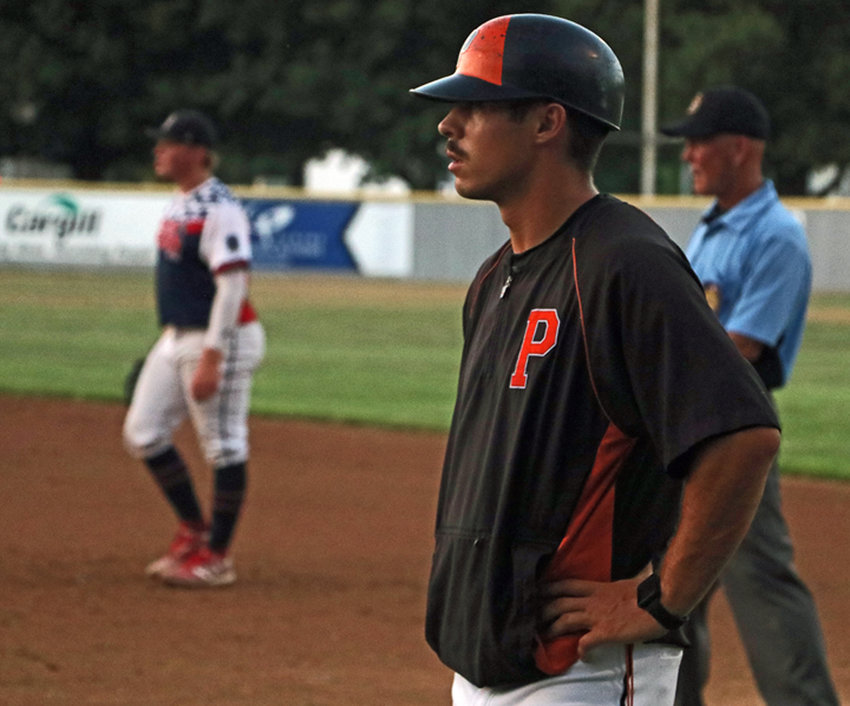 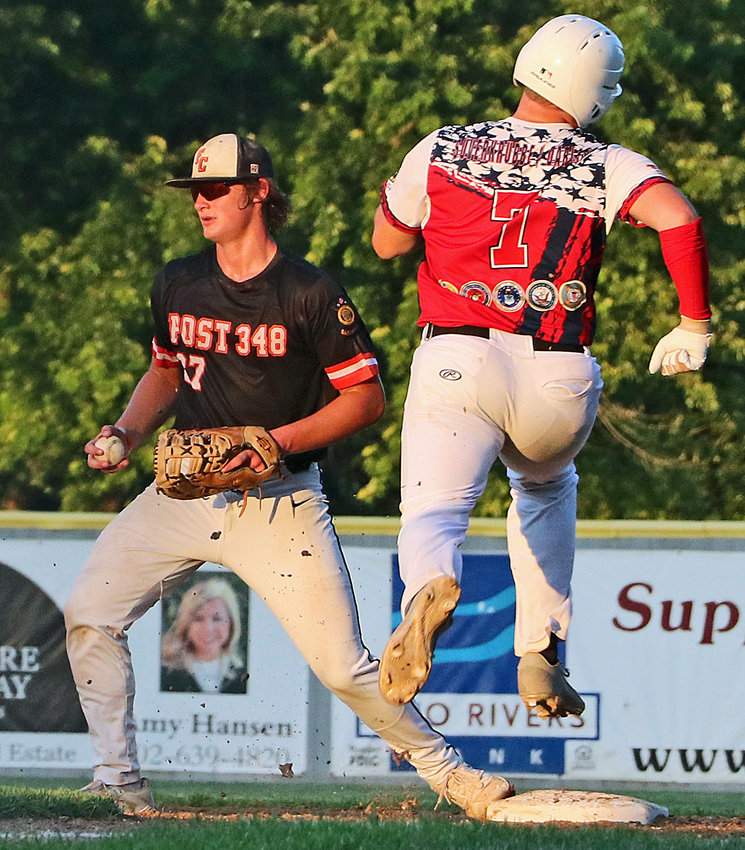 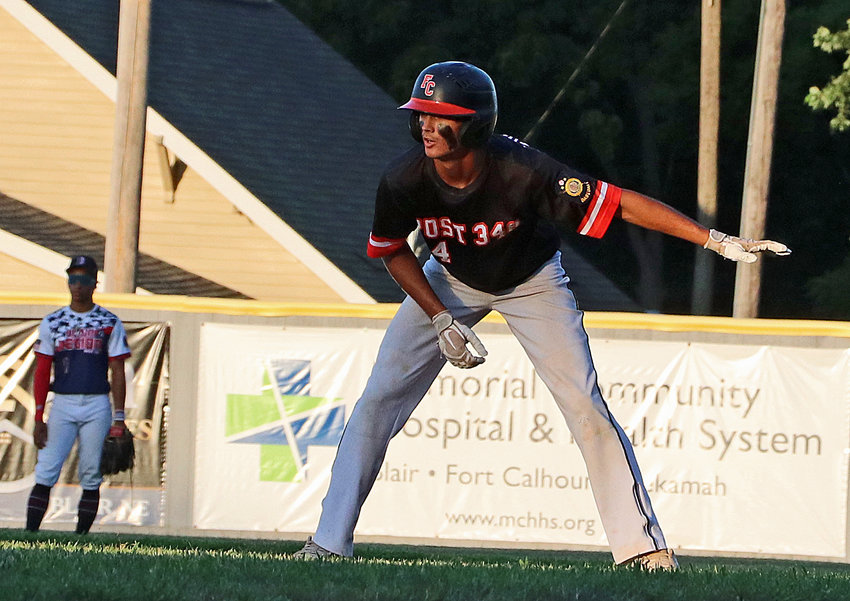 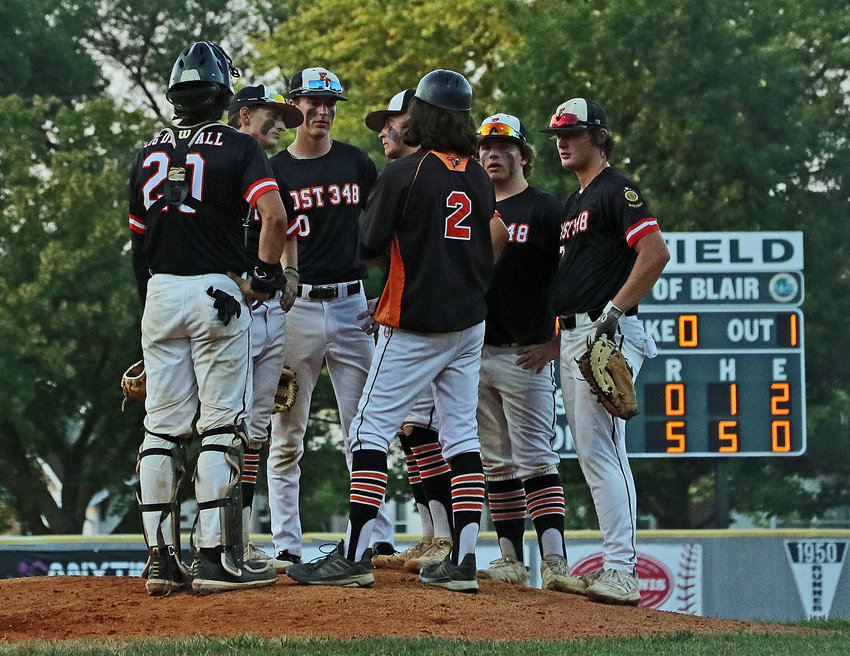 A year ago, the Fort Calhoun Senior Legion baseball team lost its Class B Area 3 Tournament opener 10-0 before going on a three-game winning streak to reach the final day of the tourney.
On Friday, the Zig Drywall Post 348 Pioneers lost their 2022 Area 3 opener against Blair by the same score, 10-0.
Could coach Brandon Wynn's team win its way back into contention again?
“You can't just hope that it happens,” he said, standing under the Vets Field lights after a difficult night. “You've got to show up and make it happen.”
Then, in the sixth and seventh innings Saturday against Wahoo, Fort Calhoun answered the call. Six unanswered runs capped by Sam Genoways' walk-off hit into the outfield resulted in a 9-8, come-from-behind victory. It eliminated the Pioneers' opposition, while extending their own season.
“We didn't want this to be our last day,” outfielder Tristan Fuhrman said. “So, we made sure of that.”
Post 348 was set to continue tournament play Sunday. An update from that game and more can be found online at enterprisepub.com/sports and inside this Friday's Washington County Enterprise edition.
To start the comeback from 8-3 down, Fuhrman notched a two-out single. From there, Ty Hallberg reached base and helped his teammate home on a double-steal.
After a Wahoo pitching change and Justin Myer's walk, Genoways added his second and third RBIs of the ballgame on a blast to the left field wall. Zach Faucher's RBI single then cut his team's deficit to 8-7 before the sixth frame went final.
“Going in, hitting there, you just wanted to do the best you can for your team,” Genoways said.
Pitcher Levi Lasher stepped on the mound for the top of the seventh inning and got the Pioneers back in to bat still down just one. They started earning base runners immediately.
Lasher sandwich singles around Avery Quinlan's sacrifice bunt, bringing Fuhrman back up to the plate.
“We had all the opportunity in the world to score those runs easily,” he said.
The outfielder's RBI swing tied the game before, two batters later, Genoways produced the game-winning hit to right field.
“So, I haven't been hitting great the last few games, but today I came back and did pretty well,” he said. “I've been working with my dad a lot in the cage and I'm starting to feel better. More confident.”
Fuhrman, a recent graduate, said he'd talk to a few younger teams going into all of their last at-bats that his could be his last in a Fort Calhoun uniform altogether.
In the end, it wasn't. The Pioneers responded to a lopsided loss with a season-saving win in comeback fashion. Genoways knocked in four runs, Fuhrman three and Faucher one.

Post 348 drops opener, 10-0
The Pioneers struggled from the start Friday against Blair, though.
After a scoreless top of the first inning, Post 154 lead-off batter Ethan Baessler reached third base when the Fort Calhoun defense committed an error on the first ball they fielded in Area 3 tourney play.
“Set the tone for the whole game,” coach Wynn said. “And I think everyone kind of felt it.”
Baessler and three more Bears would score as the home team took a 4-0 advantage. The runs added up during the next three innings, and coach James Bilslend's squad won 10-0 in just five.
Overall, Blair outhit Post 348 11-3 for the game.
“They were ready to go,” Wynn said, noting that his team wasn't.
In total, Fuhrman, Quinlan and Harrison Schmitt notched a Post 348 hit each against their opposition's pitching. Fuhrman, Myer and Carter Christensen drew walks, too.
No Fort Calhoun base runners scored, however. Their best shot may have been when Christensen, Schmitt and Hallberg all reached base during the third.
Hallberg suffered the pitching loss, too, despite three strikeouts. He allowed nine earned runs across three innings before Kenny Wellwood stepped in a threw the one-run fourth frame.