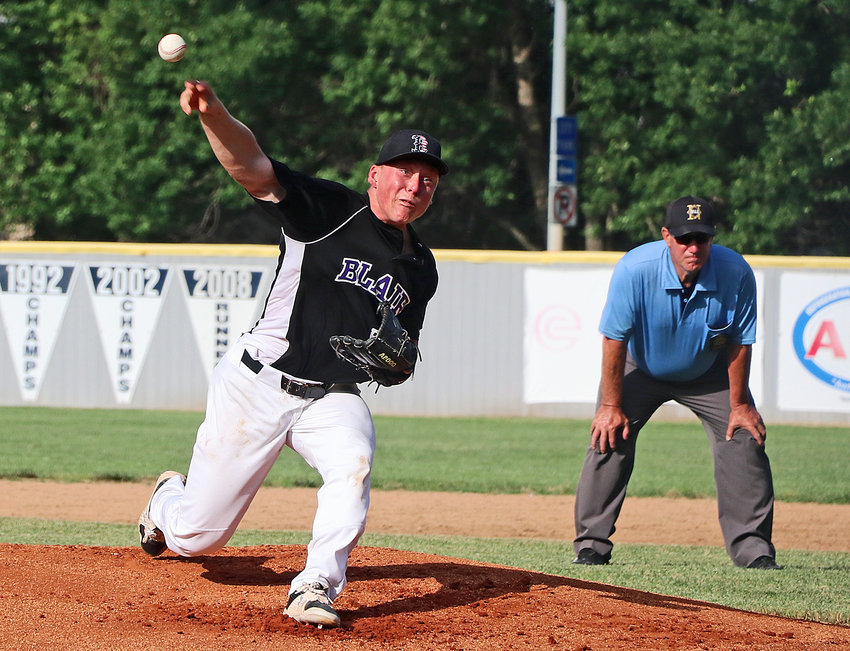 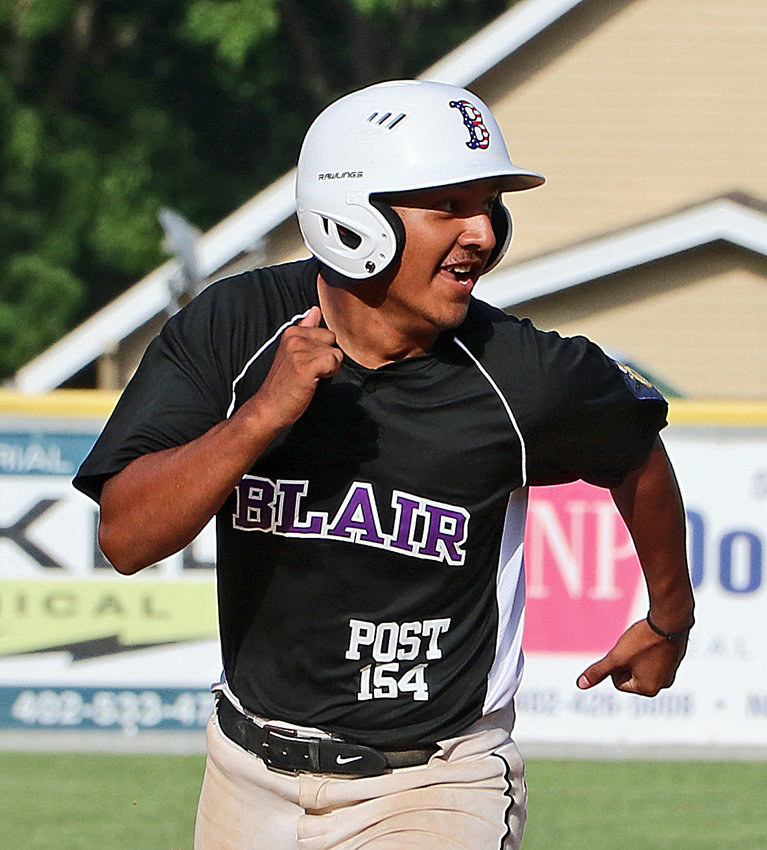 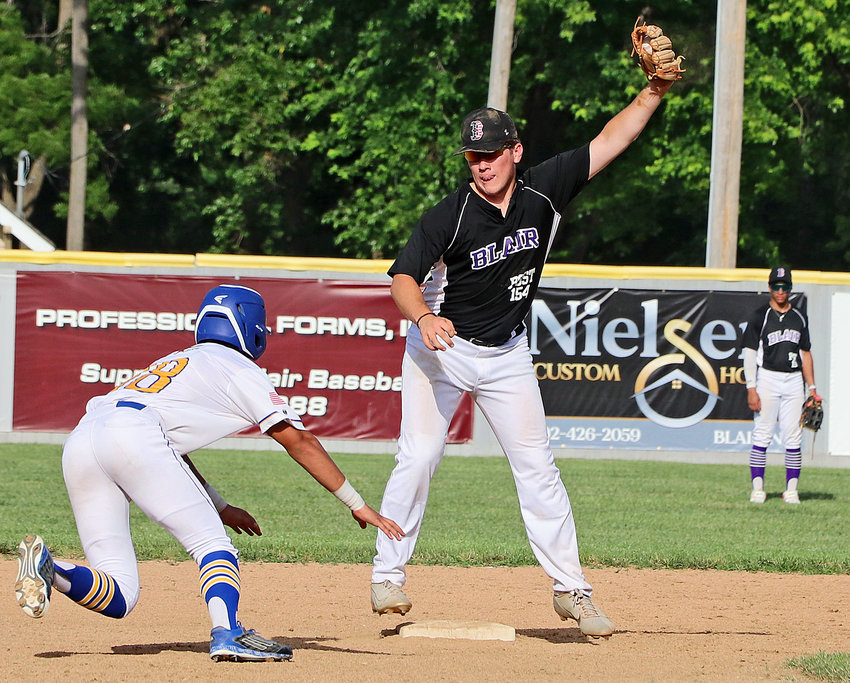 Blair infielder Morgan Rump, middle, gloves the ball and turns to tag out a Gering base runner Saturday at Vets Field.
Grant Egger 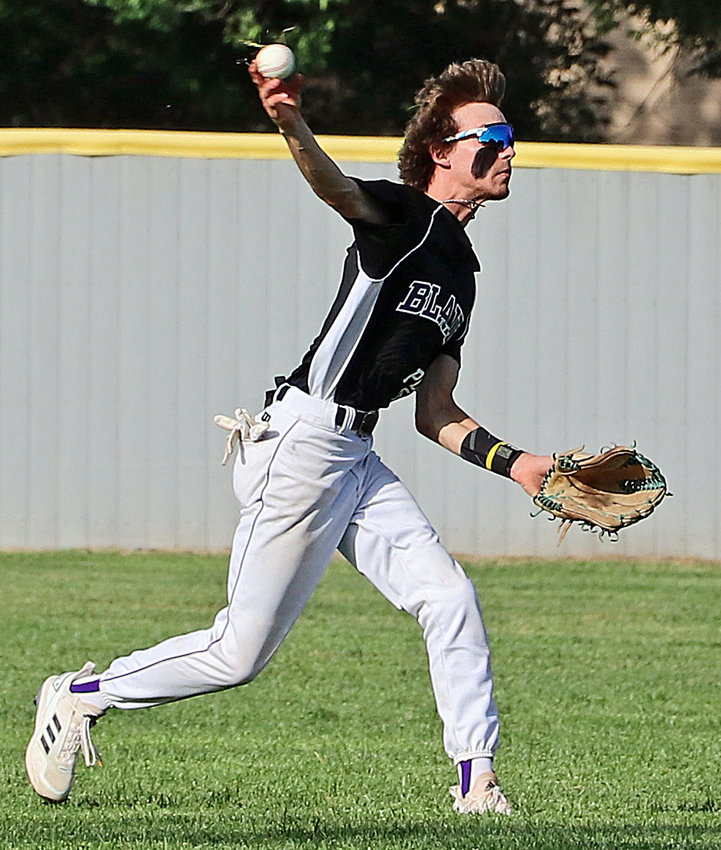 Blair outfielder Kaden Fletcher throws the ball into the infield for an out Saturday at Vets Field.
Grant Egger
Previous Next
Posted Tuesday, June 21, 2022 11:52 am
POST 154 SENIOR LINE SCORES

The Blair Senior Legion baseball team defended its home diamond across nine innings Saturday night.
The Post 154 Bears led 5-1, saw Gering come back to even the score and, eventually, won the game 8-5 on Vets Field. The pre-planned nine-inning contest — two more frames than the usual seven in American Legion play — pushed the home squad's season record to 8-5.
“It went by quick,” Blair coach James Bilslend said. “Two hours and 30 minutes for a nine-inning game, that's good.”
The Bears earned an early advantage shortly after Gering scored the game's first run during the top of the second inning. Morgan Rump led off the bottom half with a single before Nate Wacther walked and Greyson Kay plated a run with a sacrifice fly.
Even at 1-1, Post 154's Lee Chavez-Lara — a courtesy runner for Wachter, the catcher — scored the go-ahead run on a failed pick-off attempt at first base. Tyler Andersen's contact swing into a Gering error later scored the Bears' third run represented by Kaden Fletcher, who'd earlier earned a free base on balls.
The home team's lead grew from there, but its visitor from western Nebraska answered. Gering tied the game before Blair pitcher Tyler Andersen bounced back, threw another scoreless inning and made way for Chavez-Lara to replace him to close the home game out.
“He shut the door,” Bilslend said of his relief pitcher.
Notable highlights during the three-run victory were a Bo Nielsen throw from left field for an out at home plate and a Wachter home run blast over the outfield fence.
At the end of 8.5 frames, Post 154's centerfielder, Fletcher, squeeze the final out.
Before its game with Gering, Blair also beat Nebraska City on Friday. With a 5-4 hits advantage, the Bears won 6-1 at Vets Field.
Dylan Swanson led Post 154 at the plate, going 2-for-2 with a double. Rump, Kay, Nielsen and Eli Morgan, meanwhile, earned RBIs.
Rump was also the victorious Blair pitcher, throwing a complete game with six strikeouts.

Juniors win 2
The Blair Juniors won back-to-back games Friday and Saturday, improving to 3-6 this summer. They first beat Nebraska City 8-7 before an 8-0 win at Omaha Gross.
The Junior Bears next compete 5:30 p.m. today at Wahoo before a Wednesday home game against Omaha Roncalli with the same start time.