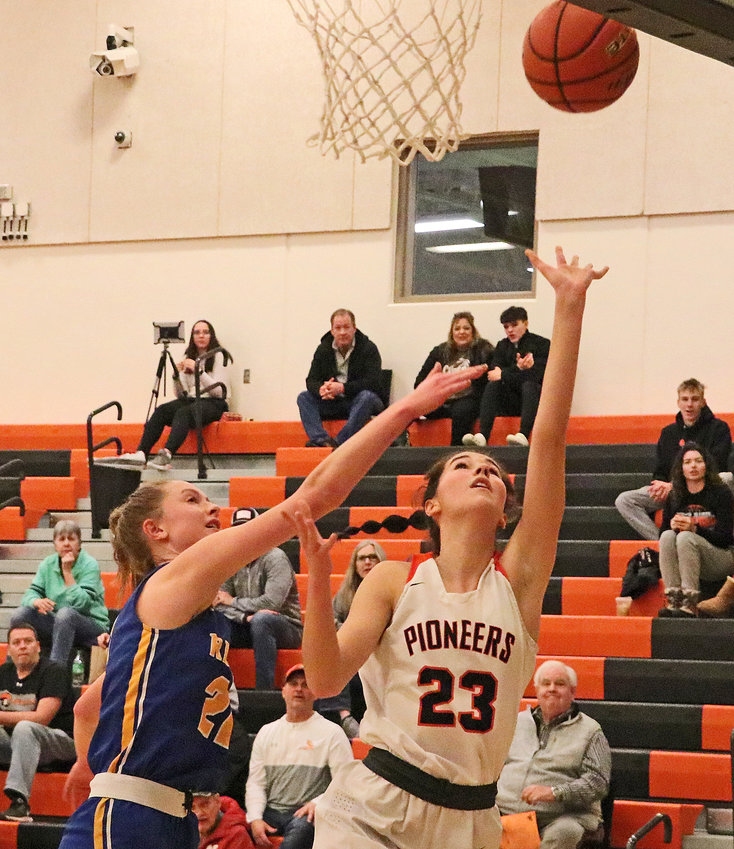 The Pioneers' Bria Bench, right, scores a basket off of the glass Saturday in a Nebraska Capitol Conference Tournament game against Logan View/Scribner-Snyder at Fort Calhoun High School.
Grant Egger 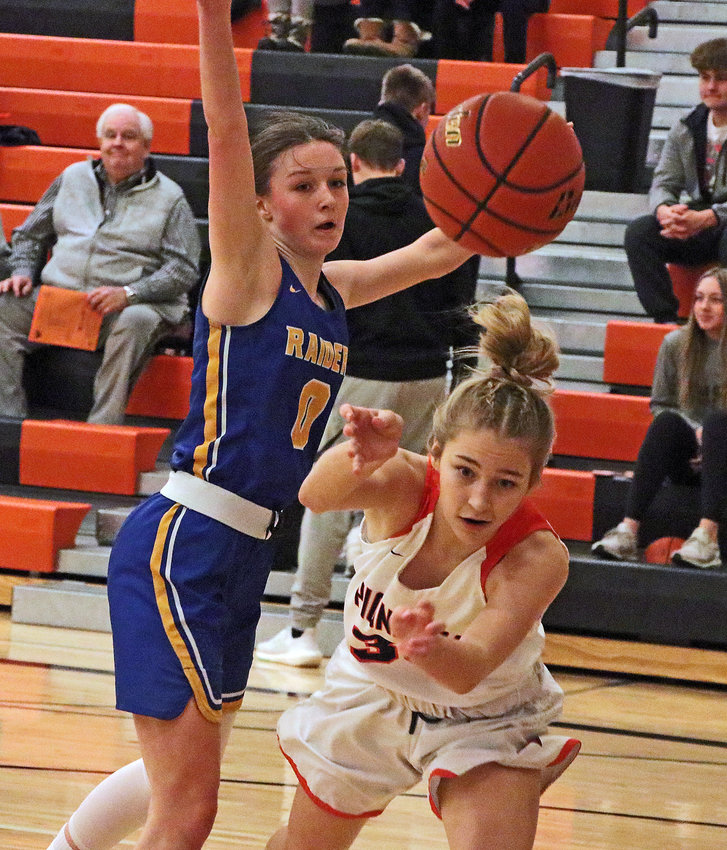 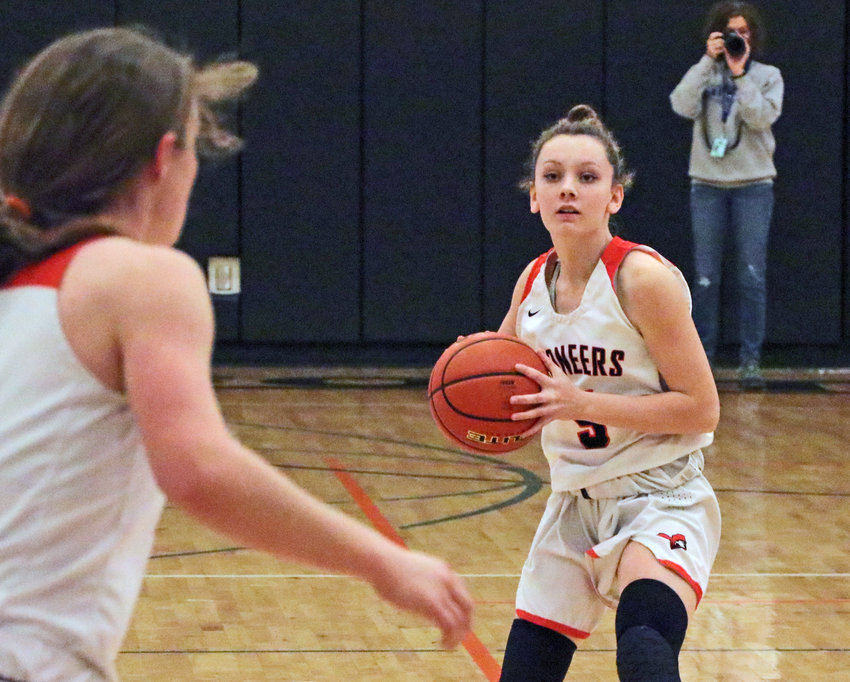 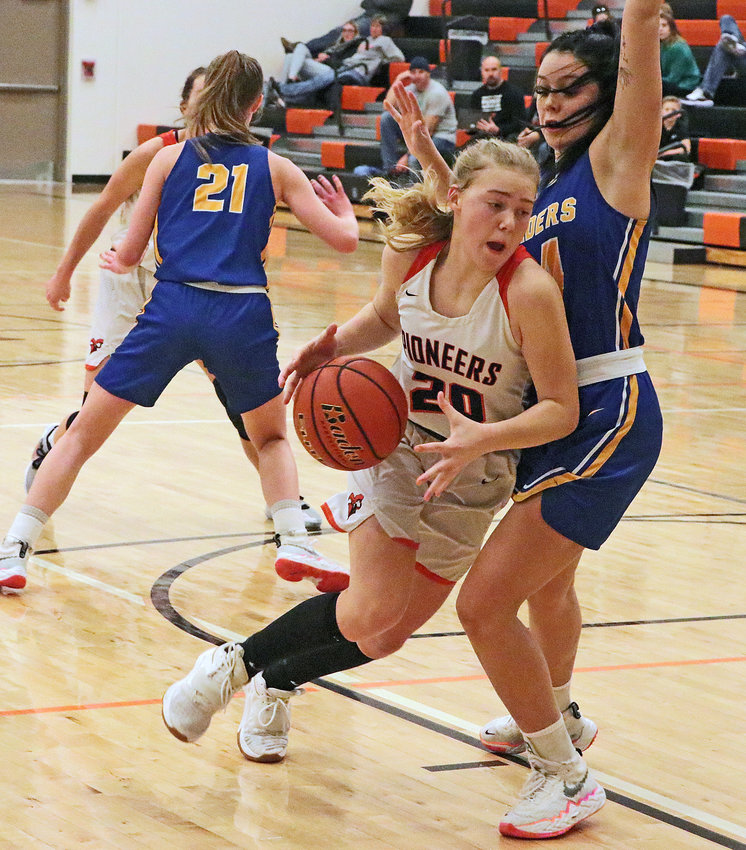 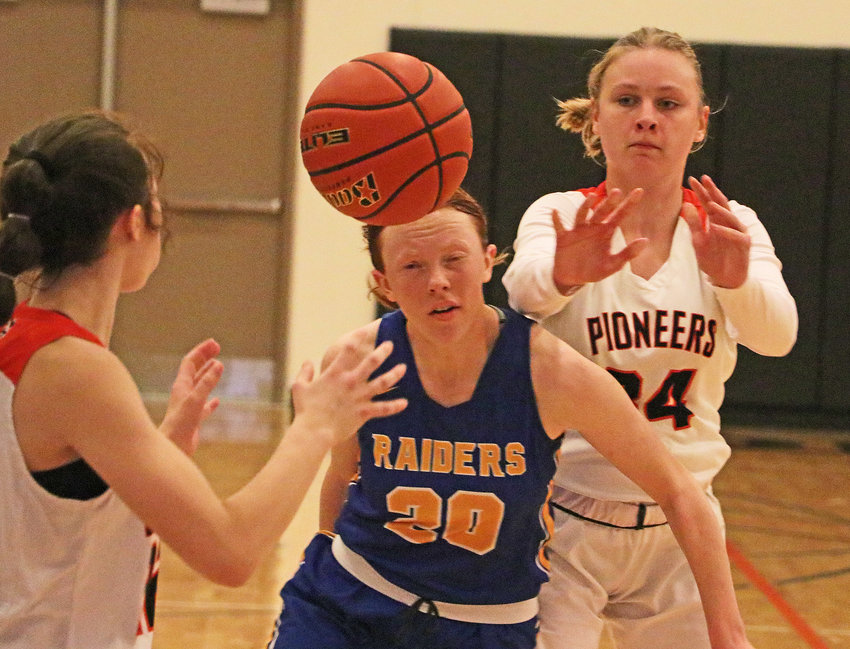 Junior Bria Bench scored her 21st point from the foul line Saturday, tying a first round Nebraska Capitol Conference (NCC) Tournament game against Logan View/Scribner-Snyder with 5.3 seconds left in regulation.
From there, though, the Fort Calhoun girls basketball team missed eight-straight from its home charity stripe. The Raiders (6-9 overall) took advantage, winning 53-48 in overtime.
Instead of a second-round game against top-seeded Yutan, coach Marty Plum's Pioneers (7-10) will now play an NCC consolation game Friday. Bench said her team's level of disappointment was high.
“It was pretty tough,” she added. “Probably an eight or nine (out of 10).”
Trailing 32-31 after three periods, FCHS took over the lead early in the fourth when Bench finished an and-1 play at the 7-minute mark. A Maelie Nelson basket and three more Bench free throws pushed the advantage to five points, too.
The Raiders pulled even at 44-all later, but Jovi Greiner's second made jump shot of the quarter gave the Pioneers the lead again. They just couldn't turn their advantage into a victory.
“Just finishing, in general, was a struggle for us,” Bench said.
The 5-foot-10 forward scored 21 points with eight 2-point buckets and a 5-for-6 showing from the free throw line. Most of her field goal makes came within the lane as she displayed a shooter's touch from all angles.
“I was just on today more than I was the past few games,” Bench said. “It felt really good to get touches there.”
Fort Calhoun freshman Ella Bouwman added nine points, including all three of the Pioneers' overtime total. Greiner and Nelson had six points apiece, too.
Cadynce Stockamp, meanwhile, scored 14 to lead Logan View's road effort. She was 3-for-4 from the line overall as her team went 6-for-6 during the extra period.
“If I could of just made one more free throw, we could've probably won,” Bench said as she left the locker room hallway Saturday afternoon.