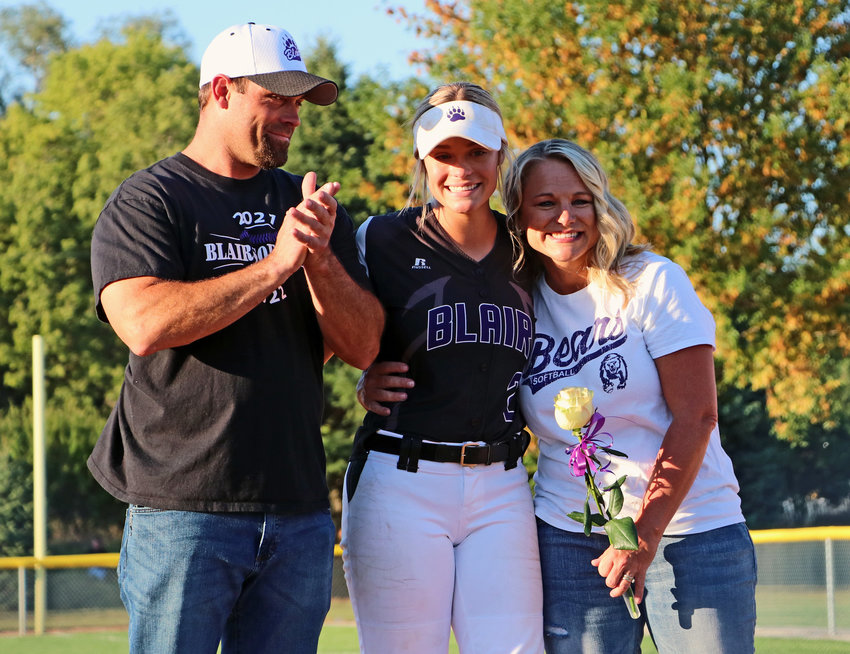 Before Tuesday night's game on the Blair Youth Softball Association diamond, the Class B No. 8 Blair Bears embraced and celebrated their lone senior — Jerzie Janning.
After it, the Bears screamed in delight, sharing more hugs after freshman Brooke Janning — the Senior Night honoree's little sister — plated the game-winning run during the bottom of the eighth inning. Coach Jennifer Fangmeier's BHS squad bested No. 10 Elkhorn, 8-7, earning a measure of revenge after the Antlers routed the Bears days earlier during the Eastern Midlands Conference Tournament.
Elkhorn (9-8 overall) held a 6-4 advantage over Blair entering the bottom of seventh inning despite RBI knocks by Kalli Ulven, the winning pitcher, and Tessa Villotta during the first six. The lead wouldn't last much longer, though, after Leah Chance reached base.
As the Antlers changed pitchers, young Blair softball players in the crowd — who were invited guests for Senior & Youth Night festivities — started rousing chants. Spurred on, the Bears loaded the bases with both Nessa McMillen and Villotta joining Chance.
An out later, Blair's Claire Mann provided the two-out, two-RBI single needed to even the game at six runs and send it into extra innings.
First, during the top of the eighth frame, Elkhorn notched a go-ahead run to lead 7-6. Undeterred, Greta Galbraith made contact with an Antler pitch to score baserunner Audie Keeling during the bottom half.
From there, Reese Beemer walked and Chance hit an infield single to set-up Brooke Janning on Jerzie's big night. After a long at-bat that took more than 5 minutes from first pitch to last with multiple foul-offs, the freshman lefty delivered, sending the ball into right field and plating Galbraith for the walk-off run.
The eighth-ranked Bears were scheduled to play at Waverly on Thursday and next compete Sept. 25 in Lincoln. The junior varsity, meanwhile, hosts a Millard North doubleheader Monday at 4:30 p.m.