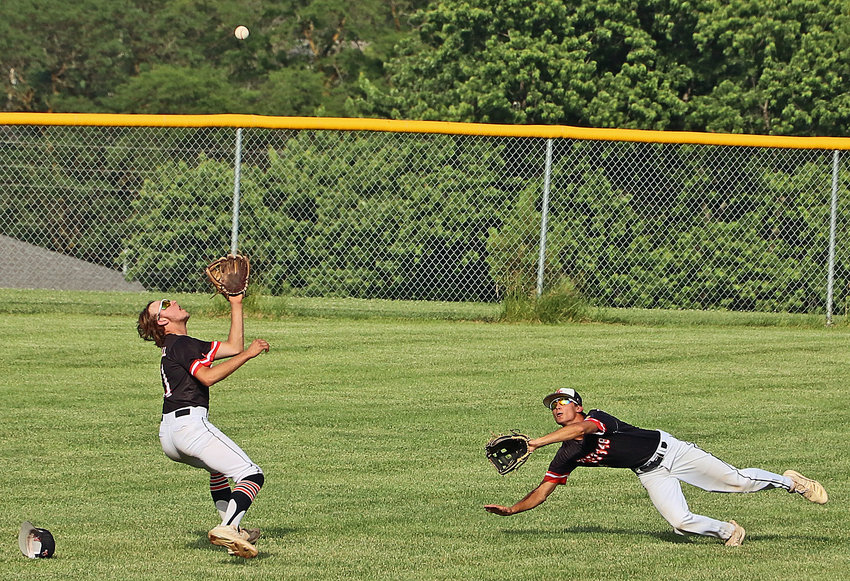 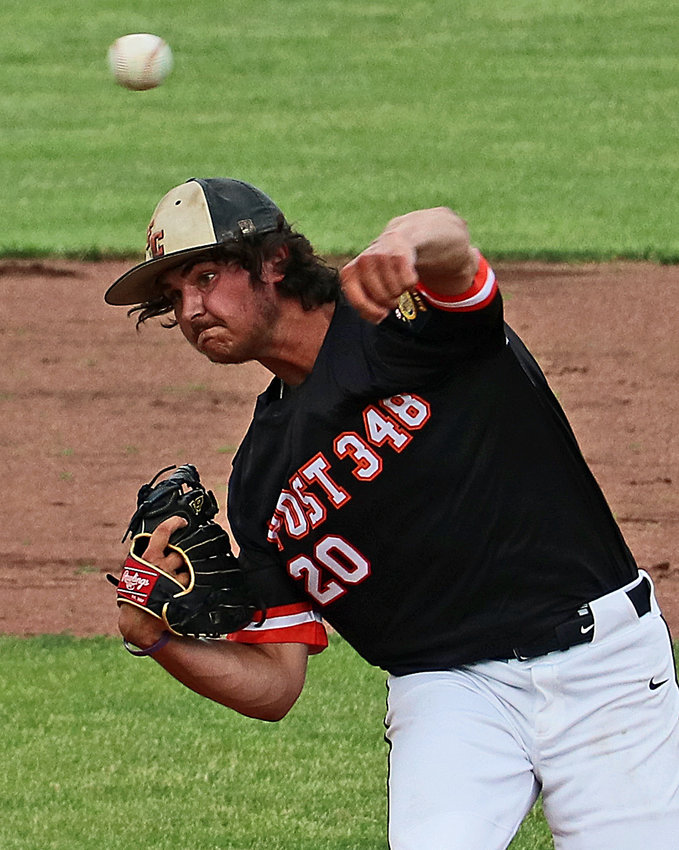 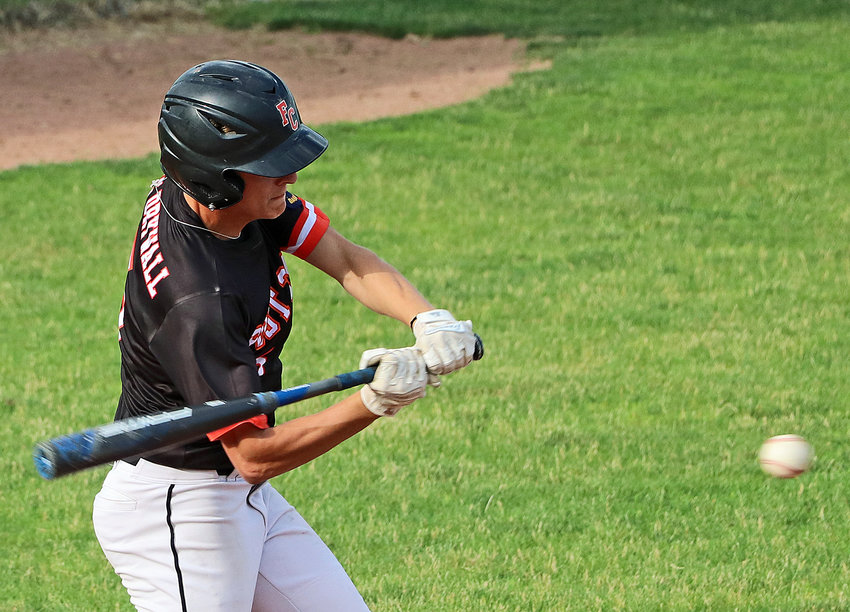 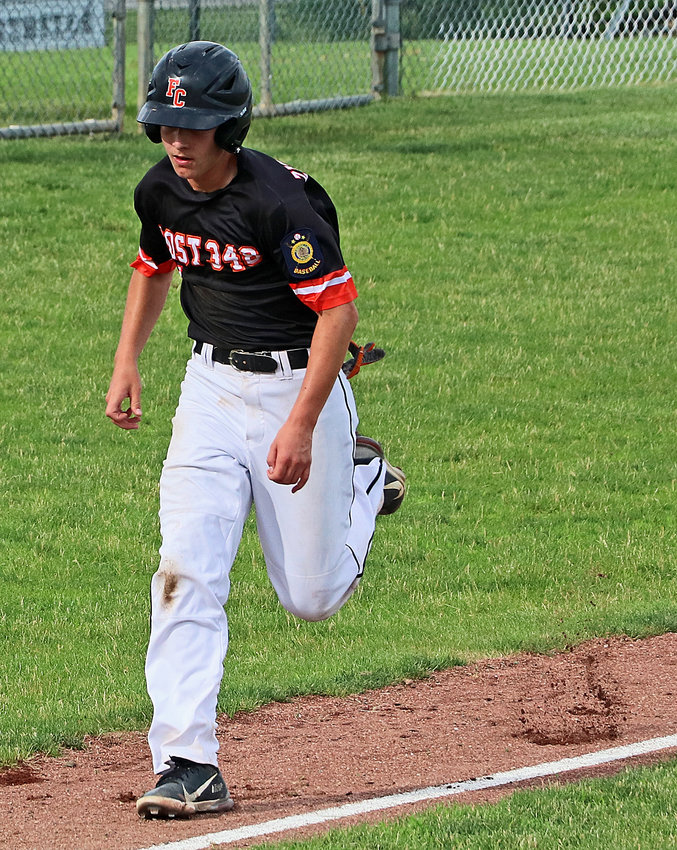 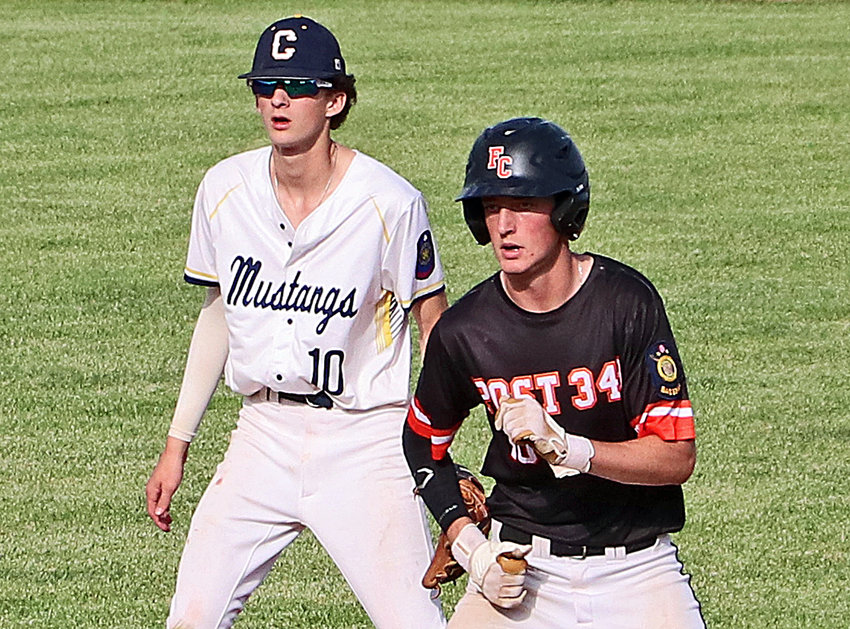 Fort Calhoun Senior Legion base runner Sam Genoways, right, leads off of second base in front of the Concordia shortstop Thursday at the Omaha Home for Boys.
Grant Egger
Previous Next
Posted Tuesday, June 21, 2022 11:49 am
POST 348 SENIOR LINE SCORE

Fort Calhoun Senior Legion outfielder Tristan Fuhrman loudly called off Avery Quinlan and second baseman Sam Halford to catch the final flyout of Thursday's game at the Omaha Home for Boys.
“It was kind of right in the middle of everyone,” the Pioneer said. “So just, you know, as a centerfielder you kind of have to catch that ball.”
Earlier during Zig Drywall Post 348's 9-1 win against Omaha Concordia, Fuhrman found himself in a similar situation. He made a late call for the ball and took Ty Hallberg's right shin to the head when diving for a pop fly the shortstop caught.
“We were both trying to make a great effort on the ball,” the centerfielder said. “He can dive for it and catch it, and I can dive for it and catch it.”
The contact-play ended the inning and, fortunately, left Fuhrman uninjured. It shocked him, but didn't hurt him as both Hallberg and he left the dugout smiling with their Fort Calhoun teammates after their second win of the summer season.
The Pioneers took control early, scoring an early 6-0 advantage.
“We started off that with the bottom of our order because that was in the second inning,” Fuhrman said. “So, that was really good for those guys.”
Harrison Schmitt led off the frame with a bloop single to left field before Kenny Wellwood bunted into an error. Schmitt later scored on another Concordia miscue before Fuhrman knocked in both Wellwood and Carter Christensen.
Ahead 3-0, Post 348's Sam Genoways made contact into a third error, allowing Fuhrman to score and later leading to Zach Faucher's RBI single. Avery Quinlan, who ran the bases for starting pitcher Justin Myer, scored the sixth and final run of the inning.
“It's a lot of pressure off when you have a lead like that,” Hallberg said.
After Fuhrman and he met in shallow centerfield on the aforementioned fly ball, Hallberg filled in for Myer on the mound and finished out the last four 4 2/3 innings. He struck out four as Myer earned the win.
“My slider was working real well for at least the first two innings — or three,” Hallberg said. “Then they started to catch on, but they still couldn't piece it up.”
At the same time, the Pioneers added three runs after their productive second frame. Myer hit an RBI single, Schmitt scored from third base on a balk and Fuhrman added the ninth run on a passed ball.
Concordia earned base runners during the Thursday night ballgame themselves, but couldn't get more than one across home plate. The collision play, for instance, came with two out and the bases loaded.
“That game could have been a lot different,” Furhman said. “But we did well on offense and defense.”