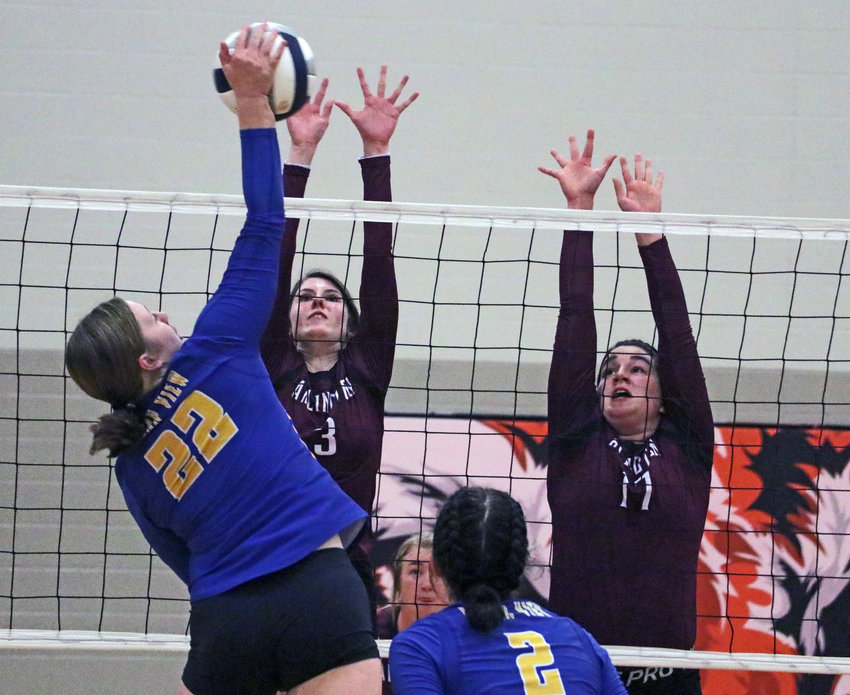 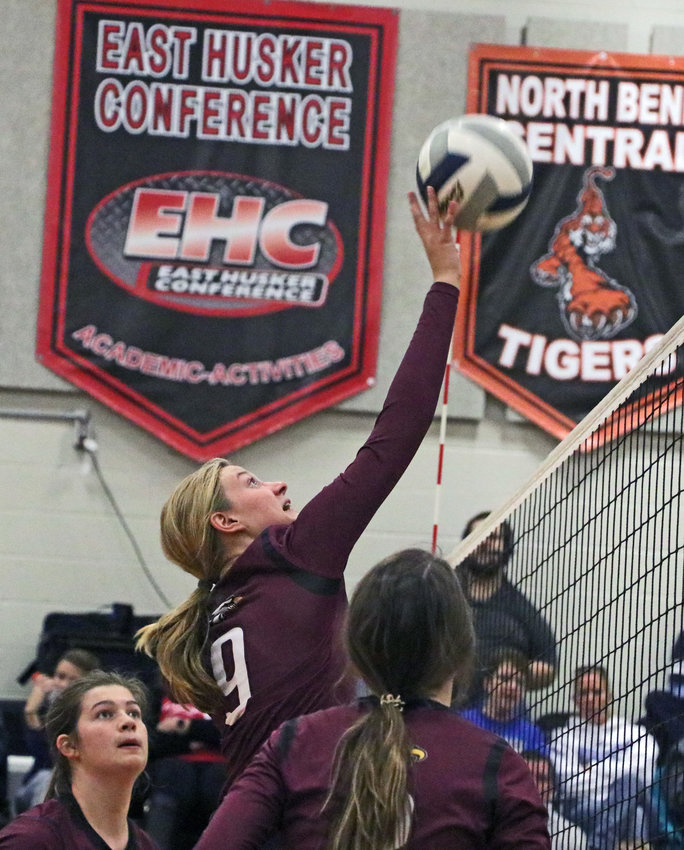 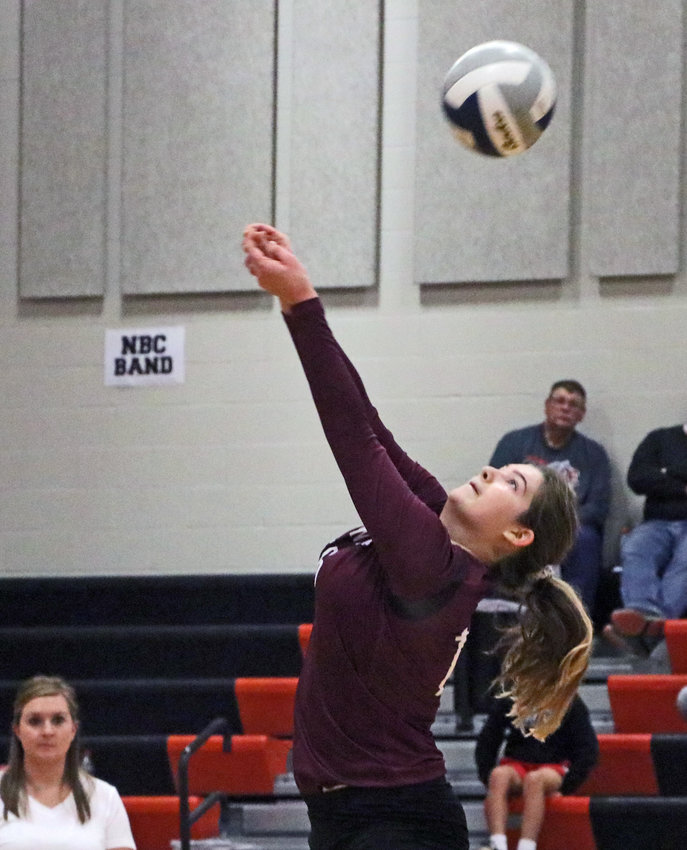 Arlington senior Kate Miller hits the ball over her head and the net Monday at North Bend Central.
Grant Egger 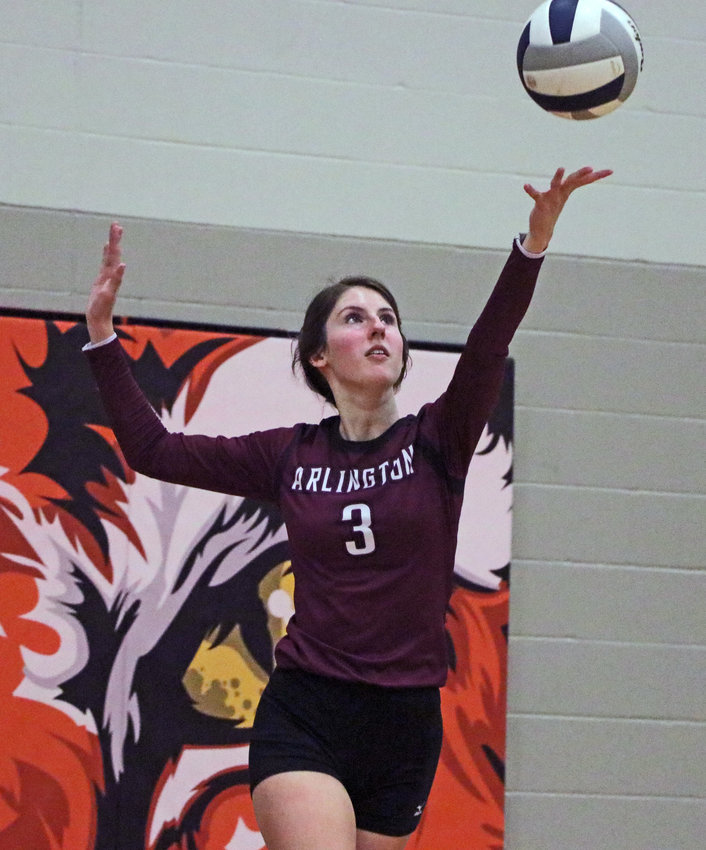 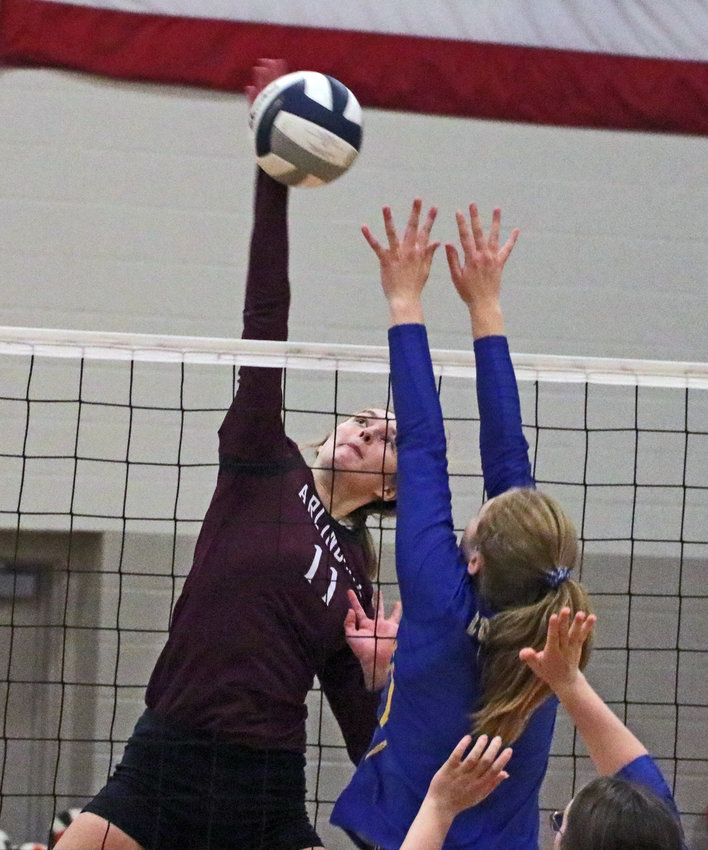 Monday's season-ending loss during the Class C1-6 Subdistrict Tournament felt premature to the Arlington volleyball team.
The Eagles were 14-7 this fall before dropping their last five matches with one of their senior standouts out injured. Nebraska Capitol Conference all-conference performer Kailynn Gubbels was one of the AHS 12th-graders who had tears in her eyes as Logan View/Scribner-Snyder ended her team's season 3-1 at North Bend Central.
“It was tough, obviously, to hold back the tears for all of them,” coach Katarina Nelson said.
While Gubbels watched the final points from the bench, injured, Chase Andersen and her teammates became emotional on the floor.
“It breaks your heart to see a really, really good team go out so early in subdistricts when I know they had a chance at state,” Nelson said. “It's tough to see your players hurting.”
Arlington lost the second, third and fourth sets to the Raiders, but won the first 30-28. Andersen started it right when she recorded a kill for a 2-1 lead.
Fellow senior Cassidy Arp scored an ace serve for a 6-4 advantage before her sister, Taylor Arp, made it 9-6 with a kill through a Logan View block.
The Eagles and Raiders then battled back-and-forth during the middle and later stages of the set. Kate Miller's ace followed up another Andersen kill for a 1-0 match advantage.
“Our hustle was really good on the court,” Nelson said. “Going after every ball.”
But hustle alone wasn't enough to top Logan View, which improved to 13-17 with the win. Austyn Flesner, Andersen, Lizzie Meyer and Miller notched kills during a 25-20 second set loss. The Raiders earned the same score in the third and won the fourth 25-16 despite a pair of late kills by Andersen and Miller, who were assisted by fellow senior Janessa Wakefield.
When it was over, senior libero Stella Lewis, her AHS classmates and teammates went through the handshake line, grabbed their water bottles from the bench and went straight to the locker room. The coaches — Nelson, Stacy Dunklau-Nelson and Chrissy Rydl — were the first to emerge.
“Everyone's talking about the seniors,” Nelson said. “Their leadership. That they're a special group.”
The team built strong bonds over the course of its winningest season since 2017 — before the senior class ever reached high school.
“It was a lot of fun to coach that group,” Nelson said.
The rise, she added, was fun to be apart of.
“In the middle of the season they started to have confidence,” the coach said. “Instead of, 'We know we can hang with the good teams,' they started to talk about how 'We are one of the good teams.'”
The 2021 Arlington Eagles were a good team that believes its season ended prematurely.