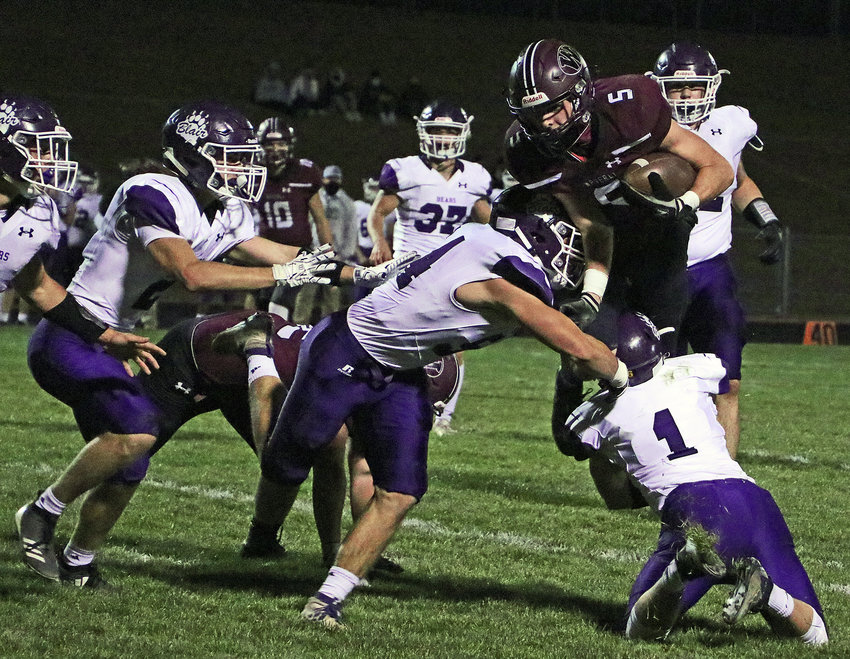 The Vikings' Zane Schawang tries to hurdle Blair Bears but is intercepted by Kip Tupa, bottom right, and Braden Hanson on Friday at Waverly High School. The Vikings topped the Bears 42-8 during the first round of the Class B playoffs.
Grant Egger 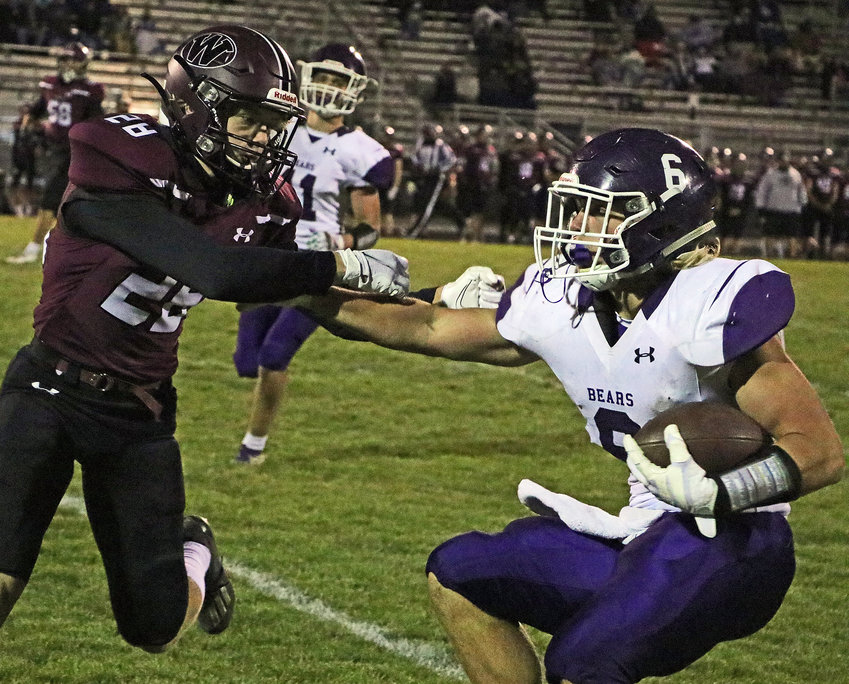 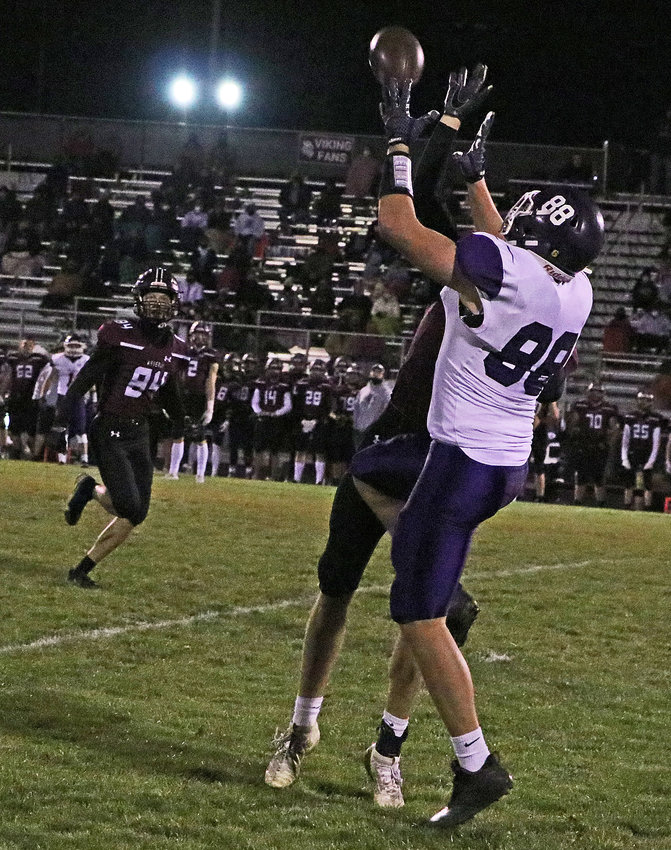 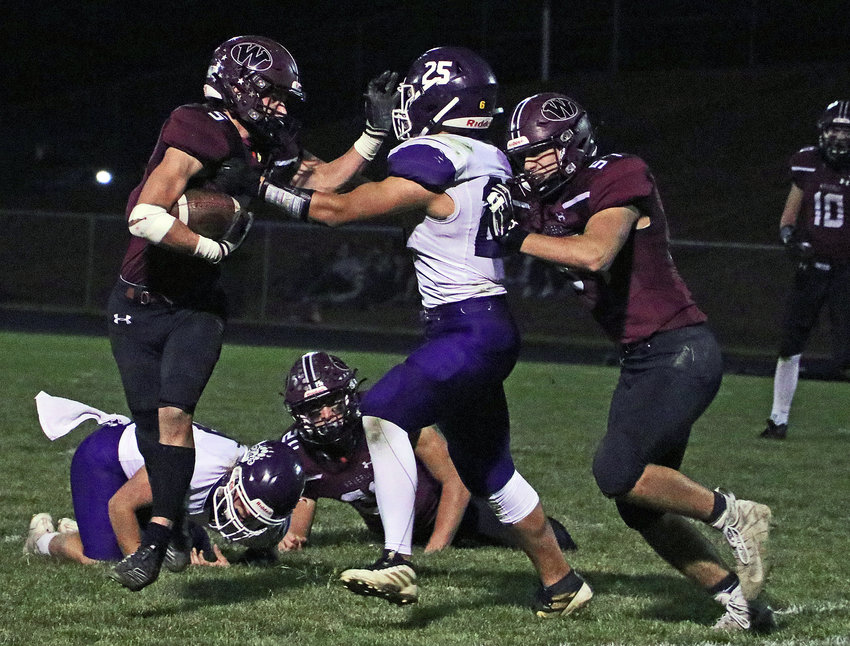 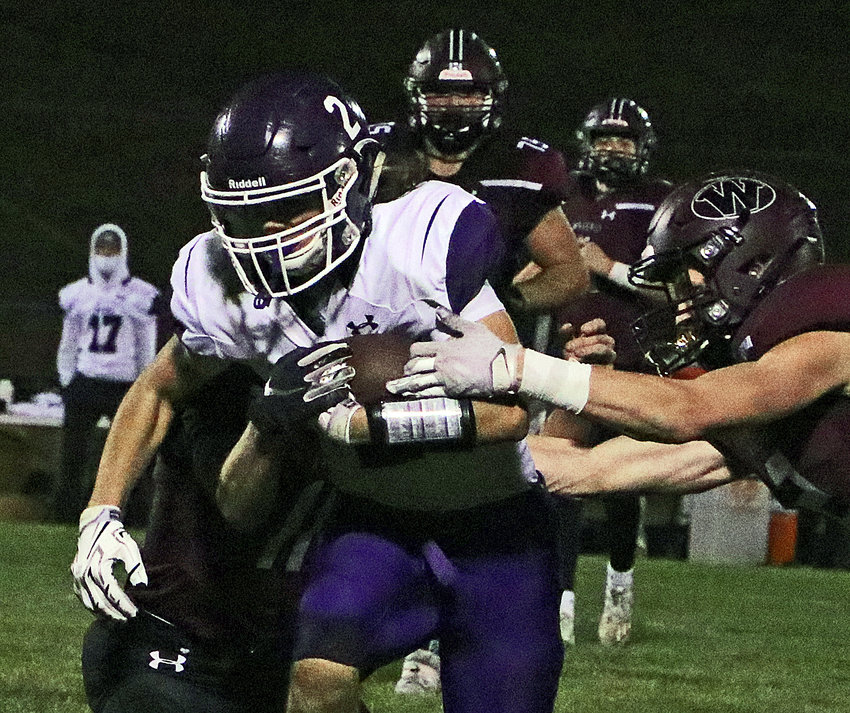 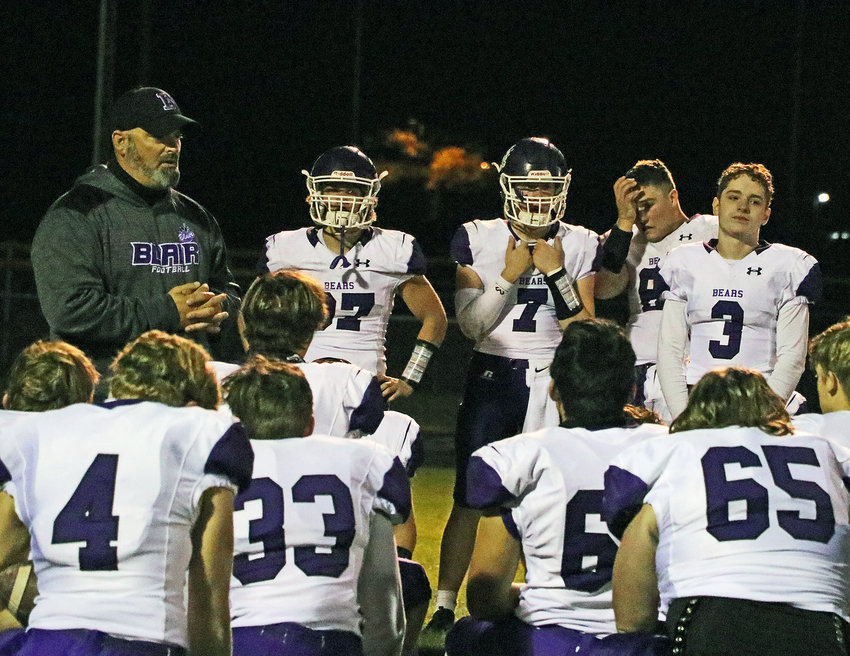 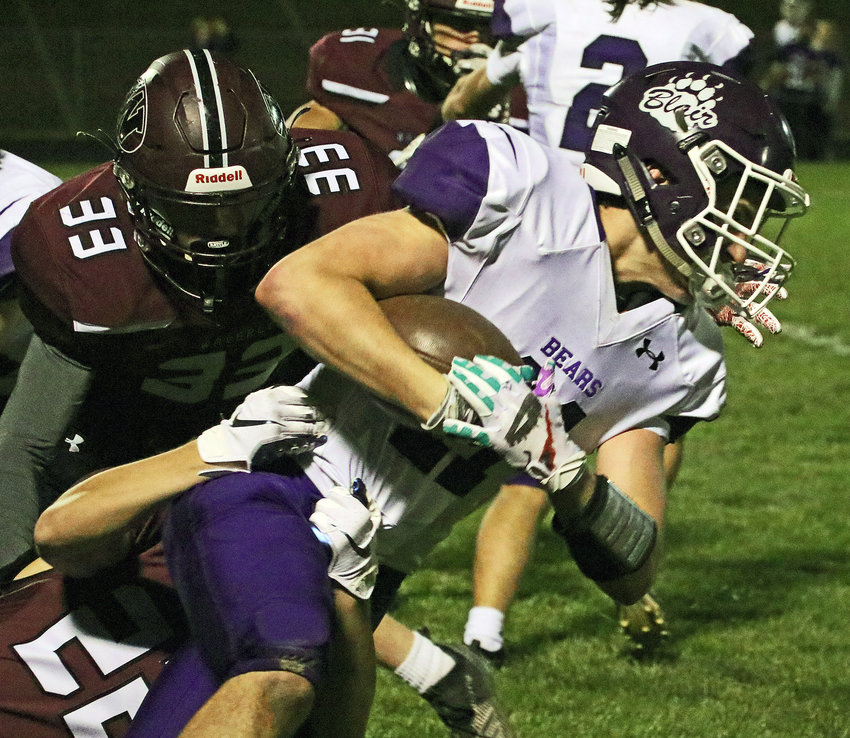 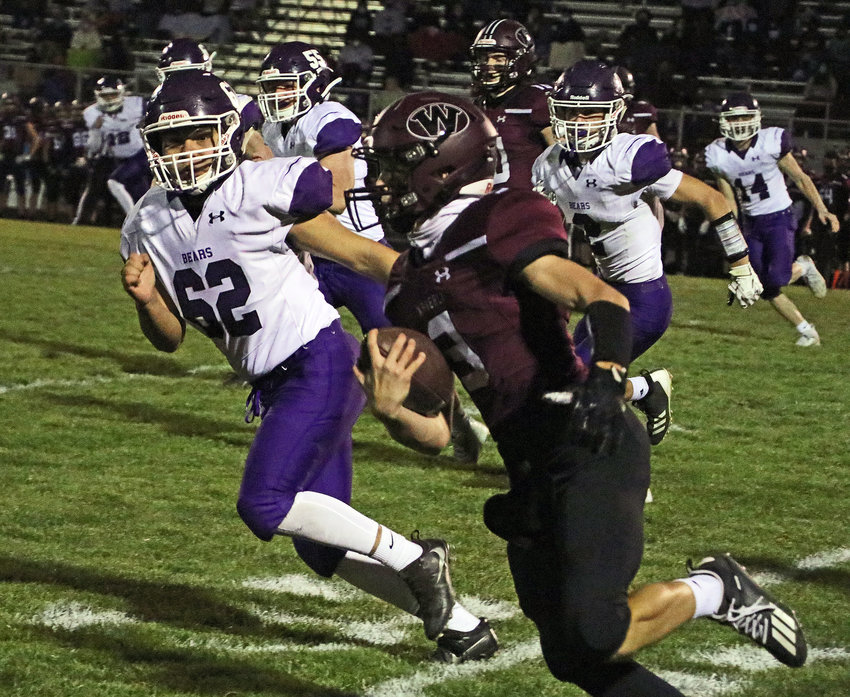 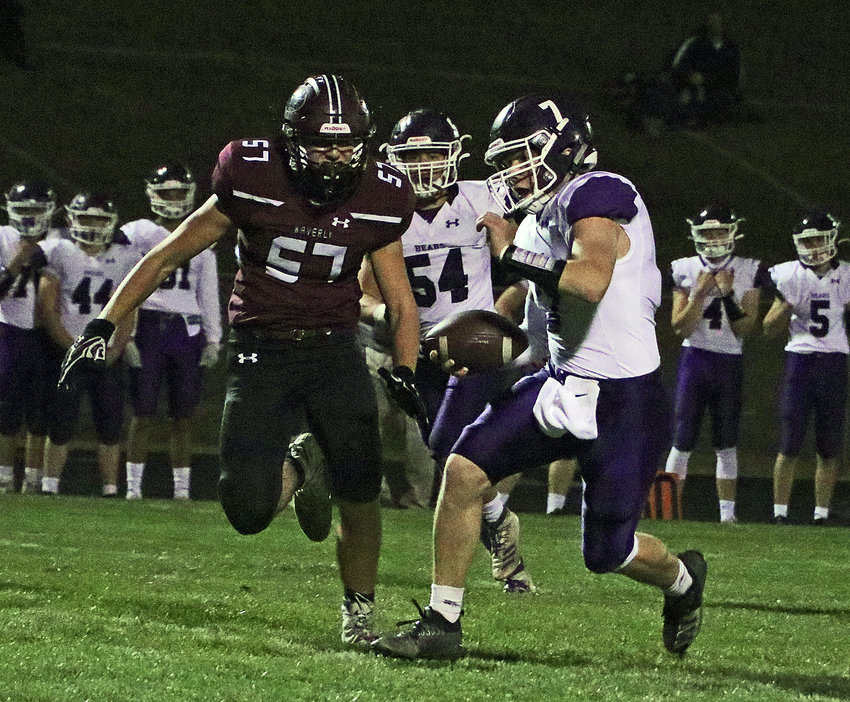 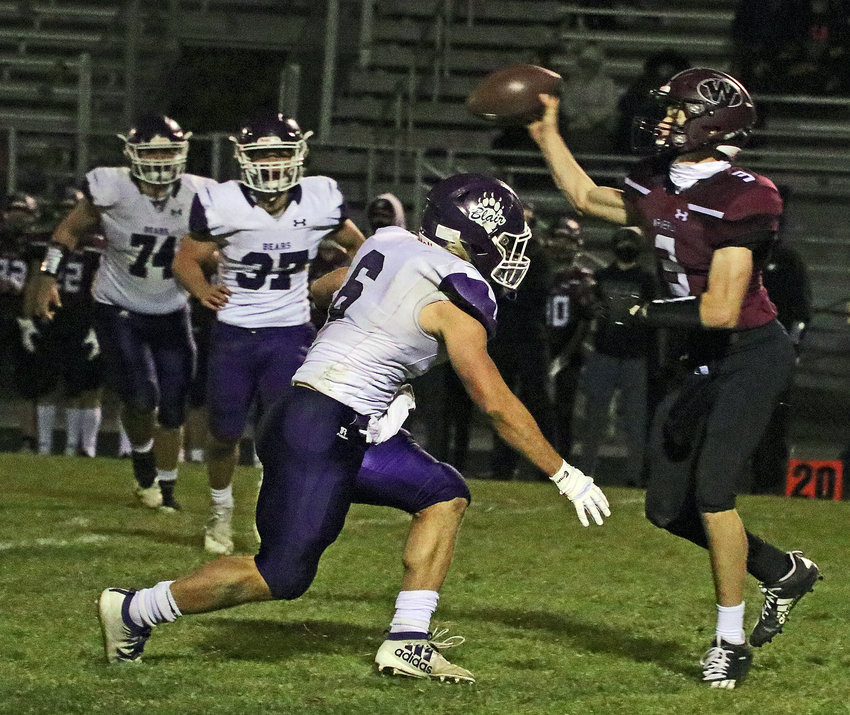 Waverly's vaunted defense bent repeatedly from Blair football force, but it never broke until Friday's fourth quarter.
Down 42-0 on the road during the first round of the Class B playoffs, the Bears' longtime workhorse, Dex Larsen, ripped off a 64-yard run from behind his offensive line. Just a few plays later, the senior barreled into the end zone for his 47th and final career rushing touchdown.
Against the Vikings, though, it was Blair's first and only score on six trips inside the opposition's 25-yard-line. It needed more during the 42-8, season-ending loss.
“When you're playing a good football team like that, you've got to capitalize on your opportunities,” BHS coach Bryan Soukup said. “Unfortunately, we were just unable to capitalize and put points on the board there at times.”
Larsen said the 11th-seeded Bears (6-4 overall) were happy to put points on the board as No. 6 Waverly (8-2) angled for its fifth shutout, but that minimal success wasn't enough to sustain the feeling.
“It was a good way to end my career, I guess,” the senior back said as tears welled up in his eyes. “Just going down fighting with the guys I love playing with.”
Blair proved it could move the ball against the Vikings from its first possession on. It notched its first first down after just two handoffs before, ultimately, punting the ball away to the home team.
The playoff teams traded possessions through the first 6 minutes before Waverly broke the game's first big run. Zane Schawang sprinted 53 yards for a 7-0 lead.
After a strong kick return by freshman Brady Brown to the 42-yard-line, Blair shot itself in the foot for the first time, fumbling the ball away. The Vikings' lead jumped to 14-0 minutes later.
Undeterred, the Bears started their next drive from their own 17 yard-line and chewed up yardage. Quarterback Morgan Rump hit Brown for first-down-worthy pass before Larsen logged the next two as the first quarter ended.
A Livai Opetaia run to start the second set BHS up with a first-and-10 at the Waverly 18. Four plays later, though, the Vikings had the ball back.
“I'll have to watch film to see exactly what we weren't able to do effectively there (inside the 20-yard-line),” Soukup said. “But, yeah, we moved the ball fairly well against them.”
Well enough that the Bears would earn five more opportunities at the end zone from less than 25 yards out. A halfback pass to Rump, multiple medium-length runs by Opetaia, a Conner O'Neil pass reception, another by Cade Ulven and Kip Tupa catches highlighted BHS' offensive effort, but none of the drives they happened on ended in points.
Once Larsen's 64-yard jaunt finally did lead to his score with 5:35 left in fourth quarter, the Bears already trailed by 42. Waverly's Schawang, Cole Murray, Evan Canoyer and Nolan Wiese scored touchdowns.
After he tallied his own, Larsen was met by senior offensive linemen Lance Hume and Cole Truhlsen, and then Rump — another senior — who patted the running back on the helmet. The three jogged off the field to the sideline, but Larsen walked, seemingly soaking it all in.
“I love playing with these guys,” the senior said afterward. “I know we all love playing with each other and that's, kind of, what it's all about. We all had fun together and we all believed in each other. That was the best part about it.”
“I'm proud of the way the kids fought,” Soukup added. “We fought the whole time.”
The coach noted his pride in the senior class in particular. Those 12th-graders led BHS to its fifth-straight playoff berth.
“They will be missed,” Soukup said. “This is a great group, and I'm very proud of each and every one of them for everything they've accomplished within the program.”
Accomplishment came with lasting bonds.
“These are the guys I played with my whole football career, ever since I was in kindergarten,” Larsen said. “I'll never get that back. That's what hurts the most.”
The senior and Soukup were the last two Bears off of the Waverly High School grass Friday night.
“He'll make some college very happy to have him,” Soukup said before Larsen finally reached the chain-link fence and hugged family members waiting for him.