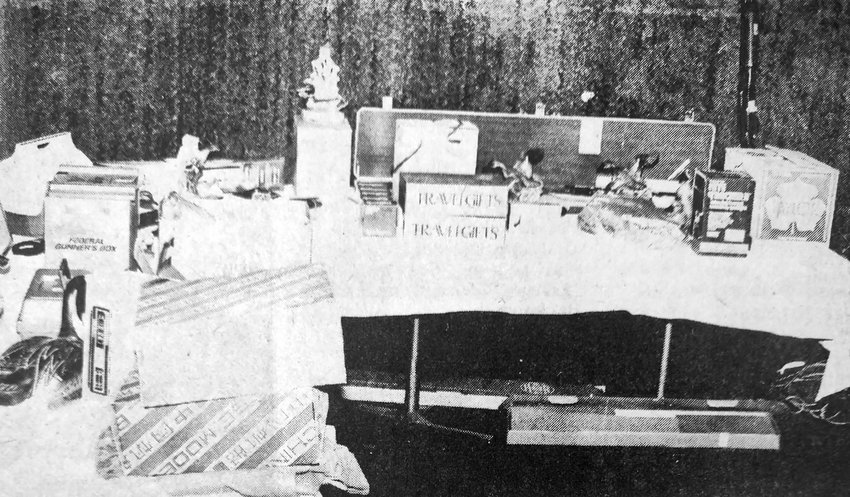 Tables were piled high with door prizes and auction items during a 1981 fundraider for the newly established Washington-Burt County Chapter of Ducks Unlimited.
Enterprise File Photo
Previous Next
Posted Friday, September 30, 2022 5:45 am
By Grant Egger - sports@enterprisepub.com

The brand-new Burt-Washington County Chapter of Ducks Unlimited met for a Charter Nigh Banquet on Sept. 22, 1981, at Cottonwood Marina.
About 200 people were served at the event with 193 as the initial members, according to an Enterprise Media Group report. The organization they attended for is dedicated to the improvement of duck hunting.
Ducks Unlimited (DU) representatives Andy Manes of Fremont and Millard's RJ Ross were present to help with the banquet. Local businesses and residents also lent items for fundraising raffles and an auction.
Overall, $14,500 was raised before expenses with $11,000 to be sent to the national headquarters of DU. Chapter chairman George Rybin said, “It was a 110 percent success.”
The Burt-Washington County Chapter's 1981 treasurer was John Magnuson. The secretary was Reg Wulf, while Jerry Petersen, Monte Wulf, Jeff Rybin, Mark Tighe, Rick Olson, Randy Olson, Dwayne Moffat, Bob Frye and Russ Moseman were also committee members.
Today, the local DU chapter's efforts can be followed along with on Facebook. Its page is online at facebook.com/duburtwashco.
A 42nd annual dinner is set for 5 p.m. Tuesday at the Washington County Fairgrounds.