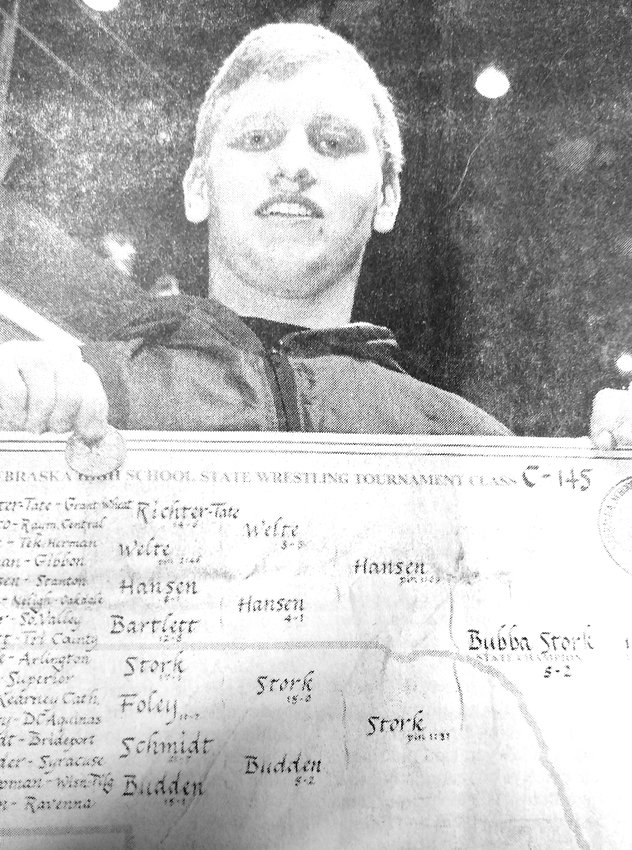 Three-time state wrestling champ Bubba Stork will soon become a hall-of-famer.
The former Arlington Eagle is one of 15 coaches, competitors, contributors and officials who will be inducted into the Nebraska Scholastic Wrestling Coaches Association (NSWCA) Hall of Fame on June 10 in Grand Island. He is the first Arlington wrestler to receive the honor.
Stork was a four-time state qualifier and won state championships in 1995, 1996 and 1997. The Eagle, who ended his prep career as a 145-pounder, remains the school record holder in career nearfalls with 231 and is sixth in career wins. He was 133-16 during his four-year run.
Stork is one of six 2022 NSWCA inductees who'll go in as a wrestler. Zac Dominquez (Omaha Creighton Prep and Nebraska), David Nordhues (Greeley), Kyle Sorensen (Weeping Water), Zach Stalder (Omaha Burke and Nebraska-Omaha) and Chad Wallace (Gordon and Nebraska-Omaha) are the others.
Coaches Ray Maxwell of West Point-Beemer and Dean Davis of Centennial, and officials Dave Shrader, Lynn Senkbeil and Dave Slayer, will be inducted, too. Ken and Ryly Jane Hambleton of the Lincoln Journal Star, Kraig Petersen of Rushville and Chadron State, and John Sutton of Wahoo will be inducted as contributors.
Blair official Ernie Abariotes and Huskermat founder Ross Halford of Blair are past NSWCA inductees.