Signing up for what's next

BHS' Chaffee, Wendt and Villotta to join Division I programs 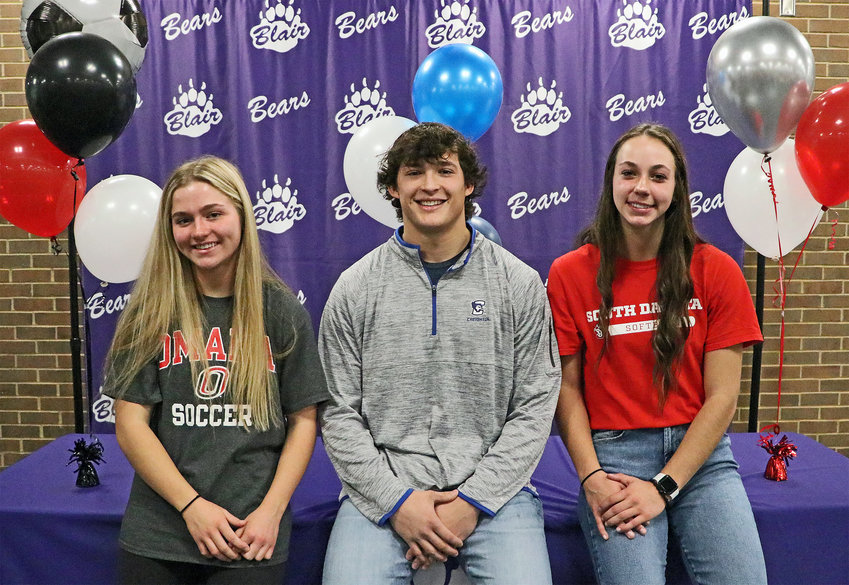 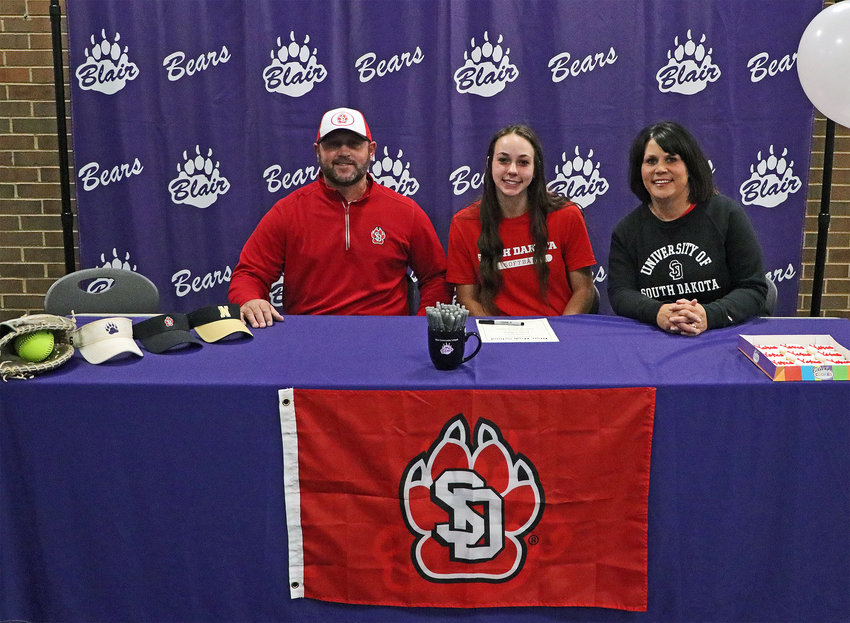 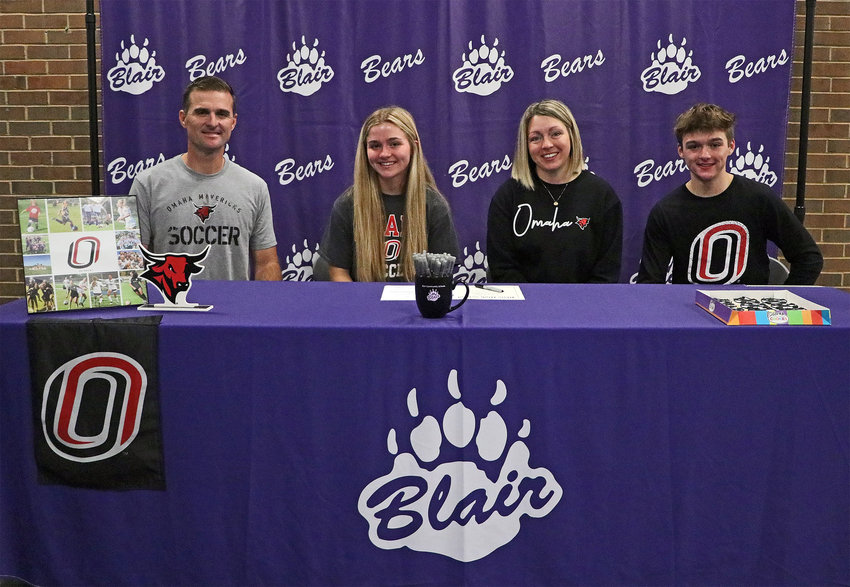 Blair senior Keara Chaffee poses for a photo with her family after signing with the Omaha Mavericks soccer team Wednesday.
Grant Egger 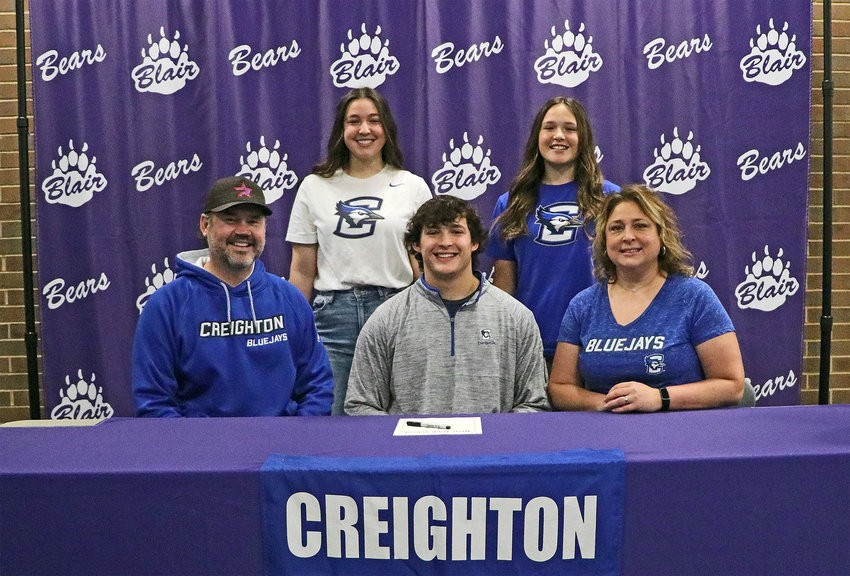 Blair senior Shea Wendt poses for a photo with his family Wednesday after signing with the Creighton Bluejays baseball program.
Grant Egger
Previous Next
Posted Friday, November 11, 2022 7:00 am
By Grant Egger - sports@enterprisepub.com

Parents, classmates and coaches packed a corner of the Blair High School library Wednesday morning as three senior Bears signed letters of intent to play Division I college sports.
Keara Chaffee — a future Omaha Maverick — and Tessa Villotta — a South Dakota Coyote — wore red for the celebration, while Shea Wendt — a Creighton Bluejay — wore blue.
“Seeing all of my softball friends here to support me is amazing,” Villotta said.

Shea Wendt, Creighton baseball
Wendt has long aspired for a future on the diamond.
“Obviously, playing Division I baseball was a dream, for sure,” the Creighton signee said Wednesday. “Now, I'm there and you've got to take it a step further and hopefully shoot for professional someday.”
The Blair Bear and Nebraska Prospects Baseball Club standout committed to the Big East's Bluejays long before his senior school year. The staff, led by head coach Ed Servais, and school left an impression on the slugger.
“The coaches were incredible and super nice,” Wendt said. “I could tell that, in the long run, I'm going to get along with them very well.”
A visit to the Omaha campus cemented his desire to become a CU ballplayer, too.
“We were in awe,” Wendt said. “It took our breath away.”
Last spring, the infielder led BHS in batting average (.414), home runs (six) and RBIs (22). It's his pitching ability, however, that caught the attention of people within the highest level of college baseball.
“Honestly, I think my velocity really got me here,” Wendt said. “That's something I've kind of been blessed with, and I've worked really hard on.”
The right-hander struck out a Blair-best 37 batters across 17 1/3 innings last spring. He said he still needs to work on his control and off-speed pitches, but looks forward to that continued development.
On Wednesday, though, Wendt soaked in the end of a long commitment period followed by his official signing with the Creighton Bluejays.
“I'm just trying to take it all in, for sure,” he said. “Just to live in the moment because it's awesome.”

Keara Chaffee, Omaha soccer
Keara Chaffee's lone Blair High School soccer season ended with a team-best 20 goals in 2021.
The senior starred for the Bears as a sophomore after the canceled 2020 season, but severely injured her knee before postseason play even began. Since, though, she's focused on rehabilitation and club play, and passed the test — celebrating that fact with a University of Nebraska-Omaha signing.
“It's taken a lot of hard work and dedication, but I feel like it's made me a better player,” Chaffee said Wednesday.
The midfielder will join the Omaha Mavericks in early 2023 as she plans to complete her BHS school work next month. She'll join a program on a rise.
Coach Tim Walters' Mavs won a Summit League tournament championship last Saturday at Caniglia Field, topping Oral Roberts on penalty kicks. Next, Omaha faces the top-seeded Notre Dame Fighting Irish this Saturday during the first round of the NCAA Tournament.
“It just makes me more excited to join the program because it's, obviously, going upwards,” Chaffee said.
The Blair senior picked the Mavs before this season's successes, though. Several details factored into her decision.
“The facilities and coaches are really great,” she said. “And the team culture is really great, too.”
As for Chaffee, she's back to solid play in the midfield. The newest Omaha soccer player said her strength is dribbling in space and she hopes to do that in the Mavs' starting lineup sooner rather than later.
“I'm kind of nervous, but I'm mostly excited for a new adventure,” Chaffee said.

Tessa Villotta, South Dakota softball
Villotta is the third Villotta sister to sign-up to play college softball.
BHS grad Tory Villotta signed with Southwest Minnesota State after the 2019 season before Tatum Villotta, an Omaha Marian graduate, joined the South Dakota Coyotes in 2021.
Now, Tessa is set to combine efforts with her second-team All-Summit League sister in Vermillion, S.D.
“It definitely wasn't planned,” the youngest Villotta sister said Wednesday. “Me and Tory, we got to play with each other during high school ball. And, Tory and Tatum got to play with each other all of their childhood.”
Tessa never had the opportunity to play alongside her middle sister, though.
“I'm pretty excited to finally get the chance for a couple of years,” she said.
The Coyotes earned her signature with their program infrastructure, but also their location.
“It's a small town, so it feels like Blair,” Villotta said. “And I never wanted to go far from home.”
It, overall, was the right place for the Bear to compete at the Division I level.
“It's going to be challenging and I'm excited for the competition that we're going to face,” she said. “Everyone's good in college ball.”
Villotta was good for four years at BHS, too, earning multiple Class B All-State honors, including second-team recognition after a sophomore season in which she hit 11 homers. The infielder added six more as a junior before five homers and 37 RBIs this fall as BHS earned third during the NSAA State Championships in Hastings.
Next, the Bears' standout will do what she needs to do to help out her new South Dakota team.
“Plans are to get there and play wherever I'm needed,” Villotta said. “Wherever there's an opening, I'm going to fight for that spot.”