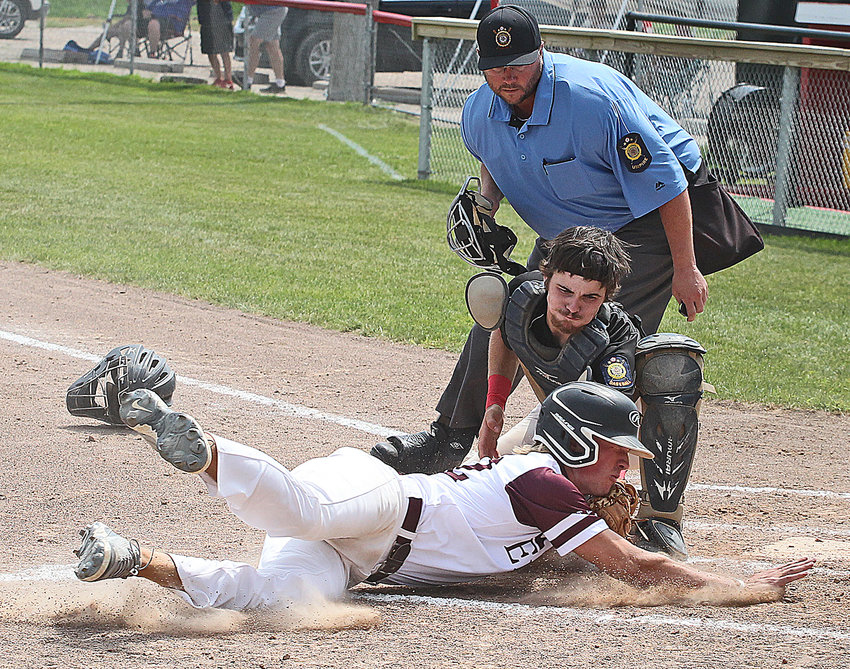 Blair Senior Legion catcher Conner O'Neil tags a Waverly base runner at the plate Tuesday during the Class B state tournament in Broken Bow.
Courtesy of Peter Hammer 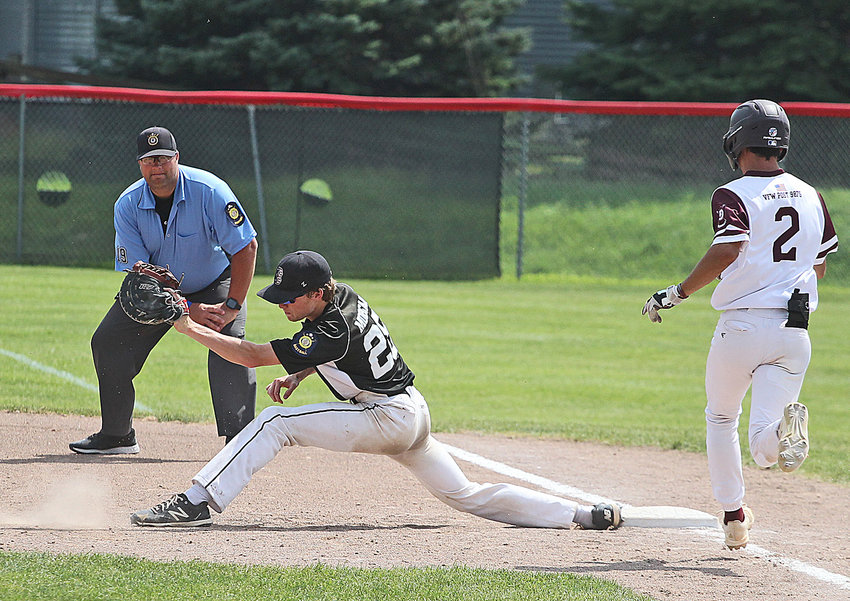 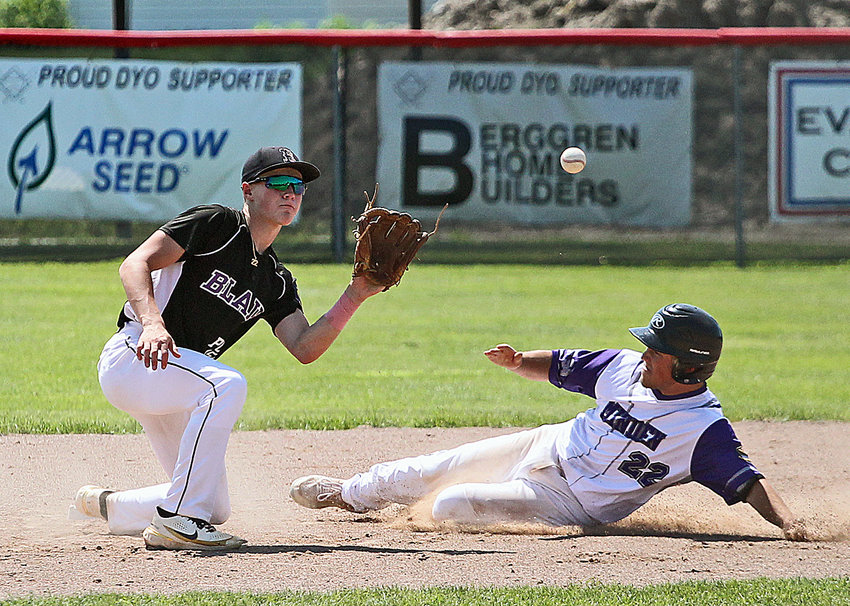 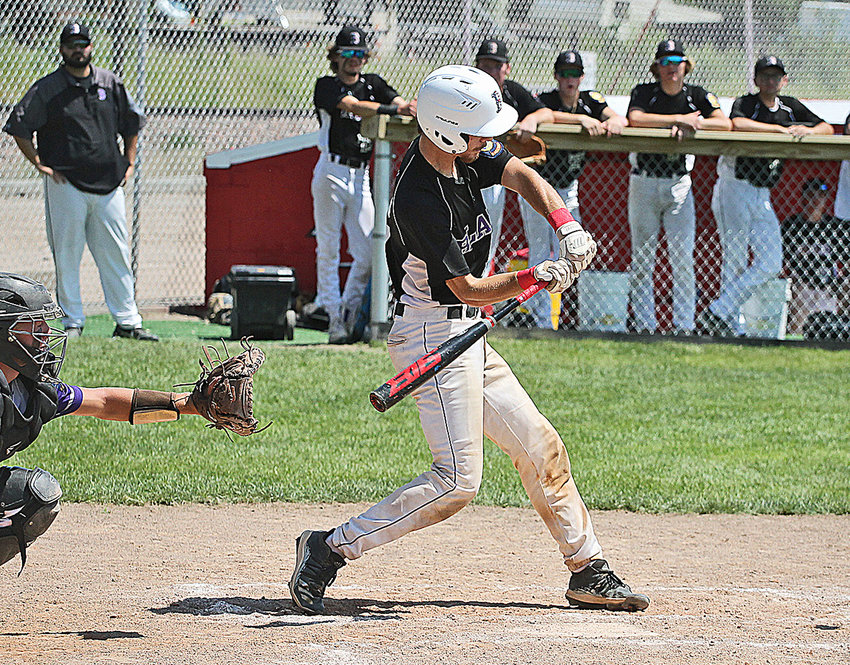 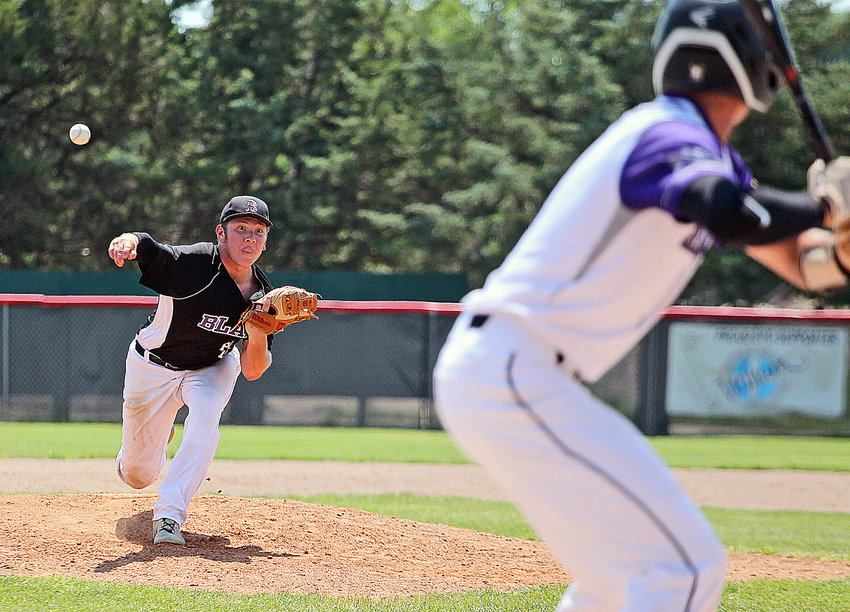 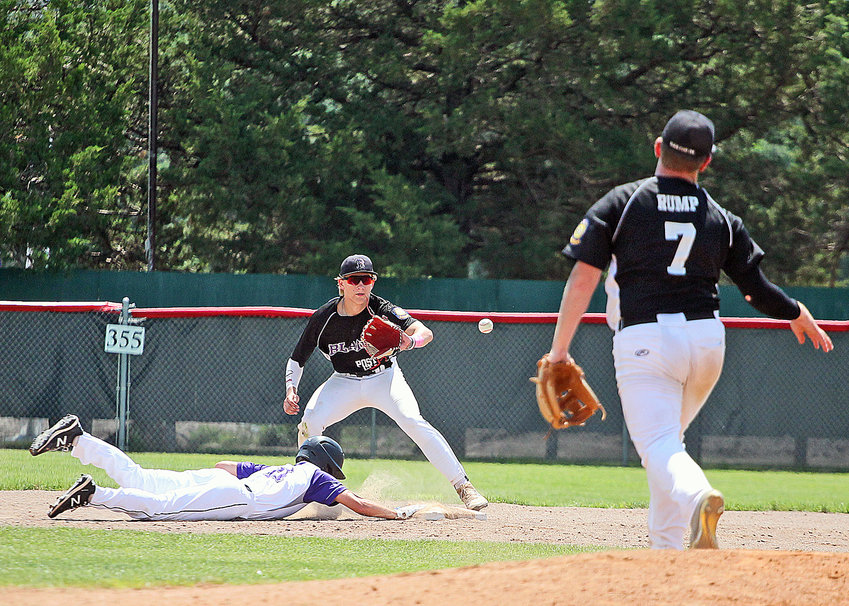 The Blair Senior Legion baseball team started its postseason run July 22 at Vets Field.
The Post 154 Bears were 14-16, losers in two of their last three games before the Area 3 Tournament.
A 10-0 win against Fort Calhoun, however, started a 7-2 postseason tear. Coach James Bilslend's team swept through five district games before a four-day stretch at the state tourney, a run that ended Tuesday with a 7-6 elimination game loss to Waverly.
“To get to where we got to, it was an outstanding year,” the coach said from the Class B tournament in Broken Bow. “I couldn't be any more proud.”
After elimination game victories against Minden and Ogallala on Sunday and Monday, Post 154 jumped out to an early lead in another Tuesday afternoon. Dylan Swanson's two-RBI single during the second frame put the Bears ahead of Waverly, 3-0.
Blair's bats cooled off from there, though, as its opposition scored seven straight runs across the next 4.5 frames. Bilslend said a pitching change altered his players' approach at the plate as they saw a few more first-pitch strikes.
Still, trailing 7-3, Post 154 had one more rally left in their ninth game of the postseason. Tanner Jacobson reached base first during the top of the seventh inning before Lee Chavez-Lara notched a pinch-hit single.
From there, Swanson delivered again. His RBI double cut the Bears' deficit to 7-4 before Morgan Rump's single through the infield chopped it down to just one run.
“We were rolling,” Bilslend said.
A sacrifice bunt later, Blair had the game-tying run on second base with just one out. A fielder's choice and a pop fly later, though, Waverly advanced to the final day of state competition in Broken Bow.
Post 154, meanwhile, ended its season 21-18.
“Just ended up one run short,” Bilslend said.
His team's nine-game postseason stint started with a desire to play well at home for districts.
“We had to defend our home field,” the coach said.
The Area 3 championship turned a ballclub with more losses than wins into a hard out at the state tournament.
“Quite honestly, we were very hard to deal with,” Bilslend said.
He has affection for the Bears who figured it out and put it all together for a memorable postseason run.
“Awesome group of kids,” the coach said. “Community should be proud to have these guys.”

Post 154 earns comeback win
Blair claimed its spot in Tuesday's semifinals with a come-from-behind victory Monday.
Facing elimination against Ogallala, the Bears battled back from an 8-3 deficit to win by three runs, 11-8. They scored eight times across 2.5 innings to do it.
First, Post 154 scored two runs during the bottom of the fourth inning to pull within 8-5. Then, during the fifth frame, Chavez-Lara evened the scored with a one-out, RBI single.
Greyson Kay later notched the go-ahead swing when he plated Swanson with a sac fly in the sixth. Swanson had led off the inning with a double before Rump's bunt moved him to third base.
Now ahead, the Bears' Nate Wachter and Eli Morgan added to their team's advantage before heading into the top of the seventh. Wachter hit a solo homer for Blair's 10th run before Conner O'Neil slid across home plate safe on Morgan's RBI single.
Chavez-Lara stood on the pitching mound for the final inning, striking out the final batter he faced after flyouts to both Ethan Baessler and Kaden Fletcher in the outfield.
Overall, Morgan and Wachter went 3-for-4 at the plate for Post 154. Kay was 2-2.
Pitchers Tyler Andersen, Blaine Rosenbaum and Chavez-Lara combined for eight strikeouts across seven innings.