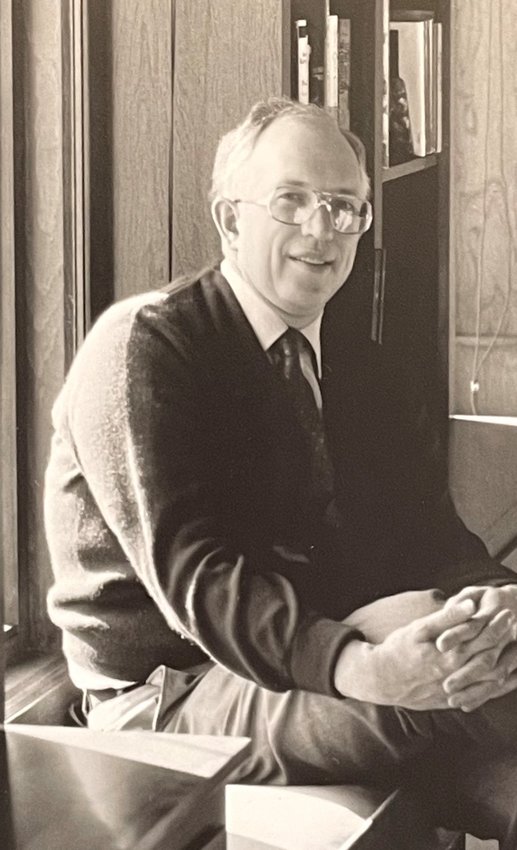 Kenneth Charles Bagby passed away June 21, 2021. Private services will be held. A live stream of the service will be available Saturday at 11 a.m., on Blair First United Methodist Church’s Facebook page.

Kenneth Charles Bagby (Chuck) was born July 14, 1934, in Big Springs, to Georgia (Wilson) and Ken Bagby. The family soon moved to Sidney, where Georgia and Ken ran a Texaco filling station. Chuck had many talents in high school, playing in the band as an accomplished clarinetist. He also played basketball, and was the starting center on the Sidney Maroons football team, where he was co-captain with his friend Jon McWilliams of later UNL Cornhusker fame. They went undefeated his senior year, earning him a spot on the Panhandle-B All-Conference team. In 1952 he was senior class president and Valedictorian. He was very active in the Methodist Church youth group in Sidney, which led him to study ministry at Nebraska Wesleyan University.

After two years in the ministry program at Wesleyan, while playing football, basketball, and clarinet, Chuck discovered his talent in the sciences. While pondering why his theology classes didn’t inspire him, his friend and roommate Robert Jewett, later a noted theologian, helped him see medicine as another way to serve God through helping others. Inspired by one of his science professors, and other pre-med students on campus, Chuck switched his major midway through his studies to pre-med.

Needing to catch up through a Wesleyan introductory biology class, Chuck met Carole Allely, whose older brothers John and Don were football teammates. Chuck and Carole fell in love “over a dead frog,” as Carole puts it. They were engaged on Easter Sunday of 1956. Chuck loved to say “It was also April Fools’ Day, and she said yes anyway.” They married Dec. 18, 1956, in Carole’s hometown Methodist Church in Tekamah. Chuck attended medical school at the University of Nebraska College of Medicine, while Carole pursued her RN nursing degree at Nebraska Methodist Hospital, both in Omaha. They were blessed with their first son David in 1959. Chuck graduated from medical school in 1960.

Dr. Bagby interned at Nebraska Methodist Hospital for a year. The small family moved to Greeley, Colo. in 1961, where he worked with Carole’s uncle, Jim Allely, and her brother Don in their medical practice. That summer the Berlin Wall was built, and he received a draft notice to serve as a doctor. After a short deferral to attend the birth of his 2nd son, Richard, Dr. Bagby was inducted in the Army as a Captain, and reported for duty at Fort Knox. A nine-month deployment in South Korea as Division Surgeon with the 7th Infantry Division Artillery followed in 1962, where he also volunteered at an orphanage. During that time, Carole moved back to Tekamah to receive help from her parents in caring for the two boys.

After his focus on preventive medicine and field sanitation in Korea, Dr. Bagby sought a short-term medical residency in Omaha to refresh his skills in patient care. In 1964 the Blair Clinic welcomed him with open arms and strong need for a new doctor! The Bagbys fell in love with the community in Blair, and Dr. Bagby officially joined the Blair Clinic Building Corporation. The family welcomed the birth of Jeff in 1967, and Kathleen in 1970.

Dr. Bagby and Carole continued their devotion to their faith and to community service by joining the First United Methodist Church, the Lions Club, and other community organizations. He served in turn as Medical Director at Memorial Community Hospital (MCH), where he attended at over 2,000 births, including “13 and one-half sets of twins.” In later years as President of the Blair MCH Foundation, he helped fundraise and make decisions at a critical time.

Doc and Carole worked tirelessly for the Black Elk-Neihardt Park Board, serving at times as President, Secretary, and Treasurer; and with many friends, they were instrumental in building the Tower of the Four Winds, and again 30 years later in restoring and renewing the mosaic, and creating a permanent maintenance fund. In 1999, Doc and Carole received the Dana College Community Service Award, and in 2000 the Blair Area Chamber of Commerce Community Service Award. Numerous other community projects and recognitions exemplified not only their love of service, but their devotion to the people and Blair’s unique charm. After retiring from the Blair Clinic in 2001, Doc worked part-time for MCHHS at the Fort Calhoun clinic for a while. He and Carole enjoyed retirement greatly, building the Healing Garden Railroad at MCH, and traveling and playing with their grandchildren and great-grandchild.

Doc suffered a stroke in March of 2021, which affected his body, but not his mind and spirit. Since then, he was visited by all 4 of his children, family members and friends, which brought him great comfort as his body declined. He passed into Heaven on June 21, 2021.

He is survived by his wife Carole (Allely); son David of Lincoln; son Richard of Lincoln and his family, grandson Brandon Mullen-Bagby and his wife Melissa Lee, and great-granddaughter Ruby Lee of Silverton, Ore.; and granddaughter Kerstin Mullen-Bagby of Lincoln; son Jeff and his wife Melanie of Cloverdale, Calif.; and daughter Kathleen Coate and her husband Paul, and grandchildren Genevieve and TJ Coate of Bloomington, Minn.

If you haven’t heard Doc’s stories, you must not have ever spent more than five minutes at a time with him. Check out his book at the Blair Library, “Nuggets from the Golden Age of Medicine: No Relationship to Money”.

To honor Doc’s devotion to the health of the Blair community, get your shots, and bring a friend. Post a picture with #shots4doc to share your for vaccine locations, call the Blair Clinic at 402-426-4611; check your local pharmacy, or text your ZIP code to 438829, or call 1-800-232-0233. Other memorials to: Blair First United Methodist Church Foundation, Blair Memorial Community Hospital Foundation, Washington County Community Foundation; consider directing it to Black Elk-Neihardt Park.

Private family services will be held.