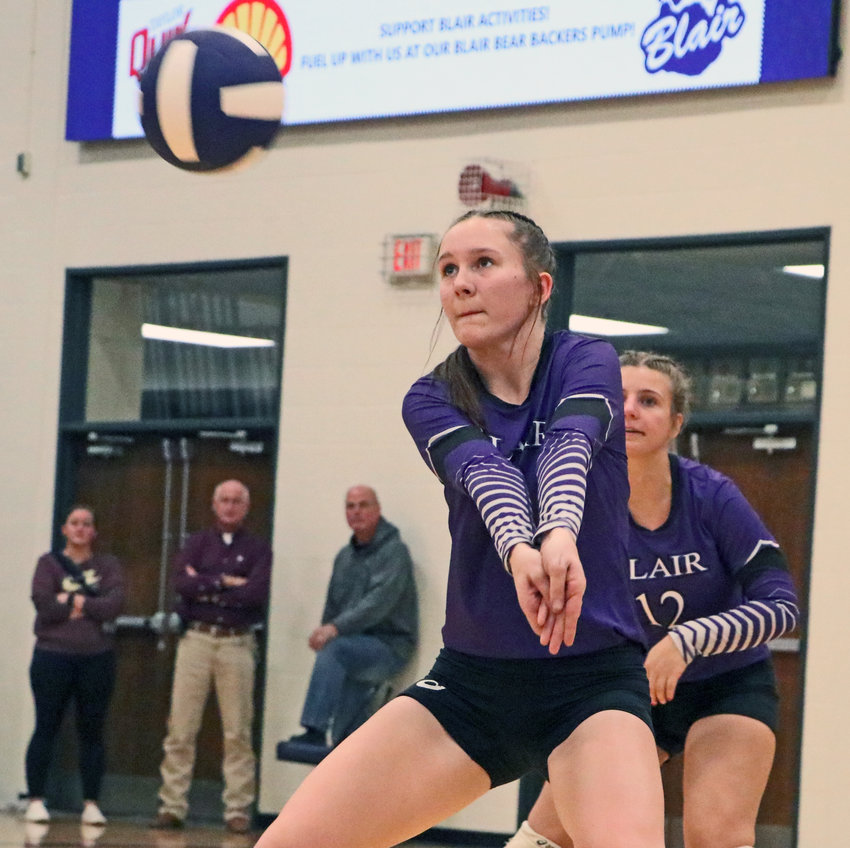 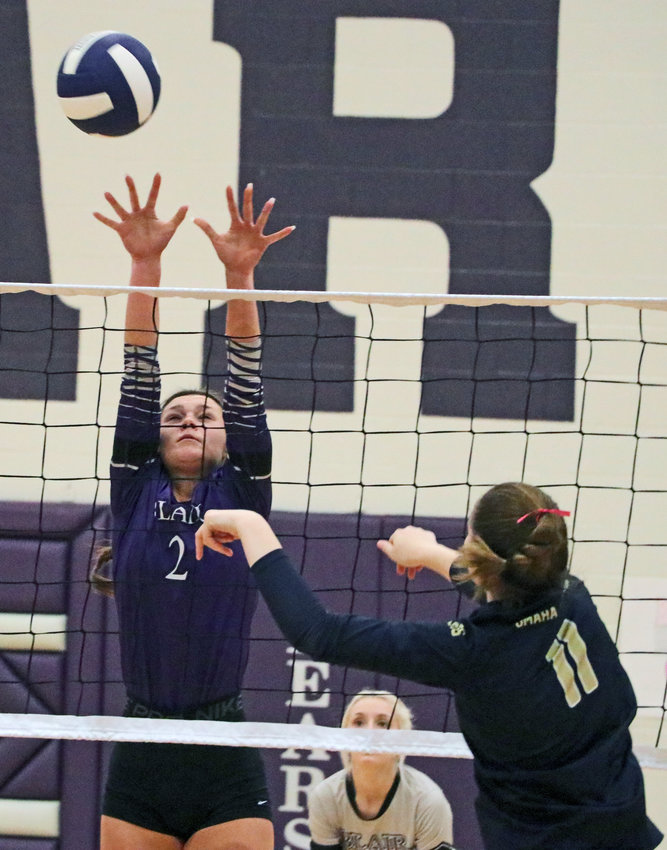 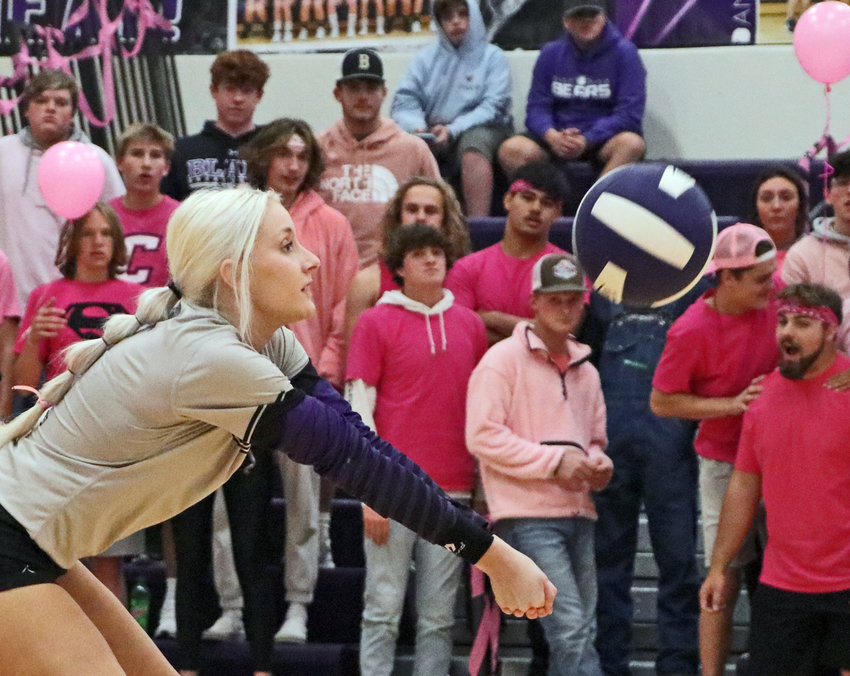 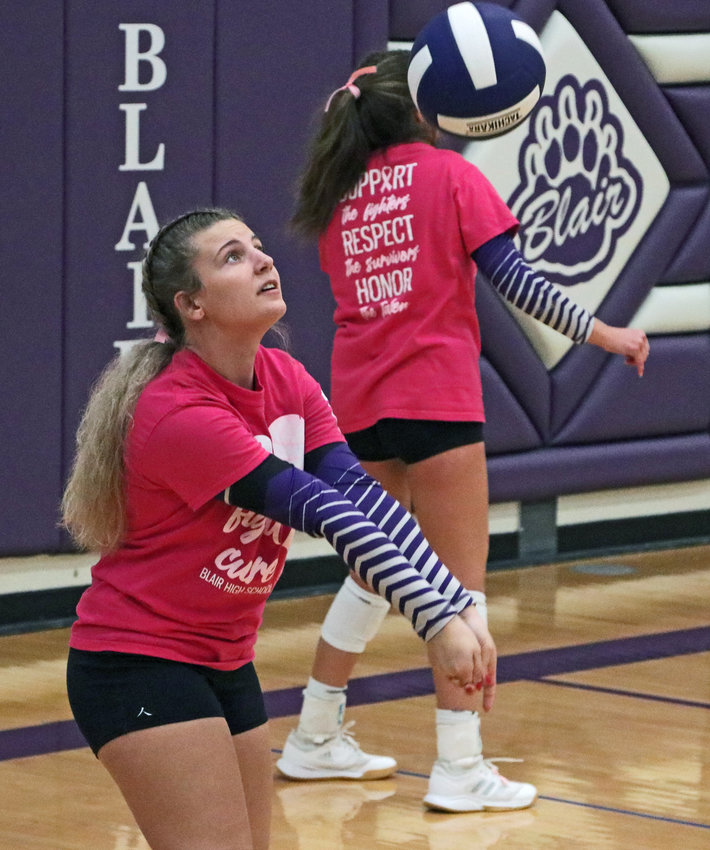 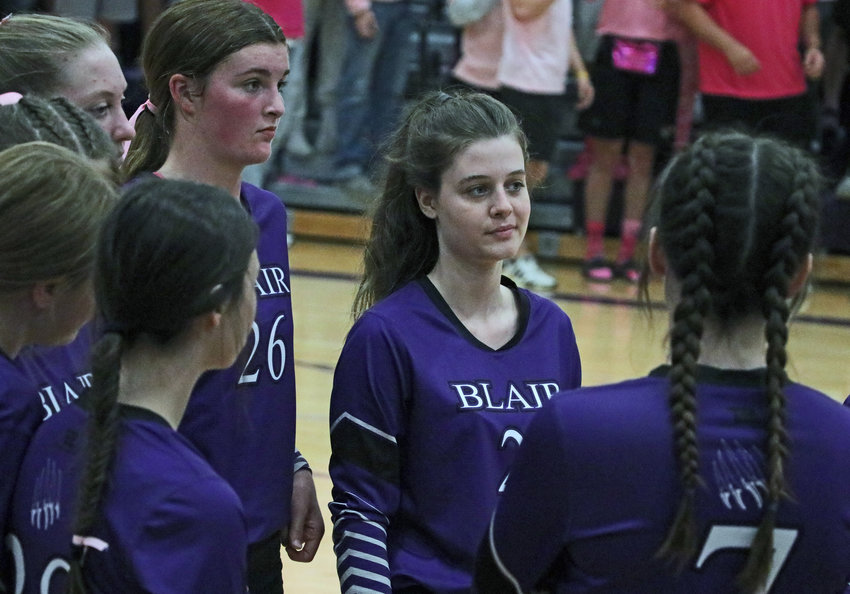 Olivia Fitchhorn supplied the final spike on Senior Night.
The Blair High School volleyball player hit the ball to the back line Thursday against Omaha Christian Academy (OCA), ending her final regular season home match in four sets, 3-1.
Line judge Linda Harman, an Otte Blair Middle School teacher, took an extra half-second to signal that match point had, in fact, been scored and it made Fitchhorn sweat.
“I was really worried for a second,” she said with a smile. “But it was definitely one of my better hits. I could feel it as soon as I hit it.”
The swing ended the 25-20, 18-25, 25-18, 25-22 match in the Bears' favor. Coach Becca Mellema's team improved to 10-15 with its 10th win, the most the BHS volleyball program has tallied in a season since it went 10-20 in 2013.
OCA, meanwhile, fell to 24-3 in defeat. The Class C2 team had only lost to Douglas County West (21-8 overall) and Mead (25-3) previously.
“We kept our positivity up and were ready for whatever was coming our way,” Blair's Ashlyn Just said, clarifying. “Worked hard to keep the positivity up.”
That attitude led to a positive result for the Bears' senior class — Fitchhorn, Megan McKeon, Claire Gochanour, Brenda Dalcin and Just. It all started when Fitchhorn broke a 16-16 tie during the first set. Her attack, and late kills by sophomore Peyton Ogle and freshman Taylor Mostek, helped the home team to 1-0 advantage.
OCA won the second set, but BHS responded by claiming the next two. First, a McKeon ace pushed the Bears' lead to 12-5 during the third. Gochanour added a flat-footed kill through a block to push that advantage to eight before an out of bounds hit by the visiting team ended it.
Blair kills by Ellia Klanderud, Gochanour and Schuyler Roewert — and assists by setters Reece Ewoldt and Abigail Schlachter — led to set point, too.
“I was just so happy,” Just said after the match. “It was a good time to be out there with everyone.”
The good time concluded with Fitchhorn's final regular season kill, which ended the fourth set at 25-22.
The Bears next compete tonight in Class B4 Subdistrict Tournament play. BHS hosts with Schuyler and South Sioux City competing at 5:30 p.m. for a chance to play Mellema's team in the final.
If Blair wins its postseason match, it'll have 11 victories for the season — the most for the volleyball program since the 2002 squad went 15-9.

Pioneers drop 2 at Wisner triangular
The Fort Calhoun volleyball team closed its regular season schedule Thursday at a Wisner-Pilger triangular.
The Pioneers (4-25 overall) lost back-to-back 2-0 matches to the host Gators and Logan View/Scribner-Snyder. FCHS started behind Class C2 No. 2 Wisner, 3-0, before Olivia Quinlan set the ball over and it fell for the Pioneers' first point. Their second didn't come until 11-2 when the Gators hit a serve into the net.
FCHS lost the first 25-10 before also dropping the second to its host, 25-5.
Coach Sarah Rangel's team was more competitive against Raiders, dropping the first set just 26-24. It then lost the second 25-5 before returning home.
The Pioneers were set to start Class C1-6 Subdistrict play Monday at North Bend Central. Updates can be found online at enterprisepub.com/sports today before full coverage appears in Friday's Washington County Enterprise.