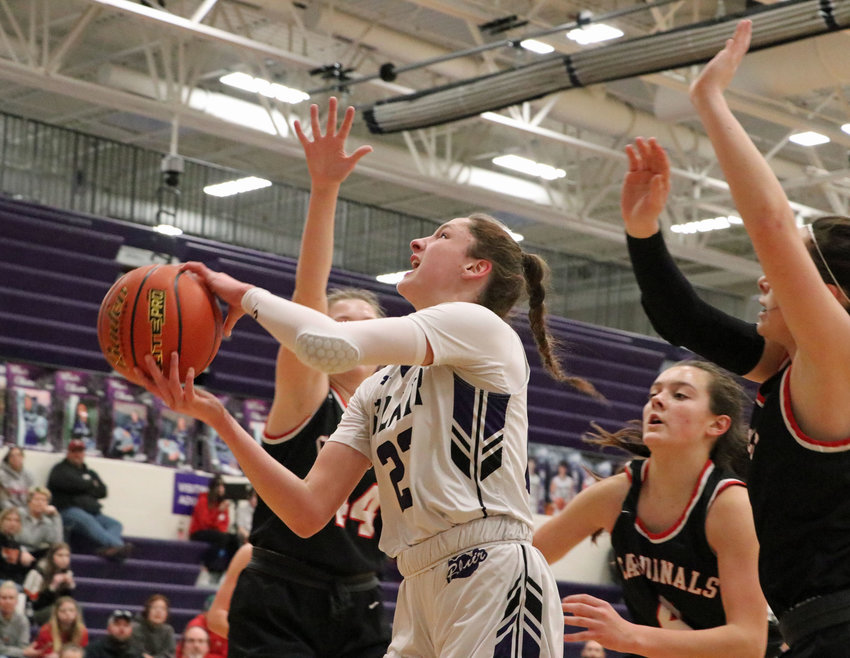 Bears freshman Addie Sullivan, middle, drives to the basket against South Sioux City on Wednesday during the Class B Subdistrict 4 Tournament final at Blair High School. The Bears beat the Cardinals and are just one more win away from earning a state tourney spot.
Grant Egger
Posted Thursday, February 24, 2022 12:23 am
Staff reports

The Blair boys basketball team will play at McCook on Saturday in the Nos. 7-10 District Finals matchup. The game starts at 2 p.m.

Both the Blair boys and girls basketball teams were victorious Wednesday night, clinching their subdistrict tournament titles.
Coach Matt Aschoff's girls (17-6 overall) defeated South Sioux City 38-26 at home in the Class B Subdistrict 4 final, while coach Chris Whitwer's boys (14-9) won a 78-74 overtime game at Class B No. 4 Bennington in the B-5 Subdistrict finale.
The wins solidified the Bears' District Finals seeds. The girls are No. 9 and will play at No. 8 Sidney (19-7) for a chance to return to the state tournament for the first time since 1998.
The Blair boys, meanwhile, are the No. 10 seed and will travel to McCook (20-6) in hopes of returning to the Class B State Championship tournament for the second-consecutive year.
District final dates and times weren't made official as of late Wednesday night. Weekend games are expected, though they could also be scheduled for early next week. This online article will be updated with the information when it becomes available.

For up-to-date postseason basketball updates, continue to check back here at enterprisepub.com/sports each night as results go final. Full stories and additional photos will appear in future editions of the Washington County Enterprise and Pilot-Tribune.