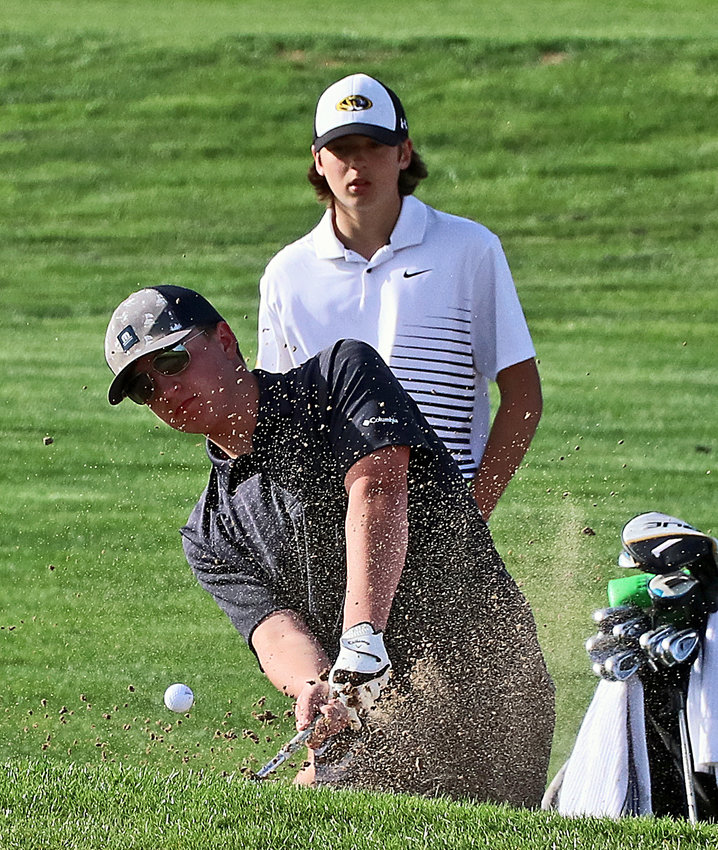 Blair Bear Landen Oppliger chips out of the bunker on hole No. 9 Monday at River Wilds Golf Club.
Grant Egger
Posted Friday, May 13, 2022 6:15 am
By Grant Egger - sports@enterprisepub.com

With about a week to go before the district tournament, Blair golf coach Ross Udey hadn't finalized his varsity lineup.
One he knows for sure will play next Tuesday at Wayne Country Club, though, is Easton Chaffee.
“He's got to do this right here,” Udey said Monday at River Wilds Golf Club, gesturing to Chaffee as he walked by. The Bears' low scorer was carrying a bucket of balls after playing nine during BHS' quadrangular with Bennington, Elkhorn and Fremont.
“He's headed to the range to hit some balls because he didn't hit it very well tonight,” Udey said. “That's what he's got to do.”
Even so, Chaffee shot his team's low score over nine holes. He carded 44 strokes, while the Bears finished fourth with 197. Fremont won with 162 swings to the Badgers' 172.
BHS' Landen Oppliger, meanwhile, shot a 49 to go with Tyler Lantry's 50.
“Landen and Tyler have been playing pretty consistent,” Udey commented.
Connor Wayman added 56 for the Bears, too, and Nicky Rothlisberger carded a 65.
On the junior varsity side, Blair's Degan Dresden took 52 swings. Xander Miller added 60, Markus Popa had 62 and Luke Valasek took 65. Tyler Wolsmann shot a 67 as well.
Then, on Tuesday, the Bears played Crooked Creek Golf Club in Lincoln. They finished 12th out 18 teams during the Waverly Invite, taking 397 swings.
Chaffee carded 88 strokes, finishing 19th, while Luke Ladwig's 97 was good for 44th. Adam Grote finished with 100 swings, while Oppliger had 112 and Kalvin Lorenzen shot a 128.
The Bears were scheduled to play on both Wednesday and Thursday, but now look forward to the Class B District 2 Tournament at Wayne Country Club next Tuesday.

Eagles take 179 swings in quad
The Arlington boys golf team earned third Monday during a quadrangular on its home course.
The Eagles finished with 183 strokes over nine holes at Fremont Golf Club, while Fremont Bergan and Yutan took 179 swings apiece. David City had 217, too.
“It was a decent day, but the guys felt like they left too many strokes on the course,” AHS coach Scott Parson said. “Little mistakes or miss hits that led to tougher holes.”
The coach could live with the result.
“It's ok,” he said. “They need to get these things out of the system to prepare for next Monday when we play districts at the same course.”
The Class C District 2 Tournament is Monday back in Fremont.
Last Monday, though, Arlington's Josh Hamre and Jacob Meehan shot identical 44s to tie for third during the quadrangular. Eddie Rosenthal finished with 45 swings, too, while Frankie Rosenbalm shot a 50 and Stokely Lewis had 58.
Lucas O'Daniel led the Eagles' junior varsity lineup with 63 strokes over nine holes. Trinton McDuffee shot a 65, Ethan McGee carded 66 swings and Dustin Kirk had 73. Joe Burns took 82 attempts, too.