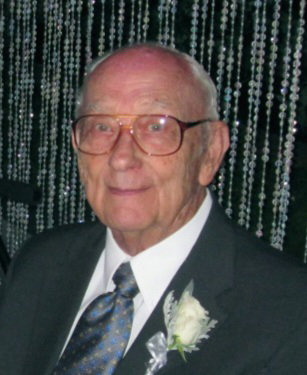 On June 23, 2022, 98-year-old WWII veteran, Harry Howard Wagner of Kerrville,
Texas peacefully left our lives and was reunited with his beloved wife, Gloria. Harry was born in Hooper on April 11, 1924, the first son of Monroe Harry and Luella (Larson) Wagner. He was baptized and confirmed at Grace Lutheran Church in Hooper. Harry and his younger brother, Duane enjoyed spending time on the Larson family farm riding horses and helping with chores. With their Wagner grandparents living next door, many days were spent playing with their cousins. After starting school in Hooper, Harry attended Oakland High School during his senior year. He was class treasurer and on the yearbook staff, graduating in 1941. Shortly after graduation, Harry was drafted by the Army.

He was assigned to the First Division (The Big Red One), Company C, 26th Infantry. After completing his training at Fort Meade, Maryland, he was deployed to Europe. Landing on Normandy Beach three weeks after D-Day, the 26th Infantry marched through France and Belgium to Germany. It was in Germany that 20-year-old Harry was wounded by German shrapnel. He spent the next seven months in Paris, England, and Seattle hospitals as he healed from these wounds. He received the Purple Heart, Bronze Star, Good Conduct Medal, Combat Infantry Medal and the European-African Middle Eastern Campaign Medal. It was his honor and privilege to donate his Army uniform to the Remember Museum 39-45 located in Thimister- Clermont, Belgium.

Returning to Nebraska, he began studies at the University of Nebraska in Lincoln.
He joined the Sigma Phi Epsilon Fraternity and become the Comptroller for his fraternity. It was in Lincoln that Harry met a young lady named Gloria Axelson who would later become his future wife.

Shortly after graduating in 1949 with a B.A. in Business Administration, Harry and Gloria were married on June 10, 1950 and recently celebrated their 70th wedding anniversary in Kerrville.  In 1952, Harry was offered a job at Shell Oil as a computer programmer. They then moved to Midland, Texas where they raised their two daughters, Anita and Amy until Harry was transferred to Houston in 1963.

As a Staff Systems Analyst, the job at Shell required Harry to travel and the family spent summers in both Los Angeles and New Orleans.  Family vacations included driving trips to Alaska, Yellowstone Park, the Great Smokey Mountains, Washington D.C. and Nebraska to visit relatives. Canada was always a favorite destination as they attended Expo ‘67 in Montreal and Klondike Days in Edmonton in 1972. As Harry was a WWII veteran, he and Gloria also enjoyed taking numerous trips abroad participating in many D-Day commemorative ceremonies. Retiring from Shell Oil in 1986, they moved to the Kerrville area where they spent the rest of their years.

His many hobbies included genealogy, creating websites, learning to speak German, working in his yard, traveling, and most importantly getting to spend time with family and friends. Harry and Gloria enjoyed sharing the beauty of the Texas Hill Country with all who came to visit.

He was preceded in death by his wife, Gloria Joan Wagner; his parents, Monroe Harry and Luella Wagner; his brother, Duane Wagner and wife, Darlene; his sister-in-law, Charis Nelson and her husband, Lester.

He leaves behind many who mourn his loss including his daughters, Anita Yarbrough and her husband, Phillip (Tomball, Texas); Amy Wagner and her husband, Frank Cummings (Tetonia, Idaho); his grandchildren, Dana and her husband, Matt Danna (Houston, Texas); Drew Yarbrough (Kerrville); Anna and her husband, Trey Solis (Tomball); Alyssa Yarbrough and her fiancé, Eniola Kazzim (Katy, Texas); Edward Cummings (Bakersfield, Calif.); John Cummings (San Antonio, Texas) and Harrison Cummings (Dover, Del.).   Harry had seven great grandchildren who were all the joys of his life:  Monroe Lynn (9), Pearson Soul (7) and Hayes Matthew Danna (5); Arden Mae (5) and Judson Wayne Solis (4); Kaiden Dimeji (8) and Korbin Femi Yarbrough-Kazzim (3).  Harry was excited to learn that there would be another Solis great grandchild arriving this coming January. He lovingly leaves behind several nieces and
nephews and their families all residing in Nebraska:  Randy Nelson, Marshall Nelson (Linda), Leslie Janke (Mark), Mary Ahrens (John) and Sara Anderson (Cal). Also mourning his loss are many friends and relatives.

The family would like to thank the wonderful staff and doctors at Audie Murphy V.A. Medical
Center in San Antonio, Sid Peterson Regional Medical Center in Kerrville and Alamo Hospice for their loving care of Harry.

A private memorial service is planned for his family and close friends. In lieu of
flowers or plants, please send any memorials thanking Harry for his military service or honoring his memory to Audie Murphy V.A. Medical Center in San Antonio, Texas. He was an amazing person who will be missed by many, leaving us with special memories to keep in our hearts forever.

Funeral arrangements are under the care of Wright’s Funeral Parlor, Kerrville.