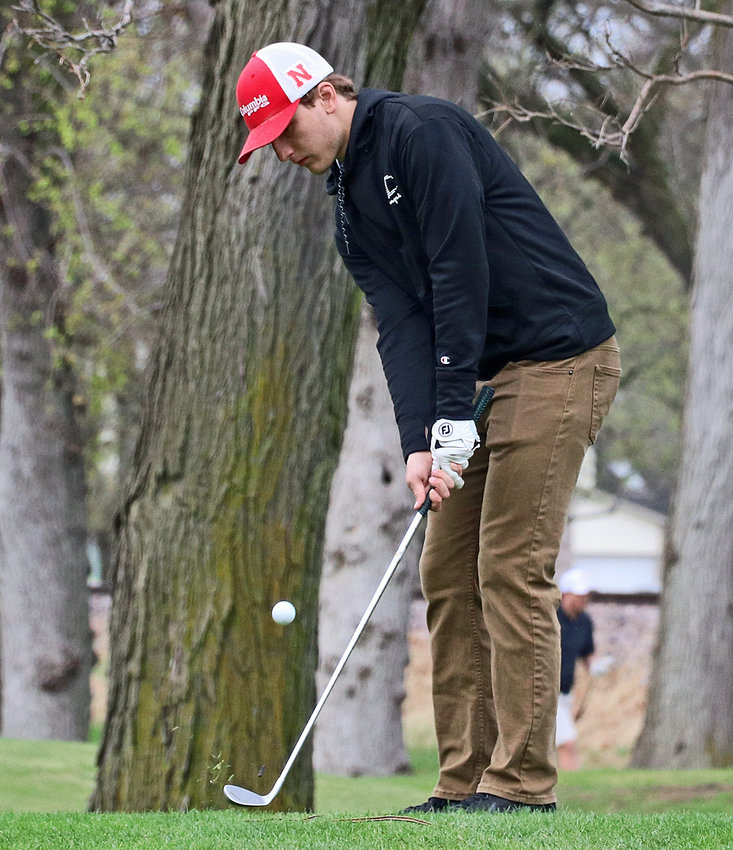 Arlington senior Frankie Rosenbalm chips from the fringe onto the green Friday during the Eagles' home invite at Fremont Golf Club.
Grant Egger 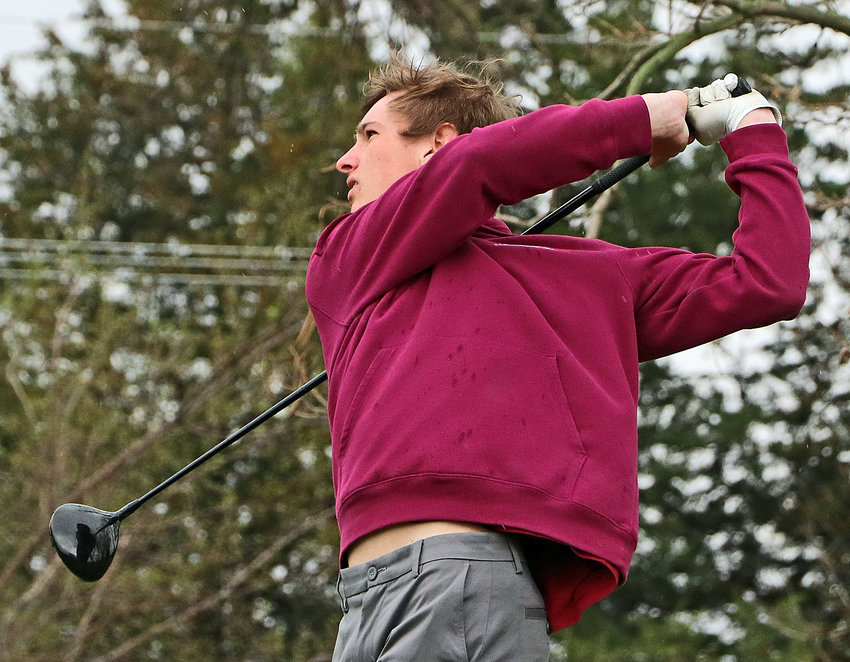 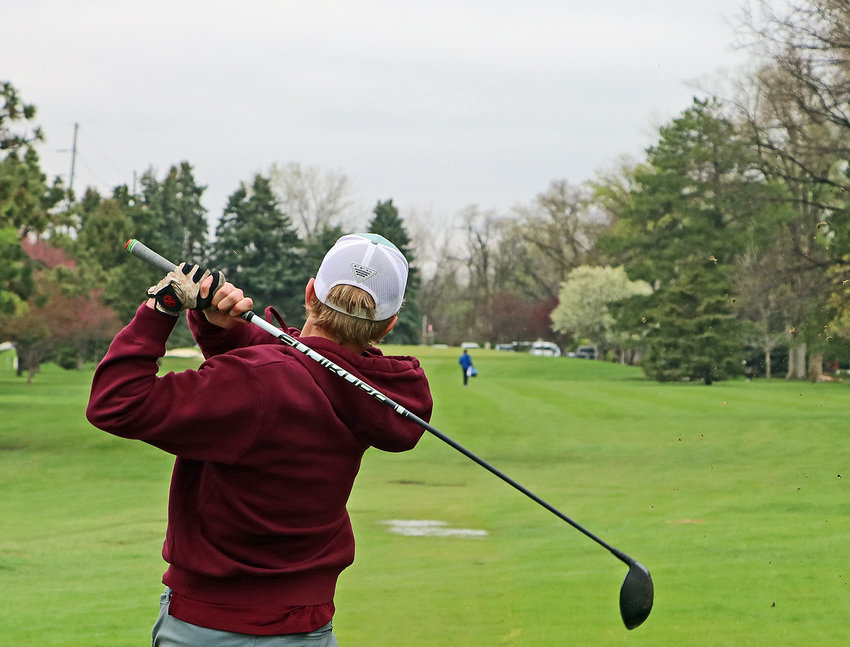 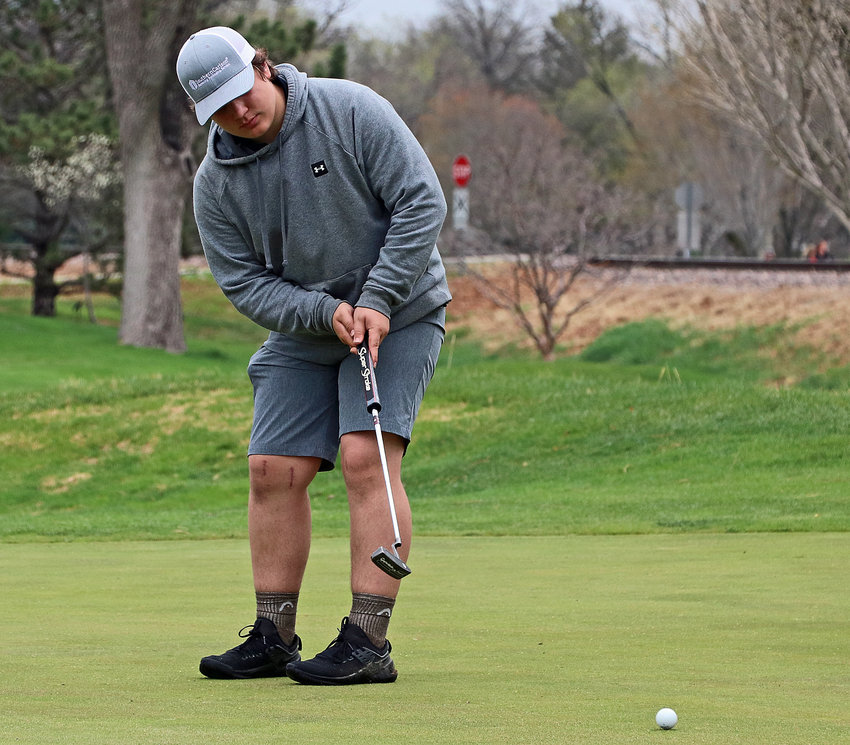 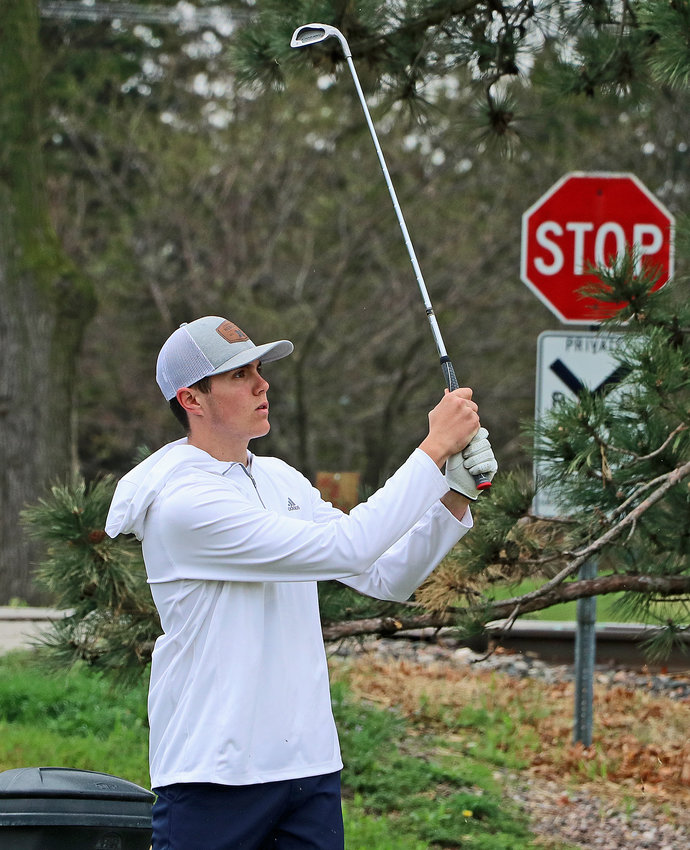 Eddie Rosenthal was sharp from the start Friday during the Arlington Invite at Fremont Golf Club.
The Eagle hit his tee shot straight down the fairway on hole No. 1, placed the ball feet from the cup on his second swing and narrowly missed a birdie putt that just rimmed out.
The junior finally sank his birdie on No. 16, finishing 18 holes with just 78 strokes. He was third overall — just four swings behind medalist Jake Richmond of Yutan — as coach Scott Parson's Eagles also claimed third in the team standings. They finished with 356 strokes, while Fremont Bergan took 335.
Rosenthal shot par on nine holes, while Jacob Meehan did on four. The latter AHS golfer finished with 90 swings, tying for 16th.
Arlington's Frankie Rosenbalm and Josh Hamre, meanwhile, took 94 swings apiece Friday. Rosenbalm shot par on five holes, while Hamre did on four.
Stokely Lewis carded 120 strokes, too.
Before hosting their home tournament, though, the Eagles played 18 holes at the North Bend Invite. They finished sixth out of 13 teams April 27 with 343 swings.
“We had a great weather day that also turned into a great golf day,” coach Parson said. “Our golfers had the occasional rough hole, but, overall, more good things happened across the course.”
Rosenthal finished sixth with 78 strokes, taking 39 apiece on both the front and back nine holes. He finished No. 3 in just two swings.
Rosenbalm, meanwhile, shot an 83 and Meehan had a 88. Hamre took 94 swings and Stokely Lewis had 107, too.
Arlington next competes Thursday during the Nebraska Capitol Conference Tournament at River Wilds Golf Club. Teams tee off at 9 a.m.

Pioneers play in North Bend, Oakland
The Fort Calhoun golf team recently competed on courses in North Bend and Oakland.
First up, North Bend Golf Club on April 27.
“Lowest score of the year,” Pioneers coach Dustin Humphrey said.
FCHS finished 10th out of 13 teams with 368 strokes. Landon Miller and Tyler Eastman shot their season-best scores.
Miller finished with 85 swings over 18 holes, taking just 41 from Nos. 1-9. He was seven-strokes better than teammate Owen Newbold, who shot a 92, while Eastman shot a 94.
Dylan Boldt added 97 strokes to the Calhoun team score and Owen Miller had 102.
Then, on Saturday, the Pioneers took 387 swings at Oakland Golf Club.
“Weather was good to start with,” Humphrey said. “But became quite abrasive in the afternoon.”
Landon Miller led FCHS with a 92 over 18 holes, while Newbold carded 96 strokes. Eastman took 98, Boldt had 101 and Owen Miller shot a 107.
The Pioneers will next compete in the NCC Tournament on Thursday at River Wilds Golf Club. Golfers take their first swings at 9 a.m.

BHS varsity shoots low score
Like Fort Calhoun, the Blair golf team competed in North Bend and Oakland last week.
One difference, however, was a Thursday trip to North Bend where coach Ross Udey's Bears finished second during a nine-hole quadrangular before a season-best effort the next day.
Easton Chaffee tied with North Bend Central's Trevor Ortmeier for the low score first — 41 strokes. Connor Wayman added 48 and Luke Ladwig shot a 51 as BHS closed with 204 total. Adam Grote carded 64 swings, while Kyle Studanski finished with 65, too.
Landen Oppliger led the Bears' junior varsity efforts, taking 50 swings over nine holes.
Then, in Oakland, BHS shot its low score of the season over 18 holes.
“I'm elated,” coach Ross Udey said after the 363-stroke effort.
Chaffee shot a 75, earning third. He took just 34 swings on the back nine holes.
“I made a lot of long putts,” the lead Bear said.
He did it by hitting the ball straight.
“I made that happen with practice,” Chaffee explained.
The highlight hole was No. 18 when he shot from 110 feet and placed it just 4 feet from the cup.
Kalvin Lorenzen, meanwhile, shot a 90 for BHS, while Oppliger took 97 strokes. Connor Wayman added 101 and Rylan Blattert carded 108.
BHS next competes 9 a.m. today in Lincoln. The Bears are at Pioneers Golf Course for the Eastern Midlands Conference Tournament.