Blair Bears (4-3 overall) host Ralston (3-3) at Krantz Field, 7 p.m. today
The Blair football team has flexed its muscle in recent weeks, routing both Omaha Roncalli — 42-7 — and Omaha Gross — 54-14.
Ralston, meanwhile, is 1-1 over its last two games. The Rams beat 1-6 Elkhorn North 48-21, but were bested by Omaha Skutt 42-7 last week. They, like the Bears, are 1-2 against Beatrice, Plattsmouth and Elkhorn.
Against North, Ralston running back Rashad Madden ran for 240 yards and four touchdowns. He added 79 to go with 88 receiving yards against Skutt, too.
Blair's Dex Larsen ran for 250 yards against Gross and has 816 for the season to go with 17 total touchdowns. Livai Opetaia has added 429.
Bears quarterback Morgan Rump is completing 65 percent of his passes for 1,131 yards, while Kip Tupa and Nolan Osterhaus have made 25 and 23 catches, respectively. Osterhuas has 397 receiving yards and seven touchdowns, while Tupa has 345 and three.
Defensively, Larsen has 48 total tackles. Osterhaus has 42 and Lance Acker has 35.
Nolan Ulrich leads the Bears with 5.5 tackles for a loss of yardage.
Osterhaus (2), Larsen (2), Gage Casanova (1), Brady Brown (1), Acker (1), Dane Larsen (1), Tupa (1) and Cole Wilkins (1) have combined for 10 Blair interceptions this fall.
Attendance guidelines: BHS activities attendance is limited to immediate family members — parents, siblings and grandparents — of each participant, including the BHS band. A socially-distanced, masked section will be available for students.

Fort Calhoun Pioneers (1-6) host Omaha Concordia (0-7), 7 p.m. today
Fort Calhoun struggled in last Friday's loss to Arlington, but the Mustangs have yet to come out on top this fall. Their closest game was a 12-6 loss to the Eagles, but they haven't come within 10 points of any other team on their schedule.
Dillon Dierks leads the Pioneers' offense with 657 rushing yards, while his brother Clint has 378. Ty Hallberg has thrown for 599 with Zane Schwarz catching 31 passes for 380 yards. Jayden Hunter has 18 receptions, including FCHS' only one for a score.
Defensively, Dillon Dierks has 54 total tackles and Tristan Fuhrman has 40. Zeke Fickbohm, Carsen Schwarz, Dierks and Zach Nelson have recovered fumbles.
Senior Jake Seina improved to 3-for-4 on field goal attempts last week.
Attendance guidelines: There are no attendance restrictions for the Pioneers' home game, though fans from each team will still be separated. FCHS students will watch the game from the north high jump pit with masks on.

Arlington Eagles (2-5) at Boys Town (2-5), 7 p.m. today
Both Arlington and Boys Town are 2-1 in district play with losses to the team at the top of the standings — Logan View/Scribner-Snyder. The Eagles lost to the Raiders 21-13 on Sept. 25, while the Cowboys fell 24-0 a week later.
Last Friday, however, Boys Town topped Douglas County West 33-6.
Arlington's Josh Miller pushed his season passing yards total to 828 with 182 against Fort Calhoun last week, while receiver Dustin Kirk is up to 302 after his 142-yard night. Nick Smith has hauled in three touchdowns.
Attendance guidelines: Visitor attendance at Boys Town is limited. Fans who are able to attend are required to wear masks at all times and asked to social distance. 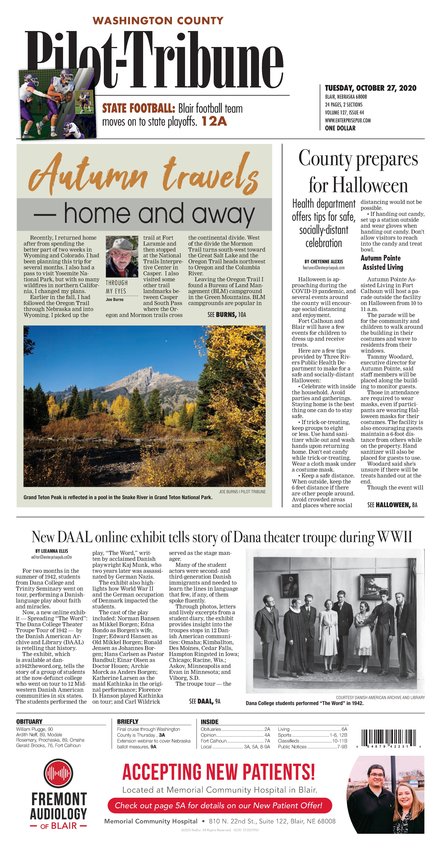