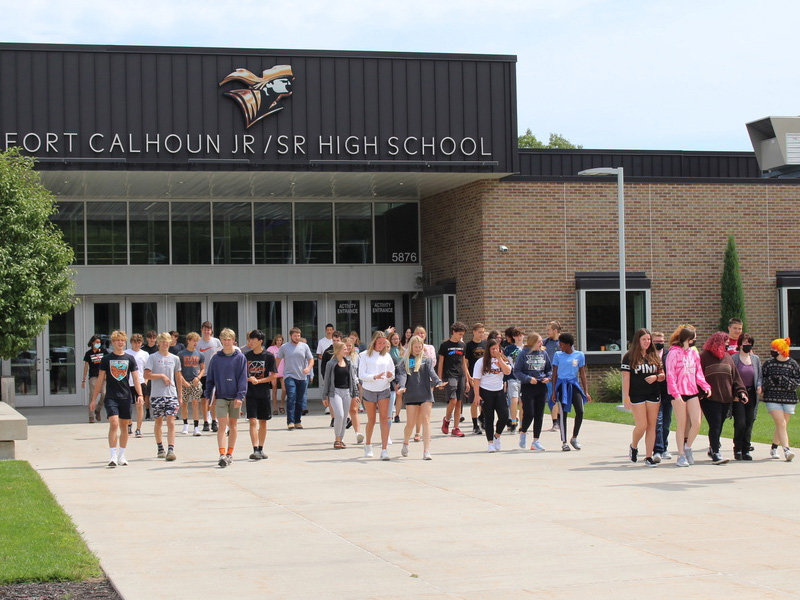 It was one of five schools in Nebraska to receive the honor and 325 nationwide.

“When we got the email, I went down and told (Principal) Nick (Wemhoff). Literally, we both, it was goosebumps. It was goosebumps,” Fort Calhoun Community Schools Supt. Jerry Green said. “I'm not quite sure I grasp all of it just yet. When you're talking about five schools in the state and 325 in the nation on a national world, process that a little bit. That's a big deal. We're really excited about it right now, just trying to unpack it all.”

The recognition is based on a school's overall academic performance or progress in closing achievement gaps among student subgroups, according to a press release.

“This year's cohort of honorees demonstrations what is possible when committed educators and school leaders create vibrant, welcoming and affirming school cultures where rich teaching and learning can flourish,” U.S. Secretary of Education Miguel Cardona said. “I commend all our Blue Ribbon honorees for working to keep students healthy and safe while meeting their academic, social, emotional and mental health needs. In the face of unprecedented circumstances, you found creative ways to engage, care for, protect and teacher our children. Blue Ribbon Schools have so much to offer and can serve as a model for other schools and communities so that we can truly build back better.”

Fort Calhoun was nominated in the exemplary high performing schools category. It's the first school from Washington County to be named a Blue Ribbon School.

Green said the recognition was a great award for the district.

“It's some validation of all of the hard work that our staff and our students put into the day-to-day work that goes on in their classrooms,” Green said. “From the district as a whole from the administration to the secretaries to the cooks who feed them every day to the bus drivers that get them here every day, we're all part of a system that tries to build success in students. That system has been successful.

“When you get an award like this, you know you're going down the right path and you're doing what's really best for kids,” he added.

Wemhoff said the honor gives the school validation for the teachers' and students' hard work.

Wemhoff said he was told by the Nebraska Department of Education that Fort Calhoun was one of the first, if not the first, 7-12 school from Nebraska to be nominated for the award.

“We're the first one they've taken 7-12 because we hit the benchmark on all of them” he said.

Green and Wemhoff said they planned to tell the students about the honor during the homecoming pep rally Friday. The staff and board of education had already been notified.

The district is also planning other celebrations with students and staff to mark the achievement.