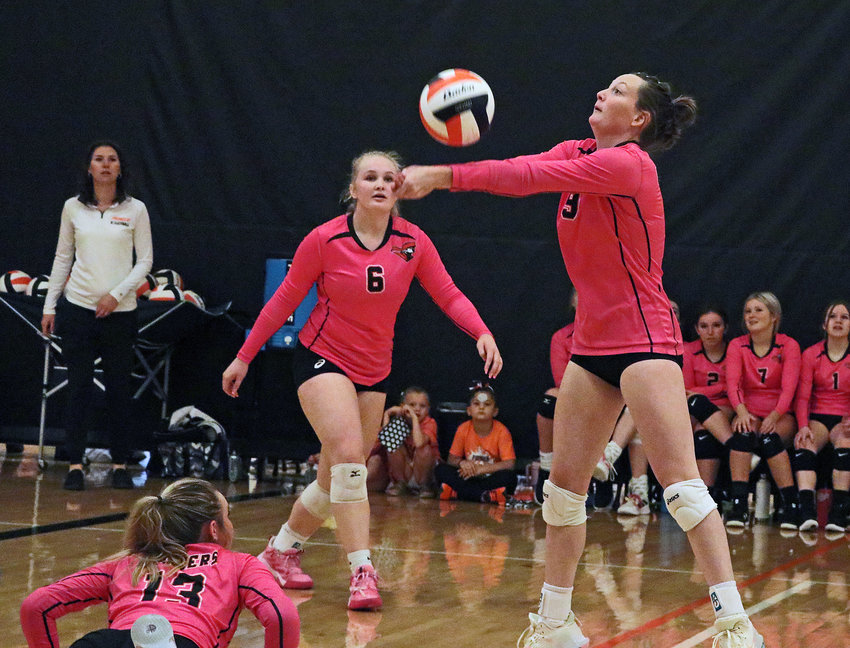 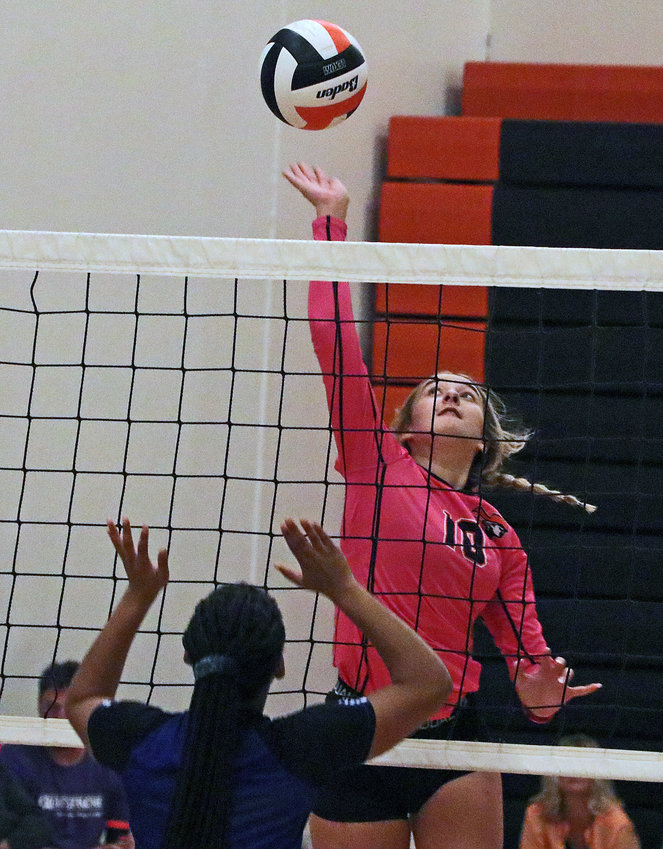 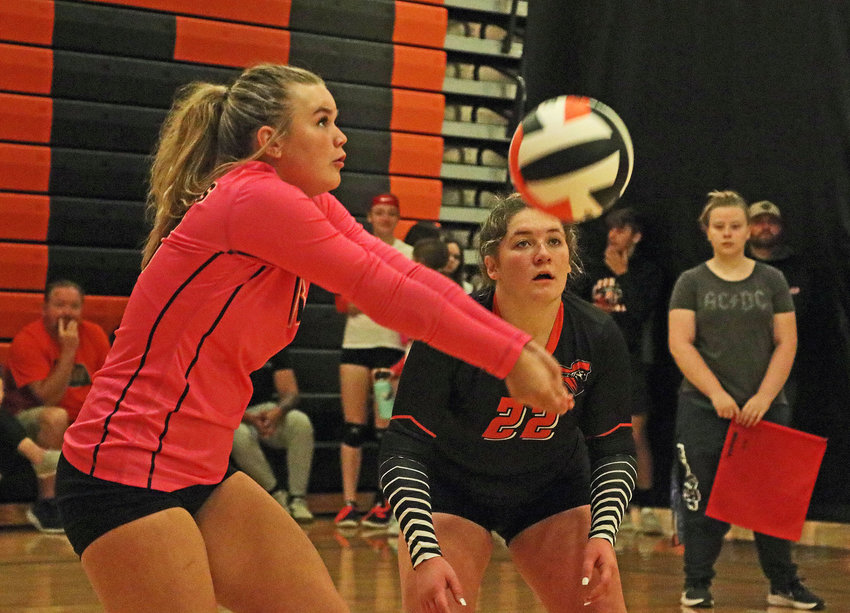 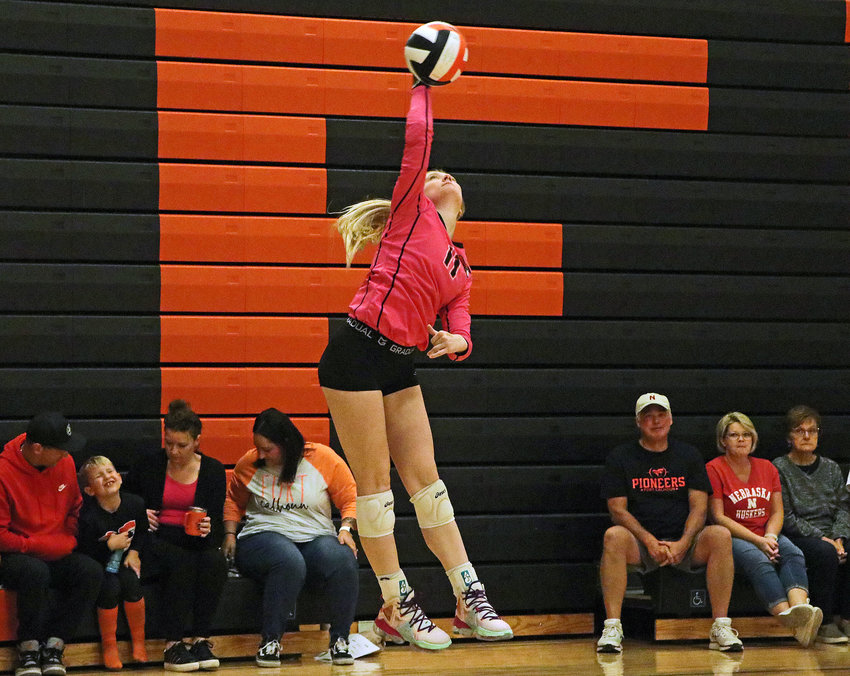 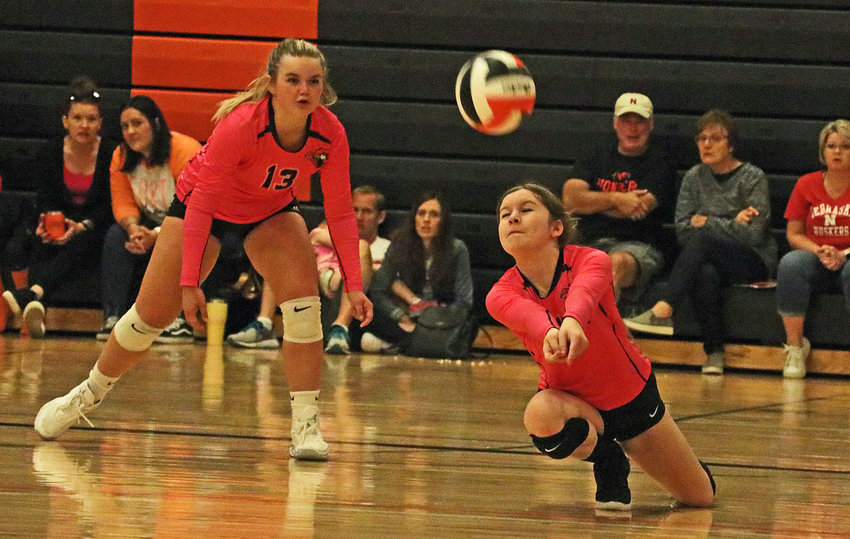 The Pioneers were in the gym early Saturday morning for their eight-team Fort Calhoun Volleyball Classic.
“It's just hard to get up and be ready to go at 7, 8 in the morning,” senior Olivia Quinlan said.
The setter and her teammates knew their objective, though, and went 2-2 to finish fourth overall. FCHS (8-12 overall) beat Boys Town and Conestoga, but lost a pair of two-set matches to Omaha Concordia — the third-place finishers.
“I think this is the best we've played on a Saturday, for sure,” Quinlan said. “Some girls came in handy in spots they haven't come in handy yet this season.”
Junior libero Mollie Dierks said the Pioneers would have liked to have finished higher.
“But we've got room to improve,” she said.
After a 25-22, 25-10 loss to Concordia to start the tournament, Fort Calhoun played it again for third place. The Mustangs won the first set 25-16, but struggled to pull away from coach Liz Sevcik's team during the 25-20 second.
A Raegen Wells ace pulled the Pioneers within 17-15 before Quinlan's crafty, light tap over the net evened the set at 17-all. The home team tied the score at 20-20, too, but Concordia, ultimately, earned the win.
Dierks said FCHS played better together to contend against the Mustangs. It communicated better, it followed the ball better with its block and hitters took smarter swings.
In the three-set victory against Conestoga — 25-22, 19-25 and 25-15 — the Pioneers used serve streaks to win, too. First, Quinlan served for her team as it turned a 15-13 deficit into a 19-15 lead. Wells had a back-row kill and Quinlan had an ace during the stretch, but the run was more about consistency.
“If there's an ace, awesome, but just over and in so we can play defense before we are able to play offense,” the senior said, describing her strategy.
FCHS senior Tilden Nottlemann later closed out the three-point set win when her own serve went unreturned.
The Cougars came back and won the second race to 25, but the Pioneers finished their visitors off in the third. From 7-7, Dierks served her team to a 14-7 advantage. Wells, again, had notable kills at 10-7 and 14-7.
Then, at the match's end, Calhoun middle hitter Shelby Dorau beat a Conestoga block with a soft hit to the floor.
The Pioneers advanced with the win, while they could have been removed themselves from top-four Classic contention a match earlier. They played their first elimination match with Boys Town and won, 25-12 and 28-26.
FCHS took control of the first set when Dorau's kills evened the score, 4-4. From there, Madison Buczkowski notched a kill and Ruby Garmong recorded a service ace to give the Pioneers the lead for good.
Fort Calhoun controlled the second set with Boys Town, too, taking a 21-14 advantage when Simone Bonacci's serve went unreturned. The opposition cut the match close as the Pioneers experimented with underclassmen substitutes Haylee Wallace, Taylor Stewart, Jovi Greiner and Bonacci, but the home team persevered.