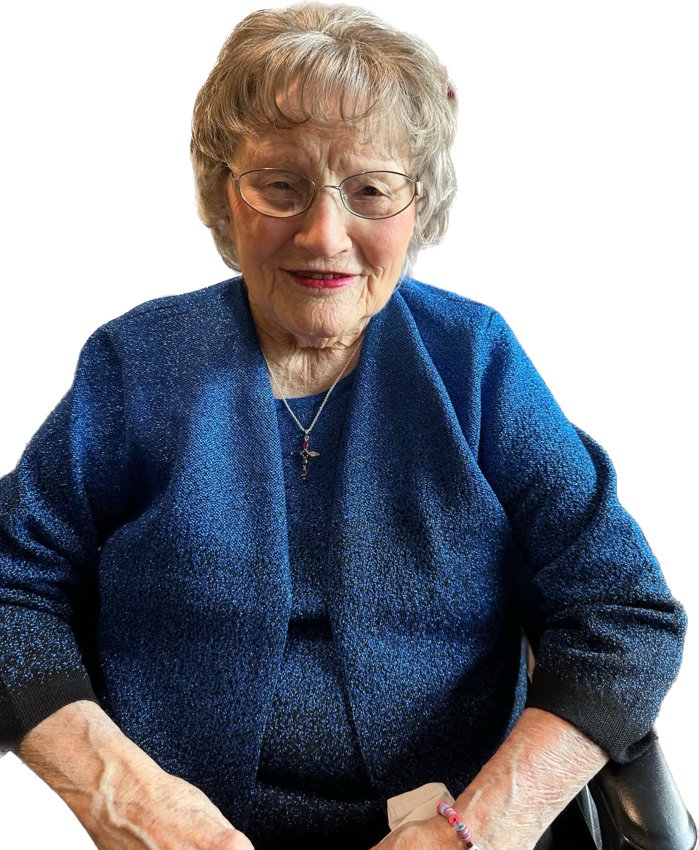 Fae Lorraine Everhart Williby, age 104 of Blair, went to be with the Lord on Friday, Jan. 20, 2023, surrounded by her loving family.  Funeral services will be held at 10:30 a.m. Wednesday, Jan. 25, at First United Methodist Church in Blair.  Graveside services to follow in the Blair Cemetery.  Visitation will be held Tuesday, Jan. 24, from 6 to 8 p.m. at Campbell Aman Funeral Home in Blair.
Fae Lorraine Everhart Williby, was born on Dec. 16, 1918, in Brunswick, the first child of John Marion Everhart and Laura Alvina Geiler Everhart.
She attended country school in Orchard, and graduated from Neligh High School in 1937. Fae worked for the Orchard Newspaper until her marriage.
On Dec. 29, 1943, she was united in marriage to James Calvin Williby.  After marriage they moved to North Carolina until Jim was shipped overseas.  At that time she moved to Blair, where she resided until she moved to Fallbrook Assisted Living in Lincoln in January of 2021.  She was employed at the Enterprise Publishing Company for twenty years as a linotype operator, and also worked for Chapman Plumbing until retirement in 1969.  She later worked part-time at Diane’s Boutique in Blair.  She enjoyed visiting with people and was an excellent employee.  She will be remembered as a kind and loving friend to everyone she met.
On Oct. 26, 1946, she was blessed with her first child, Ronald James, and on Jan. 1, 1950, her daughter, Cheryl Fae, was born.  Her whole life was taking care of her family as a wonderful supportive wife and mother.  She was a member of First United Methodist Church, for over seventy years, where she taught Sunday School and was a member of United Methodist Women.  She was also very active in the VFW Auxiliary and Royal Neighbors.
She is survived by her son, Ron, (Nancy) and daughter Cheryl (Nick) Wood.  Grandchildren; Bryce Williby (Camie), Nicole Barber (Zach), Lisa Gatewood (Scott), Brian Wood (Chelsea), Jill Garrett (Jason) and Abby Matlock (Tony).  Nineteen great-grandchildren and two great-great grandchildren.  She is also survived by many nieces and nephews and family and friends.
She was preceded in death by her husband, Jim, her parents, her brother, Marion Everhart and wife Catherine, and sister Delores Rouse, along with many brothers-in-law and sisters-in-law.
Arrangements by Campbell Aman Funeral Home.