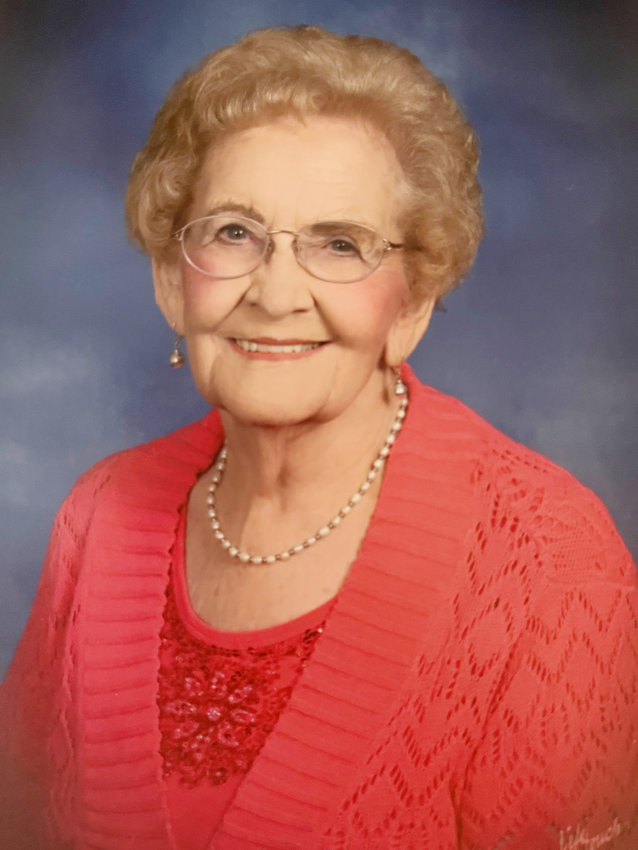 Dorothy Nickoline Kvols Thomas went to meet her Lord May 19, 2021. Services will be held Saturday, May 22, 2021, at First Lutheran Church in Blair at 9:30 a.m. Graveside services will follow at the Laurel Cemetery at 1 p.m. in Laurel, Neb.

Dorothy was born in Randolph, Neb., on June 25, 1919, to Nick and Marie Kvols.   Dorothy attended a one room country school and later graduated from Laurel High School. She was the first female to attend college from her church and the first in her family to obtain a college degree. Dorothy attended Dana College one year before starting her teaching career. Two years later, Dorothy worked at the Indian Reservation by Yankton, S.D., before going on to teach in the Bloomfield and Wisner school districts.

Dorothy married Air Cadet John Thomas at the United Lutheran Church in Laurel.  This was the same church where she had been baptized and confirmed. After John finished his military service, the family lived on a farm north of Laurel; here four children joined their family. After leaving the farm, Dorothy and John bought Laurel Well and Plumbing; five years later they moved to Dresser, Wis.

Dorothy retired after 47 years in education.  This allowed her opportunity to become more involved in her church and in serving her community.  Dorothy served as a leader of Community Bible Study for 25 years and a speaker for Christian Woman’s Club for 28 years.  Dorothy loved her volunteer work at the Food Shelf, the Soup Kitchen, and the hospital.  She was an active member at the Lutheran Church of the Good Shepherd, served as Sunday School Superintendent, ongoing member of the church council, active member in Debra Pricilla Circle, lay reader, usher, counter, greeter or wherever there was a need.  She remained active in Hiking Club, A.D.K., Teachers Retirement and Top Notches. Her home was always open and all were welcome and greeted with a smile.

In 2008 Dorothy moved from Duluth, Minn., to the Crowell Home in Blair.  She became active in the home’s activities and an active member at First Lutheran Church.

Dorothy was proud of her family and she loved being a wife, mother, grandmother and a friend that encouraged and helped many. Her smile and positive attitude will be greatly missed, but we are so glad God could use her and bless her so abundantly.