BHS softball is 2-2 through 1st weekend 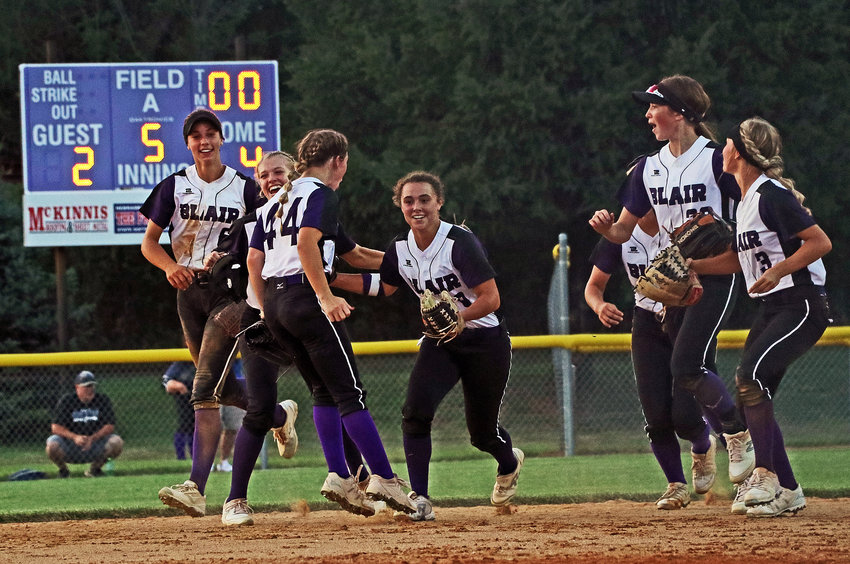 The Blair softball team celebrates with Cailey Anderson, middle, on Thursday after her diving catch in right field at the Youth Sports Complex.
Grant Egger 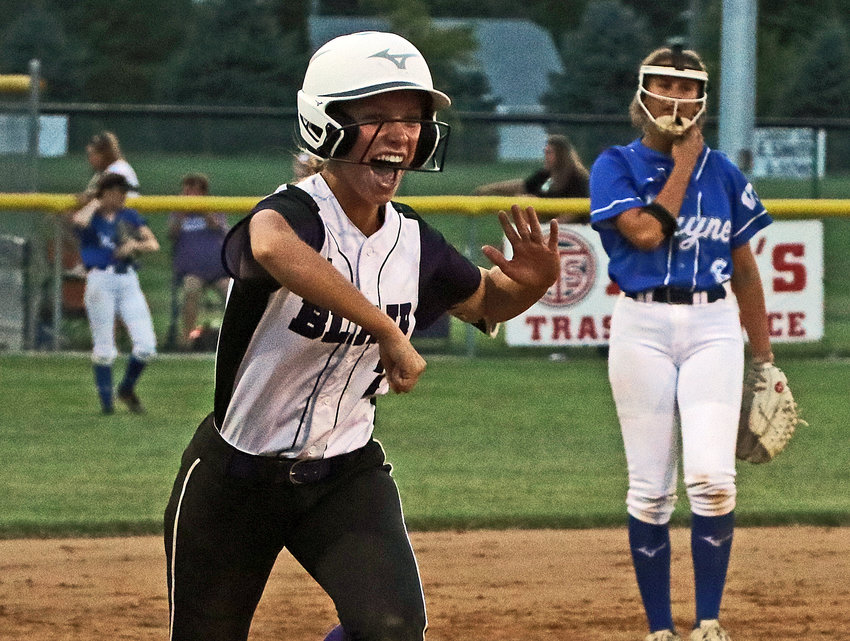 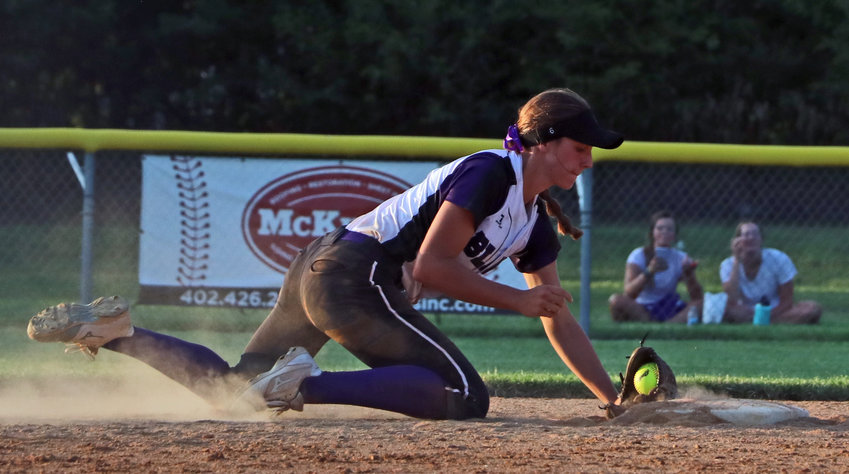 Blair shortstop Tessa Villotta tags second base for a force out Thursday at the Youth Sports Complex.
Grant Egger 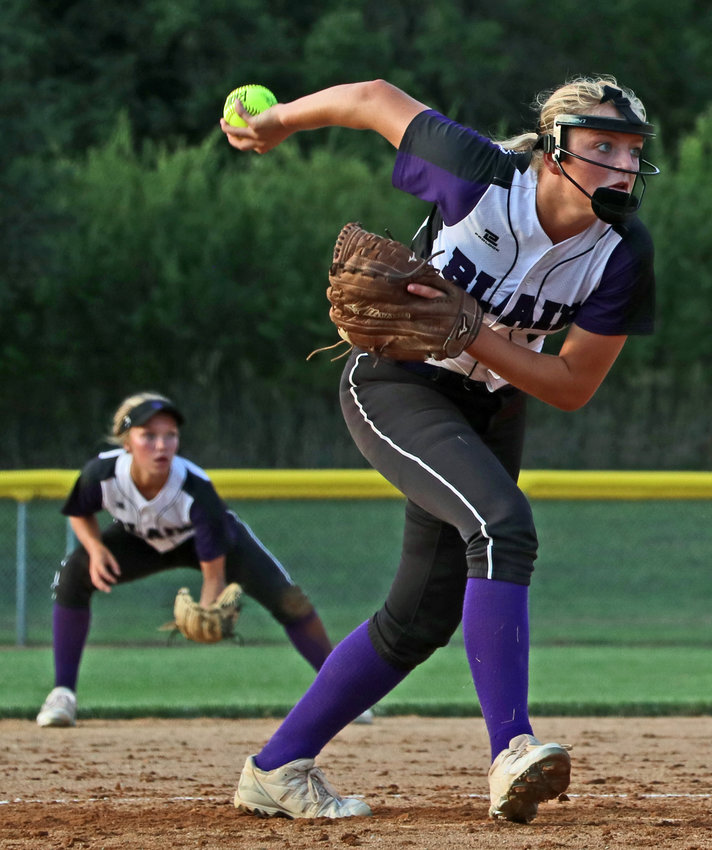 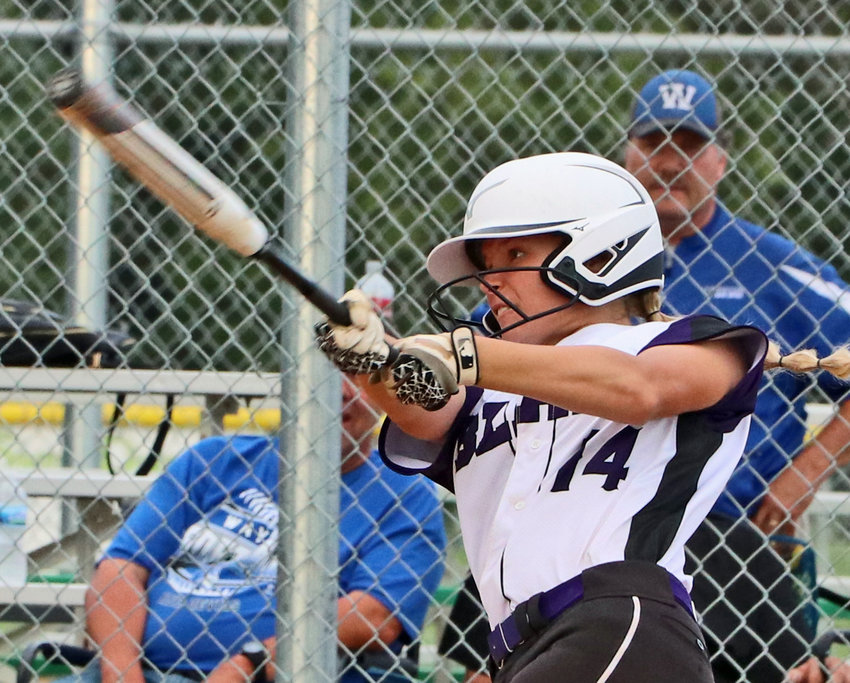 Wearing shoulder and elbow ice bags customary to her postgame routine, Blair junior softball player Cailey Anderson pointed out the grass stains earned Thursday night by her play in right field.
With her team ahead just 4-2, the Bear saved a Wayne run or two from scoring during the fifth inning of the season-opener with a diving catch near the foul line.
Ultimately, they were runs coach Jennifer Fangmeier's team could have spared. Spurred on by Anderson's glove work, Class B No. 8 BHS scored four runs during the bottom half and won convincingly, 8-3. The outfielder's dive, Leah Chance's 3-run homer and Tessa Villotta's 4-for-4, three-RBI night highlighted the Bears 1-0 start.
“I was playing pretty far over because the wind was blowing out tonight, but I was able to just go up,” Anderson said, describing her catch. “Honestly, it was such an in-the-moment thing. I was all-or-nothing and I just went for it.”
The fifth-inning sang ended the inning, started a team-wide celebration and led directly into Blair's most productive offensive inning of the night.
“I've been laying out left and right, all over the place, at practice,” Anderson said. “So, I've just been waiting for this moment to happen.”
Taylor Larson and Reese Beemer drew walks to follow up their teammate's effort, setting up Chance to hit herself out of what she said have been recent struggles in the batter's box. Those troubles didn't show as the right-hander sophomore pulled a Wayne pitch over the left field wall and into the bullpen, securing a 7-2 BHS lead.
“I was looking for an inside pitch and I was on the plate, and I was just ready to crush the ball,” Chance said. “When I felt it, I knew it was out.”
Nessa McMillen — who earlier hit an RBI double off of the outfield wall — singled next before Villotta plated her, securing a perfect, 4-for-4 night. The RBI was Chance-McMillen-Villotta trios' seventh of the night. Sophia Wrich, the sophomore starting catcher in the No. 4 spot of the lineup, notched the Bears' other during opening inning of the season.
Defensively, Blair's Kalli Ulven threw the first two innings, striking out three Wayne batters before Ally Lynch pitched the next five. The latter right-hander struck out four, building her confidence for a successful junior season.
“Positivity and having a good mindset is really my big goal this year,” Lynch said.
Overall, the Bears are focused on more fun nights at the ballfield this season.
“We use the word, 'Switcheroo,'” Lynch said. “When someone says anything negative, we make it opposite and we tell them the opportunity they can have.”
Anderson had a chance to make a diving play Thursday night and did, earning some grass stains to start the fall.

Bears compete in Chieftain Invitational
BHS followed up its season-opening win with a 1-2 showing at the Bellevue East Chieftain Invitational on Saturday. The tournament was supposed to take place over two days before rain shortened its schedule.
First, the Bears started fast and defeated Class A No. 7 Papillion-La Vista South 9-6. Coach Fangmeier's team led 6-1 through two innings and outhit the Titans 11-9 for the game. Ulven started things off with a first-inning, two-RBI single.
In the second game, Millard West toppled Blair, 6-2. The Wildcats scored all of their runs during the second inning.
Then, in the finale, the Bears jumped out to a 7-1 lead, but lost a 9-8 game to the Millard South Patriots.
BHS next plays 6:30 p.m. today at the Youth Sports Complex. It plays Omaha Gross.