‘Devil All the Time’ a chilling thriller

On the surface, small-town America is as harmless and innocent as the day is young. In “The Devil All the Time,” though, the film peels back the layers of secrets, lies and harrowing tales in those sleepy little towns.

Newly released on Netflix, the film centers around Willard Russell (Bill Skarsgard), a World War II veteran who is haunted by seeing things a person simply should never see during his time in the war. Fortunately for Willard, he finds comfort in his wife and young son and tries to be the best husband and father he can be.

Adding to this interconnected story is Carl Henderson (Jason Clarke) and his wife, Sandy (Riley Keough). The couple seems nice at first, but as it turns out, they are both serial killers and spend their days picking up young male hitchhikers on the road and killing them.

To complicate matters, the local sheriff and “law of Southern Ohio,” Sheriff Lee Bodecker (Sebastian Stan), has a mysterious connection to both Carl and Sandy, preventing the couple from being arrested and punished for their heinous crimes.

As 10 years pass, the story shifts to Willard’s son, Arvin (Tom Holland), now a young man living with his grandmother, uncle and stepsister, Lenora (Eliza Scanlen), due to events that lead to his parents' passing.

Arvin is a good kid, but like his father, he has a temper and is very protective of his family. That includes his stepsister, Lenora, who has taken a liking to the new, flashy preacher in town, Reverend Preston Teagardin (Robert Pattinson),

Without giving too much away, Arvin tries his best to turn the other cheek in the face of those who look to do him and his family harm, but there is more violence and corruption in this small Southern Ohio town than even Arvin is aware of. As such, Arvin’s priorities are clear: protect his family at any and all costs.

With all of these characters becoming intertwined and mysteriously connected as the film progresses, Arvin’s 9mm (given to him by his father) never leaves his side, as he discovers generations of secrets hidden deep in the small towns of Southern Ohio and West Virginia.

Perhaps the greatest thing “The Devil All the Time” did was tell this story via narration. With so much time-hopping and characters intertwining, it’s easy to get lost, but the narrator keeps things on track as best as this complicated story will allow.

There is an abundance of talented actors and actresses in this star-studded cast, and it’s a real treat watching their dedicated performances. Skarsgard, Holland and Pattinson are the standouts, and with none of these gentlemen being born in America, hearing their characters’ thick, southern American accents is astonishing and makes you forget about the actors’ European roots.

With this film being released in your living room on Netflix, the temptation is there to pick up your phone during the course of the film, but to truly enjoy this one, it requires your undivided attention. While confusing and muddling at times, if you pay attention, the film will reward you by tying all these characters and stories together,

“The Devil All the Time” will not be for everyone. It’s extremely dark, broody and tough to watch at times. When the film’s at its best, though, it is mesmerizing watching a young man become almost the devil himself to overcome the corruption and evil in his small-town life.

Should some discontinued sodas be reintroduced?

Autumn travels — home and away

Human scalps were once war trophies

What is your favorite Halloween-themed movie?

Poll: POLL: Will the coronavirus pandemic keep your family from gathering during the holiday season?

Board approves solar farm in county 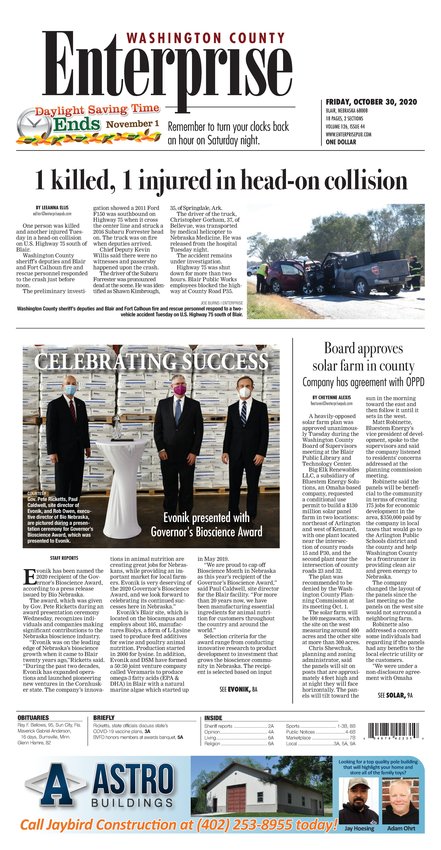