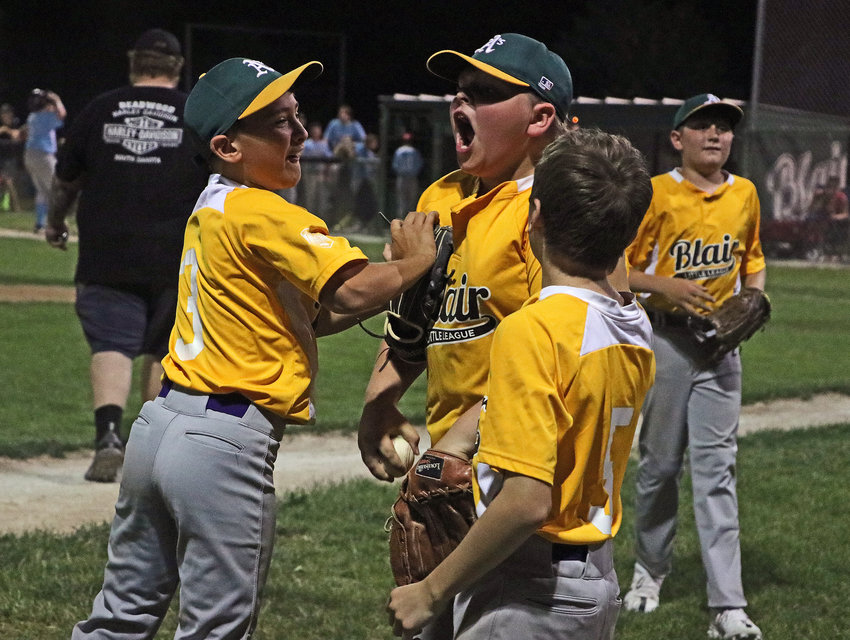 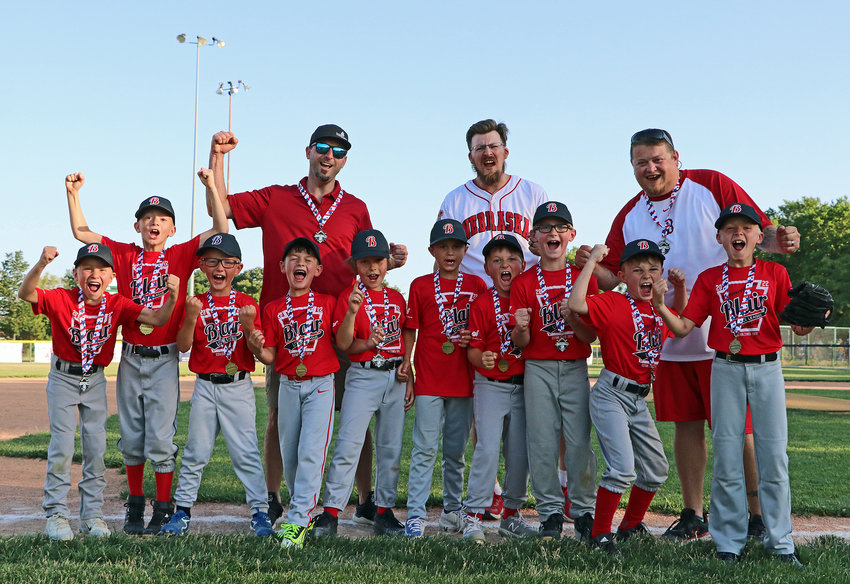 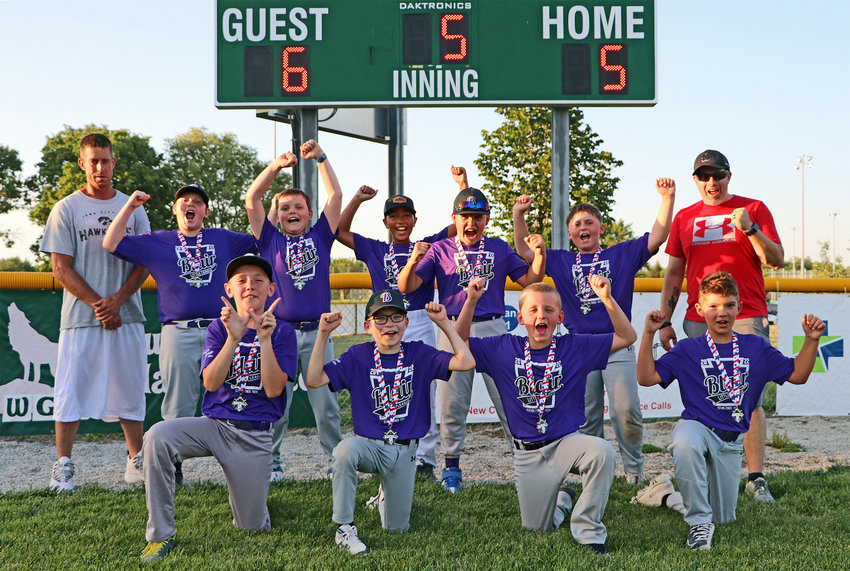 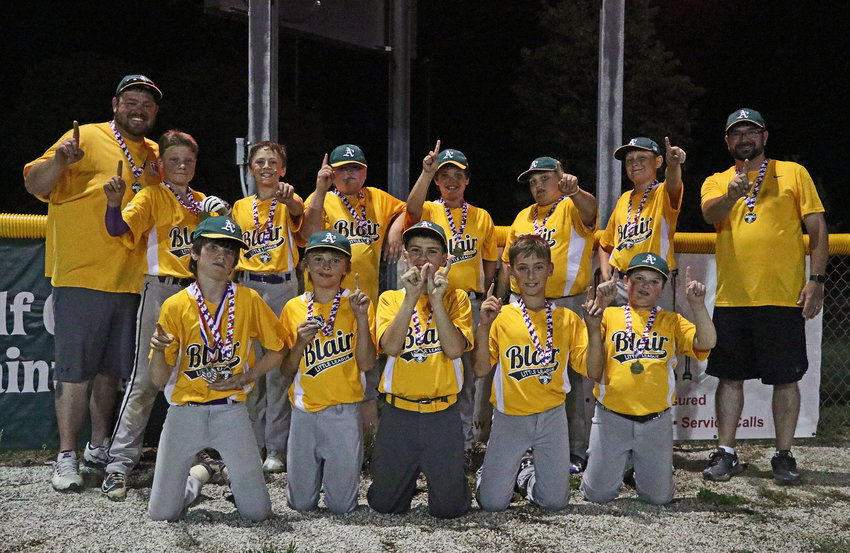 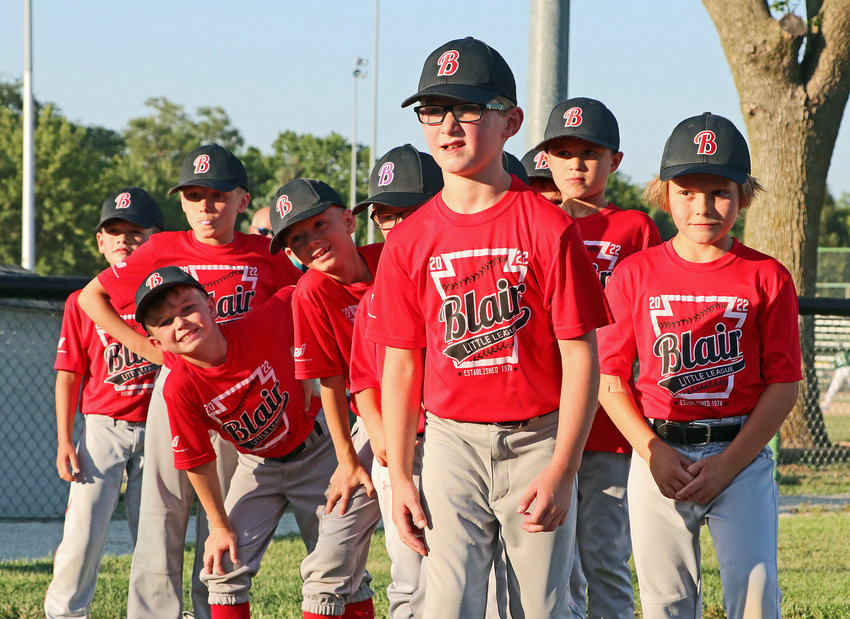 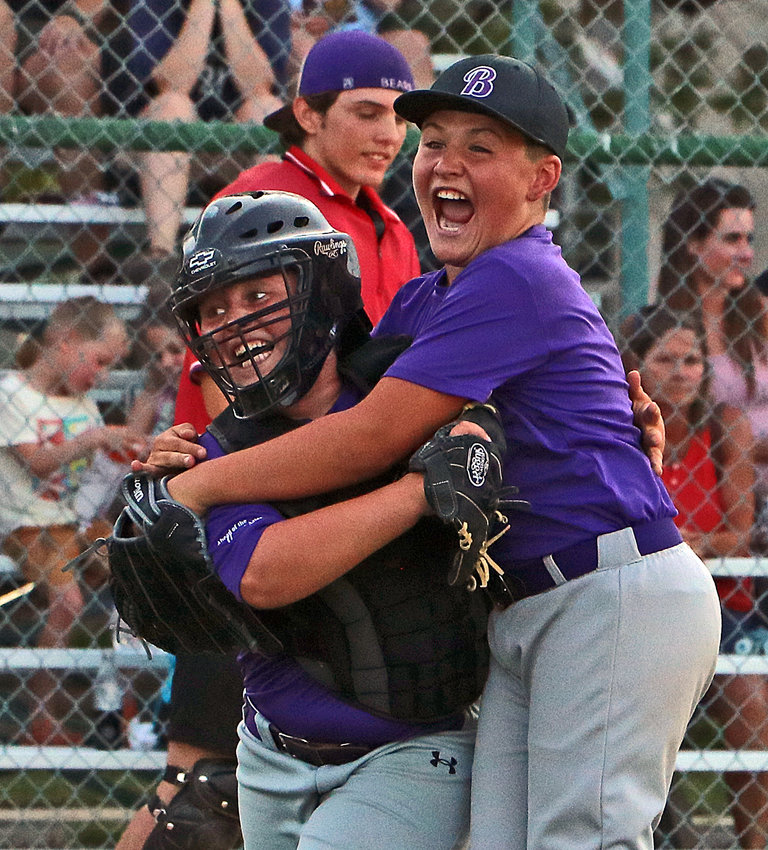 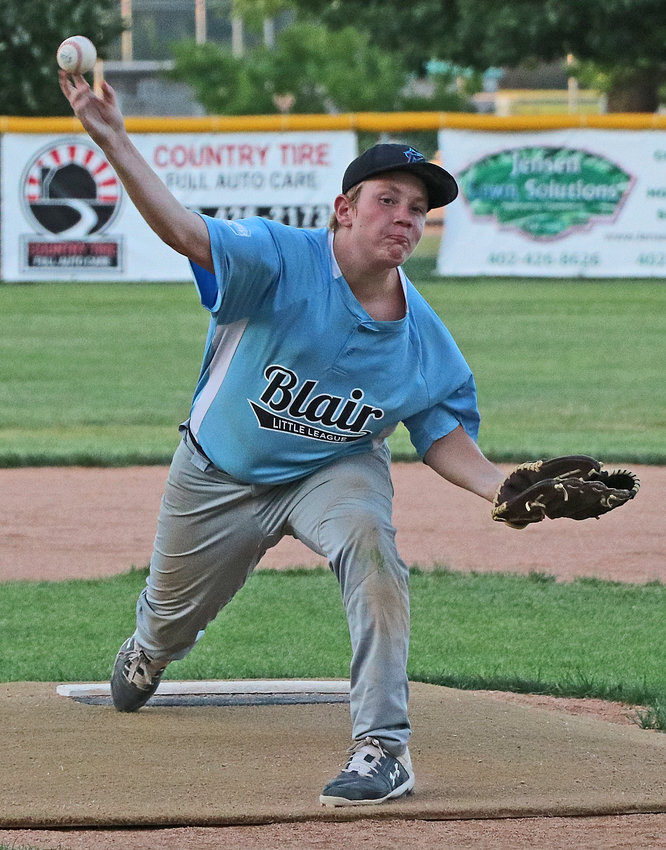 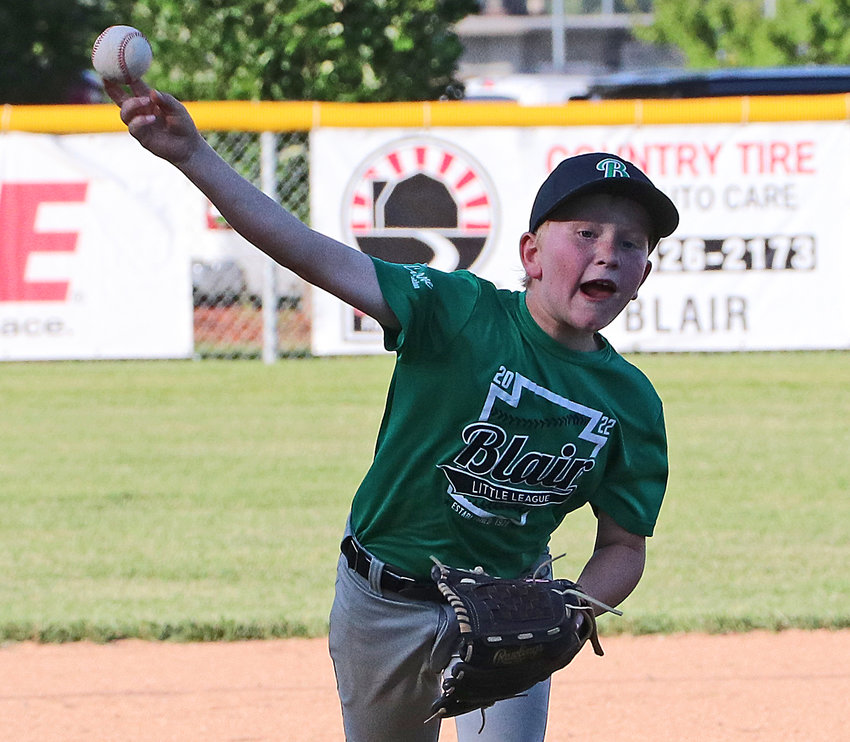 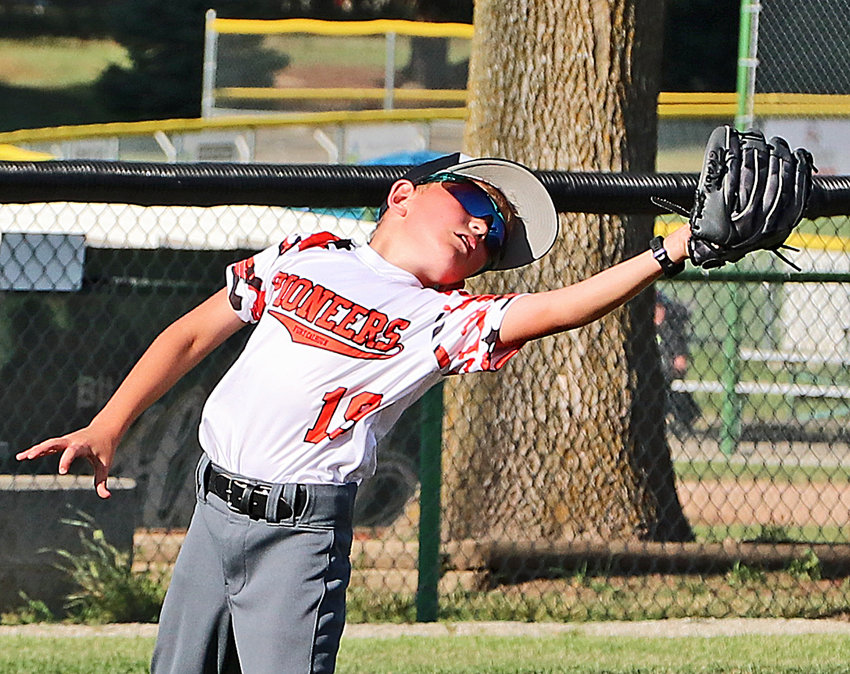 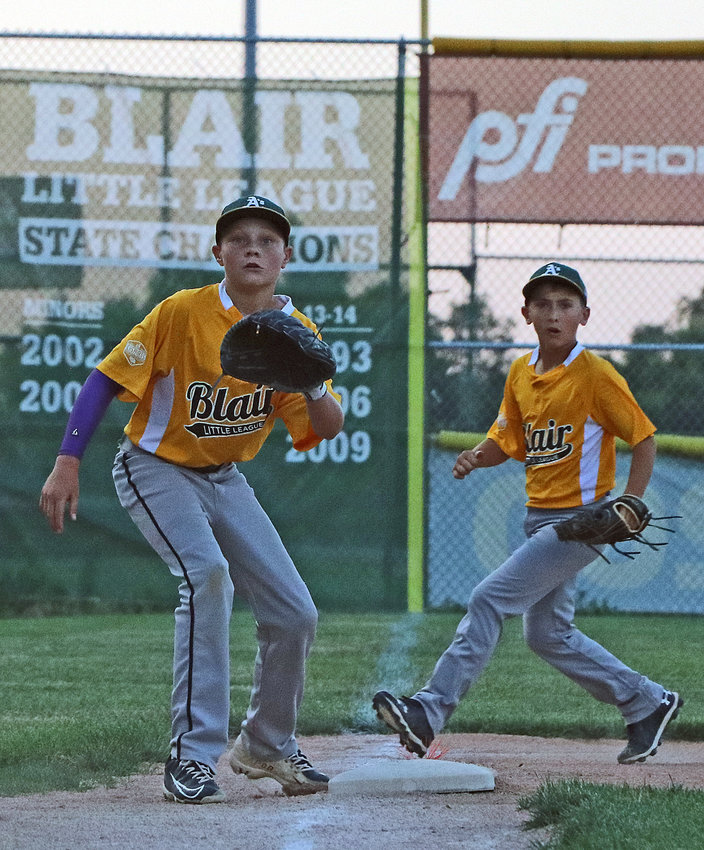 Tyce Larsen, left, and Trace Stratman of the Blair Little League A's wait for a throw from behind home plate Tuesday at Wederquist Field.
Grant Egger
Previous Next
Posted Friday, July 1, 2022 7:00 am
By Grant Egger - sports@enterprisepub.com

Drake Jennings laid down the game-ending tag at third-base Tuesday, capping a night of Blair Little League Baseball tournament title games with an A's celebration.
The infielder's team won the Major League championship game on Wederquist Field, while the Rockies claimed the Minor League final and the Red Sox won the Rookie bracket.
“You know, quite honestly, we spend a lot of time talking about being a family and forming a family within the team,” coach Josh Foulk said after the A's held off the Marlins, 10-9. “The energy these kids play with is a product of that atmosphere. These kids love playing together.”
The coach's championship lineup built a 10-0 lead through two innings. Rowan Morgan plated the first two runs with a first-inning, inside-the-park homer.
The runner-up Marlins responded, though, scoring a four-run third frame. Nathaniel Guynan and Draeson Allen notched back-to-back RBI triples to start the rally.
Then, during the top of the fourth inning, the Marlins scored five more runs before Jennings notched the third out at third base on a steal attempt.
The Rockies, meanwhile, also won a one-run game to win the Minor League title. They beat an A's squad 6-5, scoring the go-ahead runs during the fifth inning. Trailing 4-3 after three frames, Bentley Wolff slid across home plate safe to tie the game.
“They were just fantastic,” coach Dwain Whitehead said of his Rockies. “They played hard and they all had an excellent spirit the entire season.”
A 2-1 ballgame decided the Rookie tournament title, too. The Red Sox beat the Fort Calhoun Pioneers by that score, which was set after just one inning.
“This is my pride and joy,” said Red Sox coach Kevin Reardon.
The youngest boys playing ball at the Blair Youth Sports Complex on Tuesday night celebrated their win accordingly.
“I'll do everything I can to make this happen, you know what I mean?” Reardon said. “The smiles. Laughter. Teaching. I can keep going on and on.”
Blair Little League next hosts a district tournament on July 8-10. The Nebraska Northern Area Minors and Majors Tourney starts with a pair of Keystone Little League games versus Blair at 5 p.m.