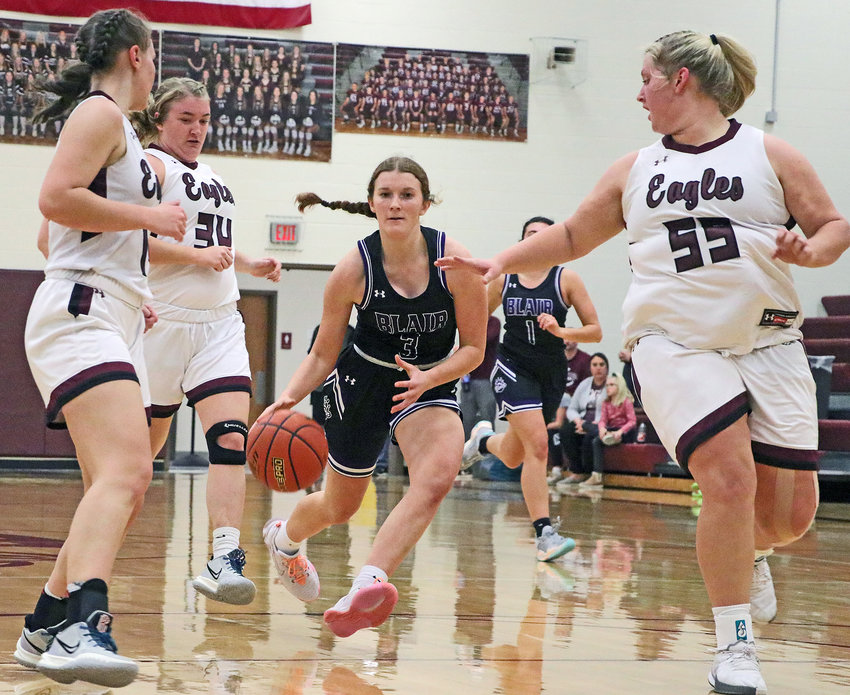 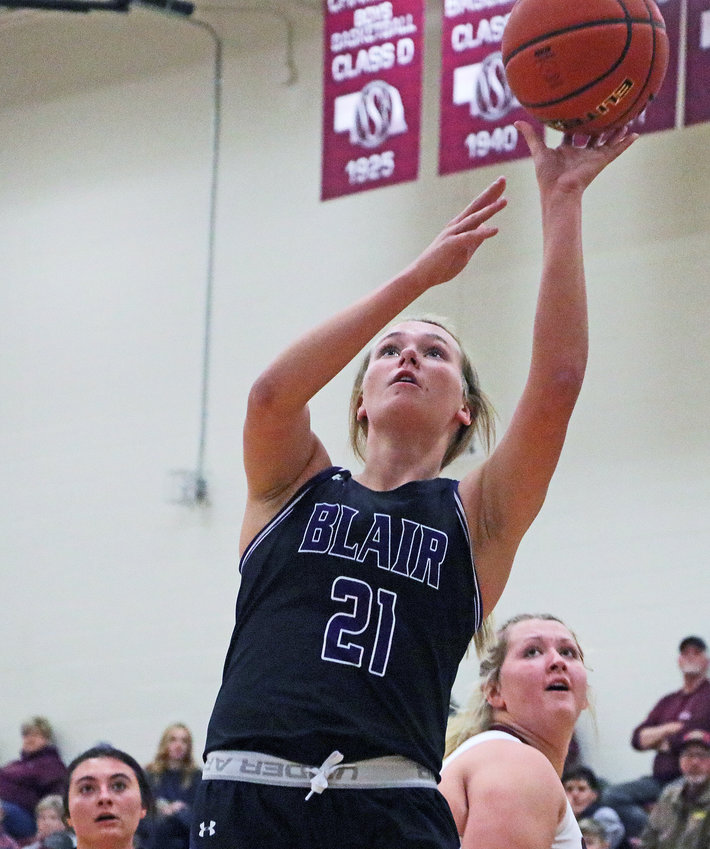 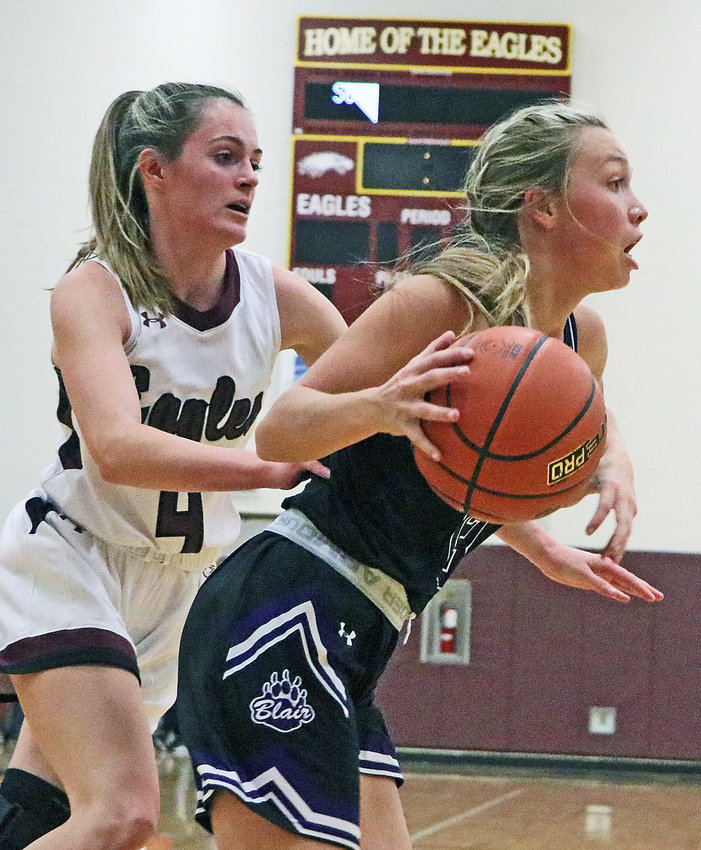 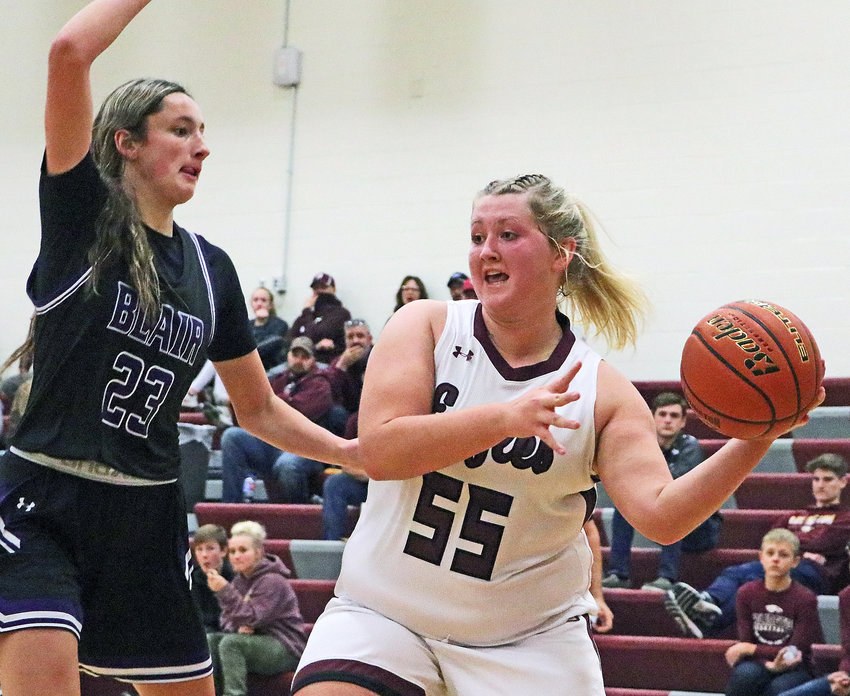 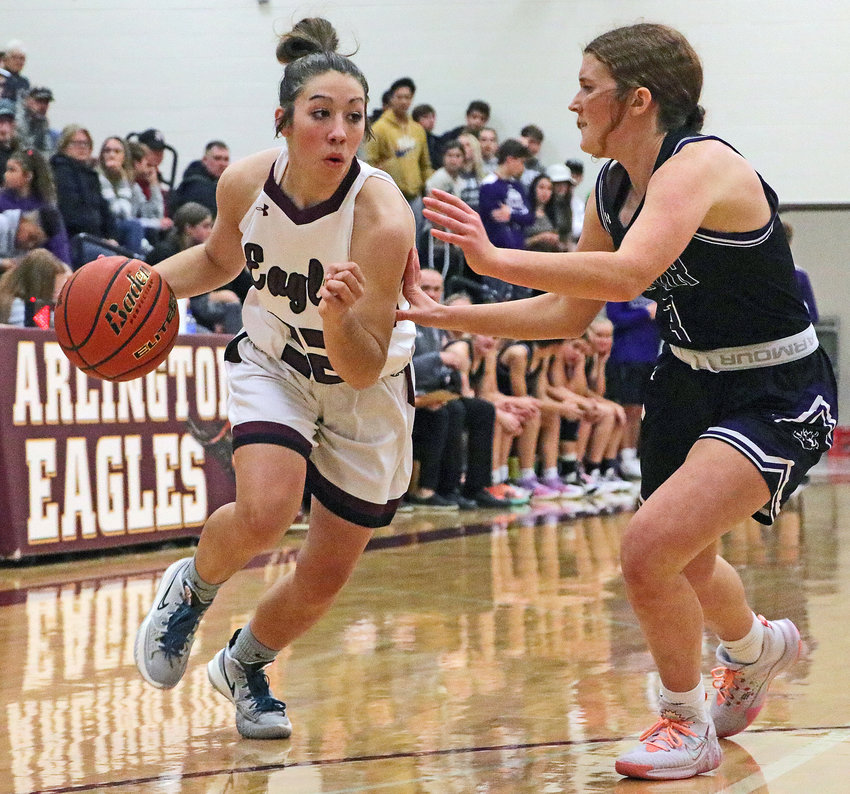 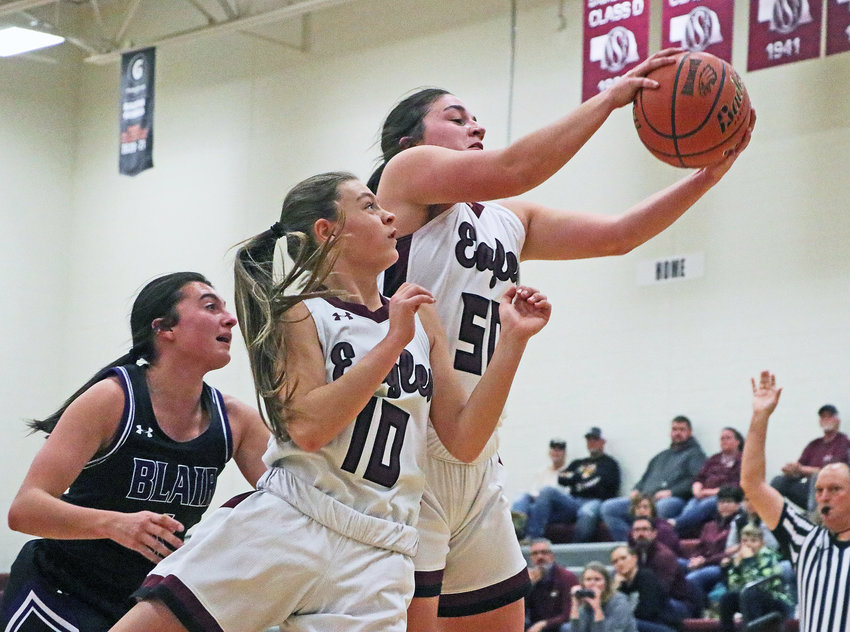 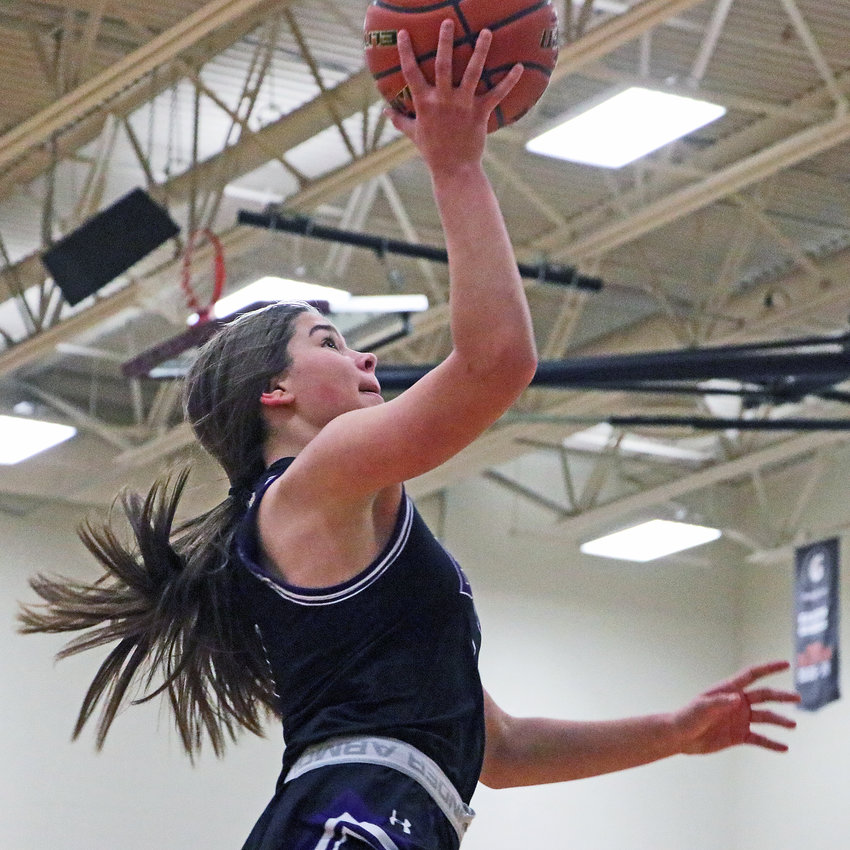 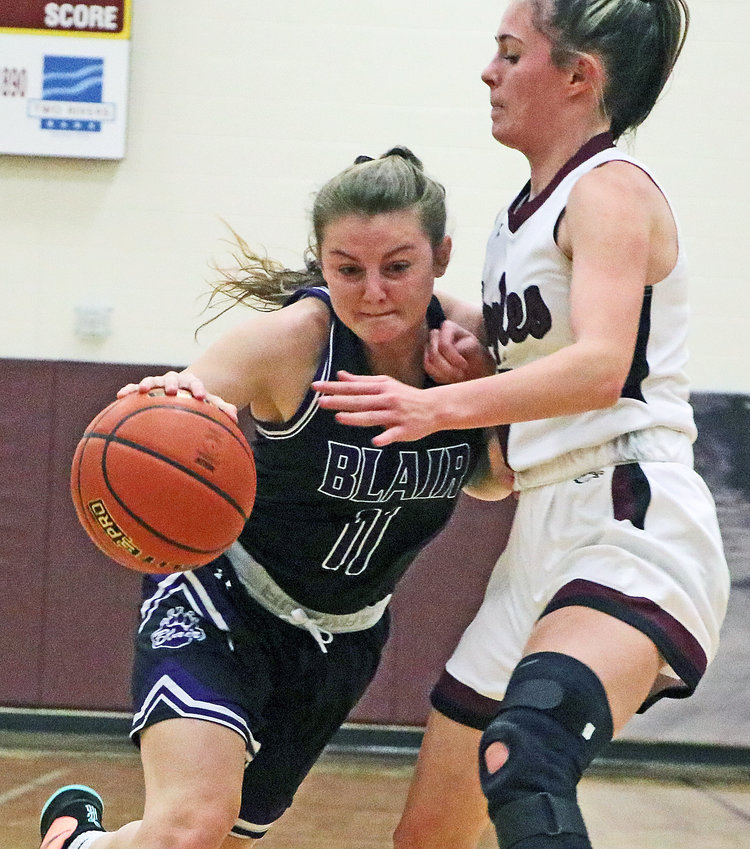 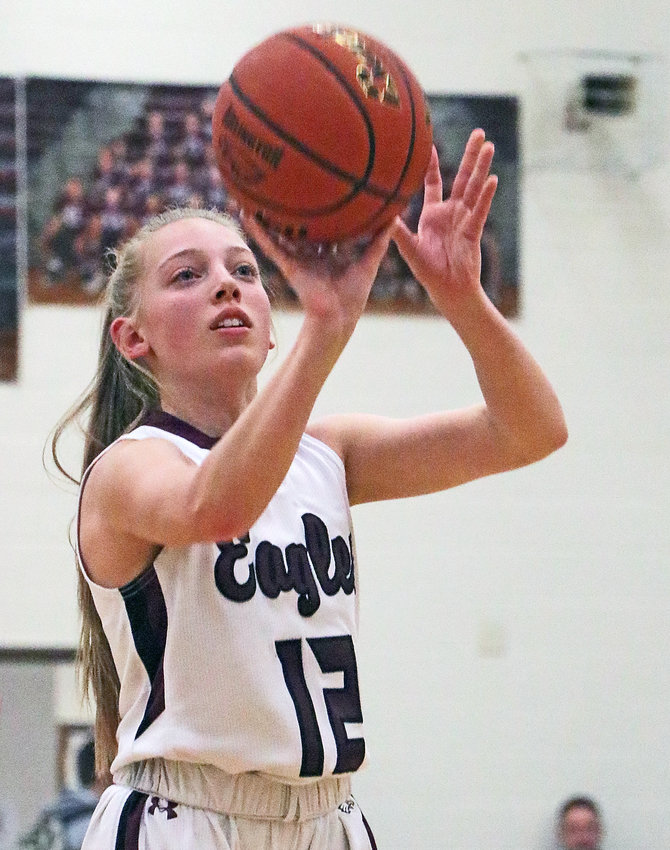 Though her last two basketball seasons ended early by injury, Blair High School senior Avory French still held her ground in the lane and took a charge during Monday's exhibition at Arlington.
The Bears picked their 5-foot-10 post player up off of the floor, celebrating her efforts during BHS' 45-26 Jamboree win.
“We need to bring the lunchpail,” coach Matt Aschoff said of his team's upcoming season. “We need to be the team that gets on the floor. Be the team that helps teammates up.”
The Bears did just that against the Eagles, claiming a 19-point, hustle-filled victory with 11 roster members scoring at least one point.
Meanwhile, short seniors Kailynn Gubbels and Kate Miller, AHS started its winter with an exhibition loss.
“We struggled and I figured we probably would struggle,” Eagles coach Luke Brenn said, citing a young lineup.
Blair started things off against Arlington's inexperience with a 16-2 first period. The Bears scored the game's first 13 points before Stella Lewis hit an AHS jump shot with just about 3 minutes left before the second.
BHS newcomers Molly Ladwig and Kailey O'Grady actually scored their team's first eight points. Ladwig, a freshman, scored the night's first points from beyond the 3-point arc, while her junior teammate from Grand Island notched a bucket to push the early advantage to 5-0.
Aschoff said Ladwig and fellow freshman Addie Sullivan — who, as the Bears' tallest player, hit two 3s Monday — have hit the ground running.
O'Grady, meanwhile, has put in the work since she arrived in Blair.
“She's really done a phenomenal job,” Aschoff said. “I mean, she came in this summer and didn't miss a summer league game. Didn't miss a camp. If she missed a weight room (session), it's because she had to babysit or something like that.”
Though the coach admitted BHS fouled too much against the Eagles, he was pleased with the exhibition effort ahead of next Thursday's season-opener at Omaha Mercy. Ladwig and the 5-11 Sullivan led the Bears with eight points apiece, while French, Makayla Baughman and O'Grady each scored five. Mya Larson and Kaitlyn Johnson scored four points apiece, too.
Arlington, meanwhile, was led by junior Keelianne Green's 10 points. Freshman Britt Nielsen added eight as well.
While his shorthanded team struggled, Brenn said there were positives to take away from the first outing of the 2021-22 campaign, too.
“When we made turnovers, we didn't let it affect us a whole lot,” he said. “We still came back and had that grit and kept fighting. I was happy with that.”
A 19-point exhibition loss to Blair, which has made back-to-back Class B district finals, isn't the end of the world.
“I told the girls, 'This is a scrimmage,'” Brenn said. “Our goals are still intact. The real season doesn't start for another week.”
Plenty of practice time remains before the Eagles open the year next Thursday at West Point-Beemer.
“We've got six opportunities here to get better to, hopefully, open the season up next week and play a lot better,” the coach said. “Maybe come away with a win.”