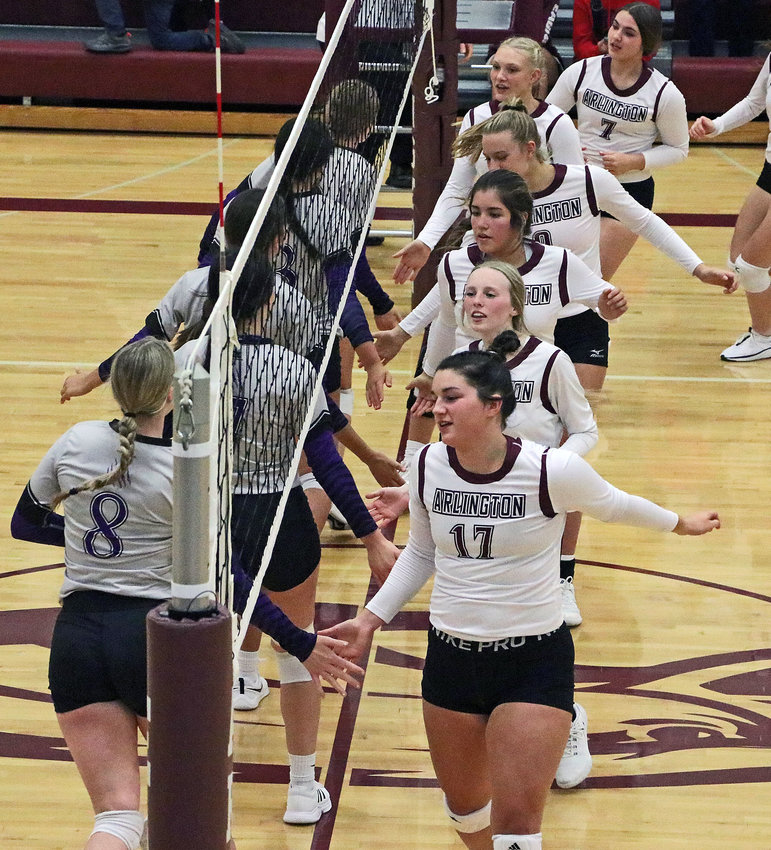 The Blair Bears, left, and the Eagles meet at the net Thursday at Arlington High School.
Grant Egger 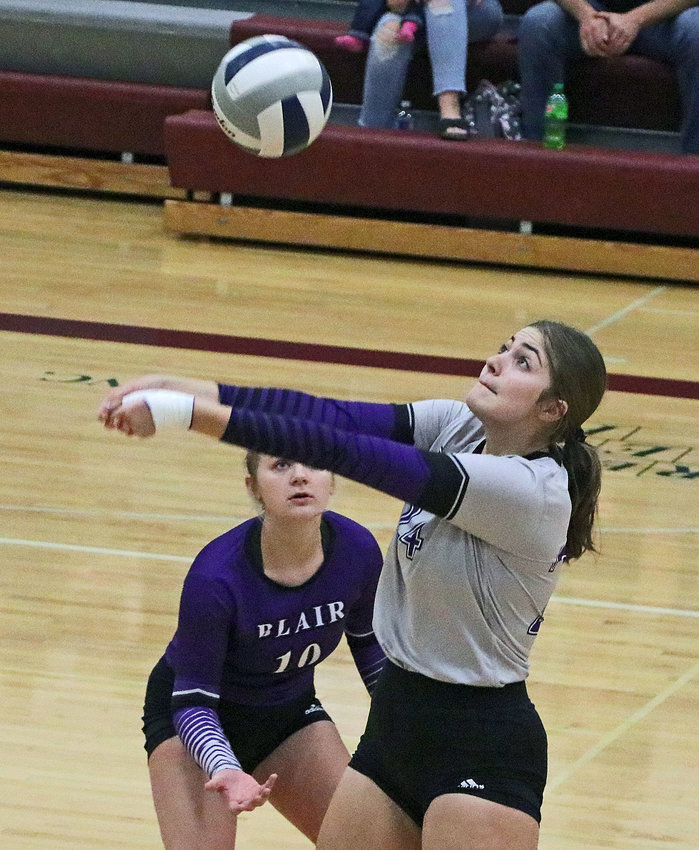 Blair's Peyton Ogle, right, makes a play on the ball with support from Savanah Roan on Thursday at Arlington High School.
Grant Egger 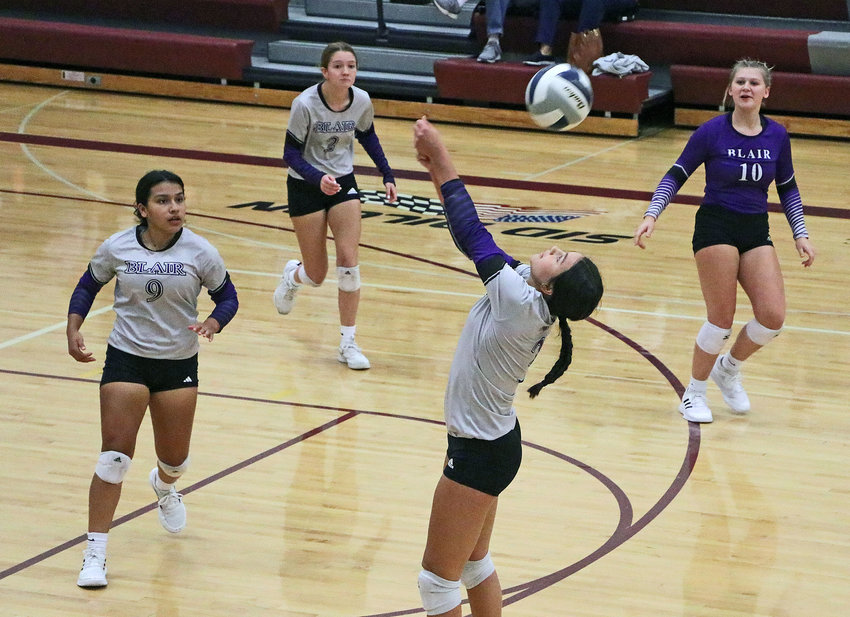 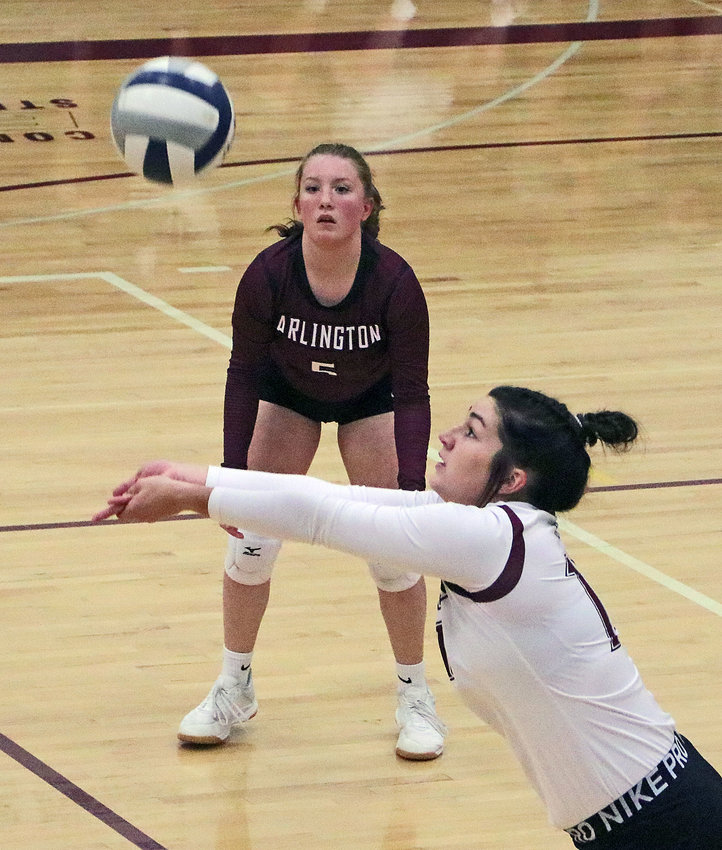 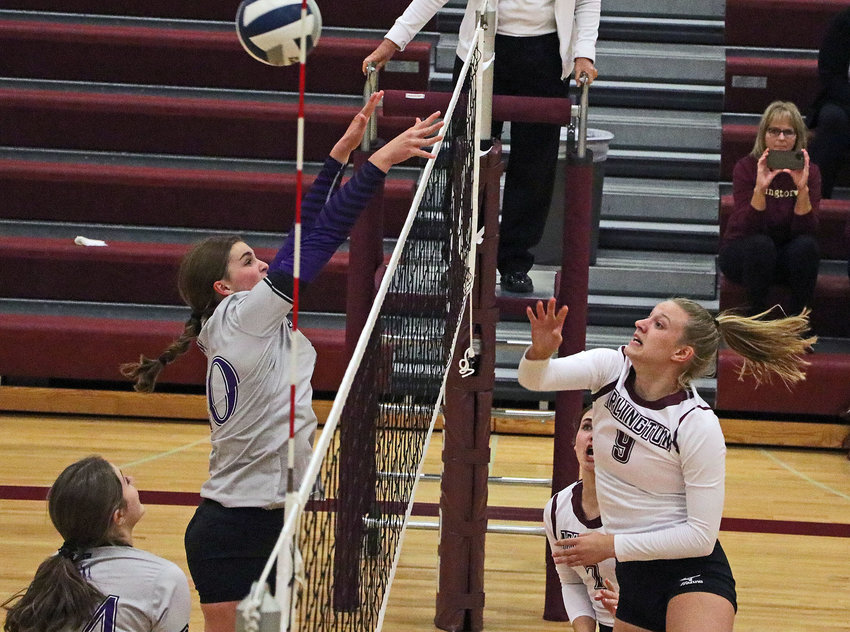 For the third time in less than a week, the Blair volleyball team picked up a victory inside Arlington High School on Thursday.
For the second time, the Bears topped the Eagles themselves. On this occasion — after a 2-0 sweep during the Sept. 24th AHS Invitational — coach Becca Mellema's team won 25-15, 25-11 and 25-14.
“I think we all just played loose and relaxed,” BHS sophomore Taylor Mostek said. “And when we do that, we have a lot of fun and we hype each other up.”
AHS led the first set 2-1 on Taylor Arp's kill, but trailed from there. Peyton Ogle spiked the ball to the back line for a 24-12 Blair lead before the Eagles hit long for the set-ending point.
AHS struggled to score at times during the first and Bears coaches credited libero Savanah Roan with strong play all night. The defensive specialist said her team communicated well in victory.
“If we don't have communication, we get very down on ourselves,” she said. “So, when we communicate, we do very well.”
BHS was strong offensively, too, building a 21-9 second-set lead when Mostek's serve went unreturned. From there, senior Ellia Klanderud registered a pair of left-handed kills for a 23-11 advantage.
“I think our defense could definitely use some work,” Arlington's Peyton Timm said. “They had some big girls and our team is not the tallest — you can see that from the roster.”
The Eagle had a solution, though.
“Just get to the ball,” the sophomore said. “Pursue the ball. Go for it.”
The Bears moved to set point in the second after Nicki Wendt and Ogle combined for a block on a swing by AHS' Lizzie Meyer. One violation later, the road team won 25-11 and moved ahead 2-0.
The Eagles arguably had their most success during the set in which Blair clinched its 3-0 sweep. After Abigail Schlachter went on a BHS serve streak, Timm notched back-to-back service aces over the net and inside the lines to pull her home team within 15-9.
“Confidence is really key,” the Eagle said of serving. “Just saying, 'Over and in,' to myself makes me believe.”
Arlington later cut the Bears' third-set lead to 16-12 on a Timm kill — after an Emme Timm ace, too — but momentum wasn't enough to overcome coach Mellema's team. Hayden Frink-Mathis' block pushed BHS' lead to 20-12 before Hailey Roewert notched an ace and Norah Cloudt's attack went unreturned by the Eagles.
Klanderud later scored match point, beating an Arlington block in the middle of the floor to do it. Her Bears are 7-12 this season. They've won three of their last five matches.
“Our practices have been going very well and I feel like that translates over into our games,” Roan said.
BHS hosts Norris tonight at 6:30 p.m.

Eagles claim first win
Two days after their home loss to the Bears, the Arlington Eagles earned their first win of the season on the road.
Competing at a Raymond Central Tournament, coach Stacy Nelson's team bested Omaha Westview in three sets — 25-20, 23-25 and 25-21. The Wolverines entered the day of matches with five wins during their inaugural season.
Freshman Macy Wolf led the Eagles in victory with eight kills, while Peyton Timm finished with five aces. Meyer had five kills and 18 digs, too.
“We served well and played amazing defense,” Nelson said. “That defensive charge was led by Lizzie.”
Arlington beat Westview after dropping tournament matches to both Seward (25-8, 25-10) and the host Mustangs (25-11, 25-20). The Eagles are 1-21 this fall with three total set wins, including the two earned against the Wolverines.