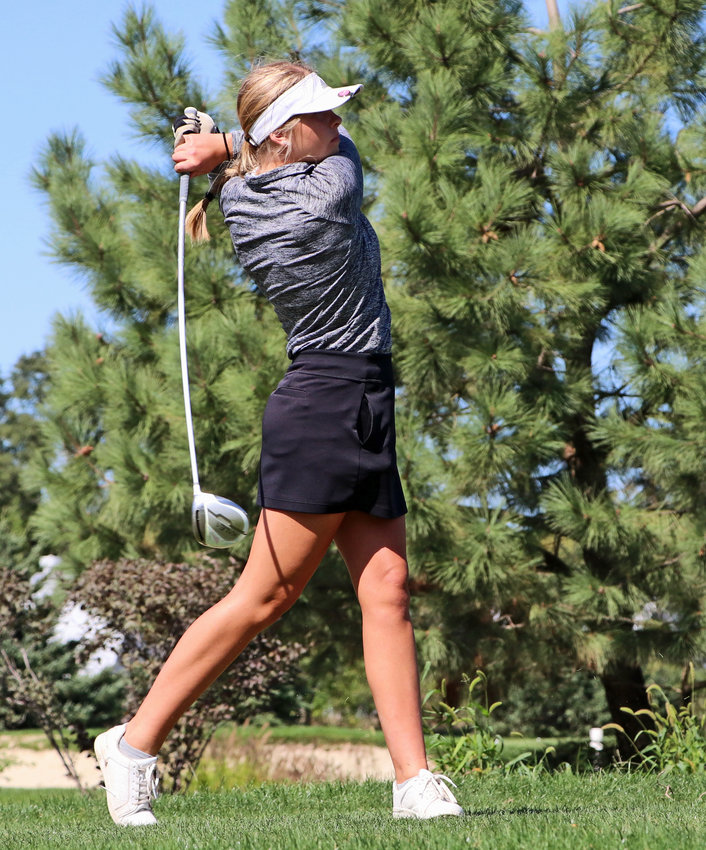 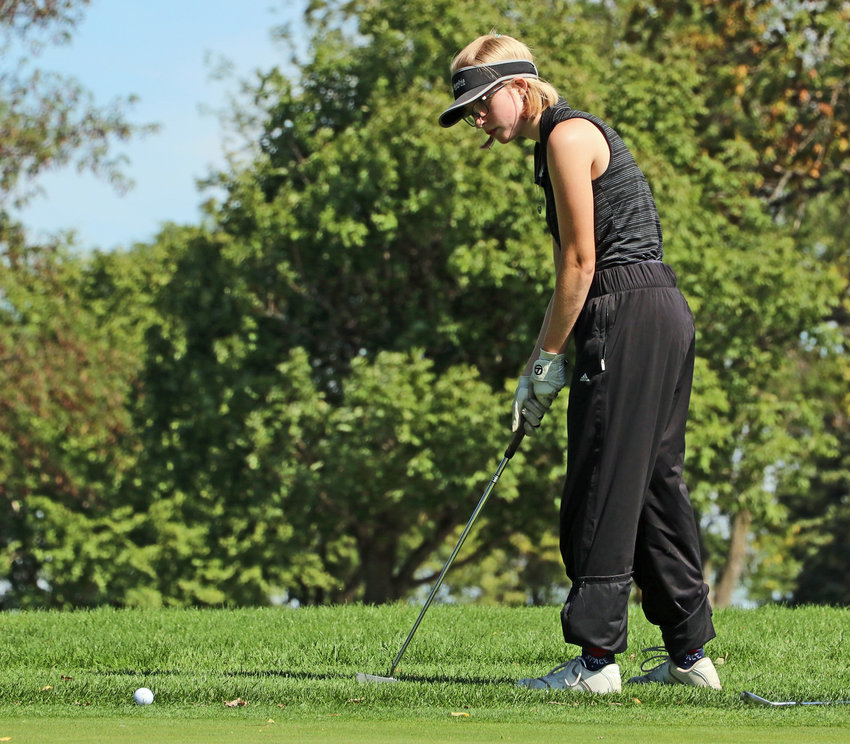 Arlington's Sarah Rhea putts off of the No. 9 fringe Tuesday at Fremont Golf Club.
Grant Egger 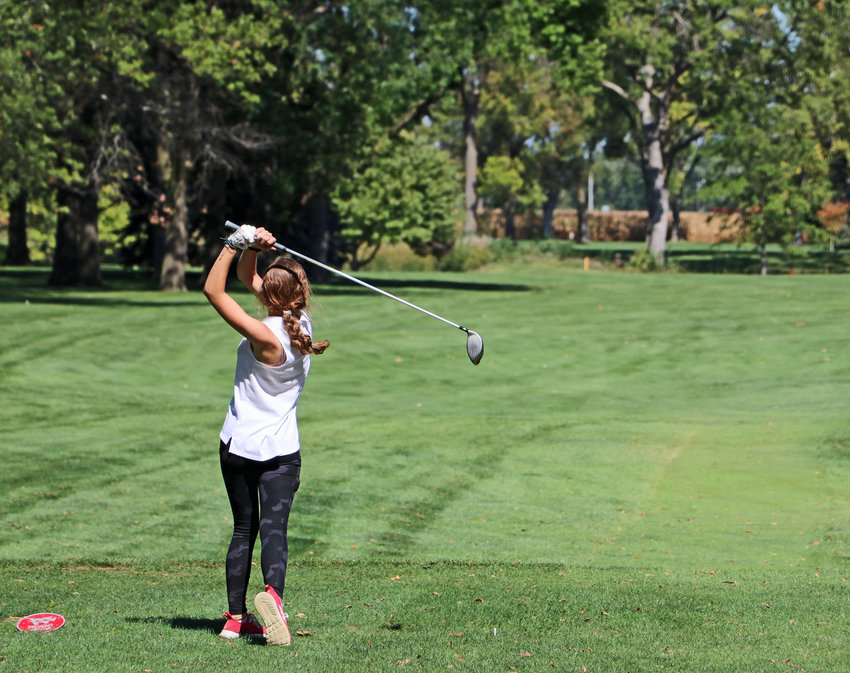 Blair's Emma Wilson hits off of the tee on No. 9 Tuesday at Fremont Golf Club.
Grant Egger 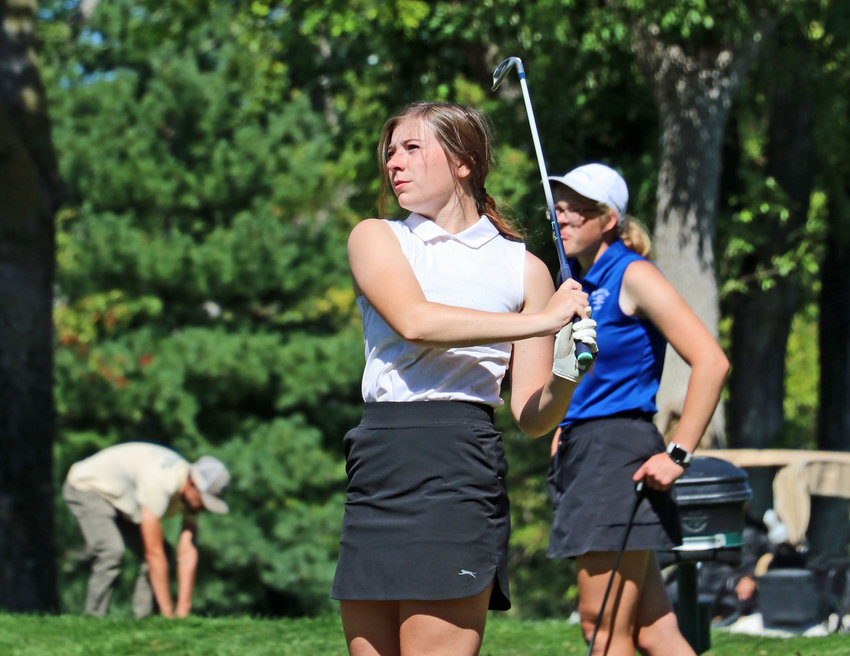 The Arlington Eagles were gifted a pleasant day to host an invitational tournament Tuesday at Fremont Golf Club.
“It was great fall weather,” coach Jason Wiese said. “The sun was out. We had cool temperatures and a nice breeze out there.”
The high school golfers responded accordingly.
“The girls did a great job handing the temperature and the conditions,” the coach added.
Ashland-Greenwood won the team title by one stroke, besting second-place Blair 453 to 454 over 18 holes. Arlington did not post a team score, while West Point-Beemer's Brooke Diekemper shot a 91 for individual honors.
Anna Moore led the Bears in fifth place with her 108 swings, carding just three on the 115-yard 17th hole. Her tee shot split the sand traps in front of the hole and settled on the fringe. From there, the senior took two strokes, sinking a short par putt to close her round.
BHS' Mallory Stirek, meanwhile, finished eighth with 108 swings. Both Carrie Truhlsen and Emma Wilson carded 117s, medaling 14th and 15th, too.
Truhlsen didn't like how the wind affected her play, and was disappointed with her ability to hit the ball straight, but admitted their were positives to her round.
“I met three of my goals,” she said.
The Bear took less than 120 strokes, she didn't lose any golf balls and she didn't take 10 swings on any one hole. Her teammate, Mackenzie Storjohann added an 18-hole 125 to round out coach Ross Udey's varsity rounup.
Kaylie Erwin, meanwhile, led AHS with her 133 swings. Her group easily finished its round first after a shotgun start Tuesday morning.
“We looked at Kaylie's scorecard from last year and, again, she shot, I think, five or six strokes better than she did last year,” Wiese said. “So, what we're always looking for is that continued improvement. It was good to see that she was able to do that.”
The Eagle is Arlington's lone senior.
“She had some great shots today and, as always, we're trying to get that consistency going,” Wiese added.
Sarah Rhea added 150 swings for AHS during its home meet in Fremont. The Eagles were set to compete Thursday at the Elmwood-Murdock quadrangular and next play competitively 10 a.m. Monday back at Grandpa's Woods Golf Course for a tournament.
Blair, meanwhile, plays at Pioneers Golf Course in Lincoln next Tuesday for the Eastern Midlands Conference Tournament.