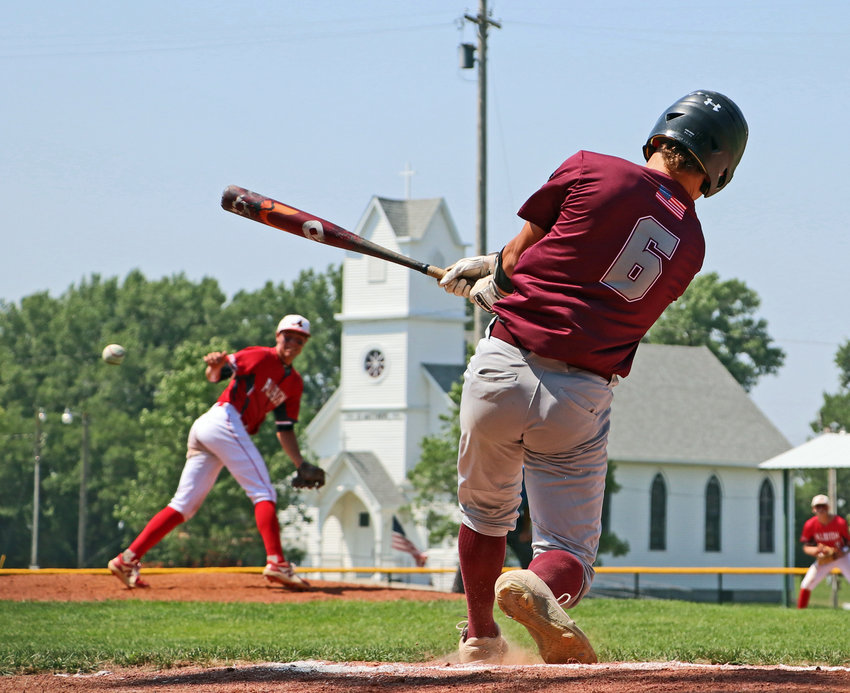 Arlington Senior Legion batter Tanner Pittman puts the ball in play Friday during the Class B Area 3 Tournament in West Point. The Eagles beat Albion in the opener, 8-0.
Grant Egger 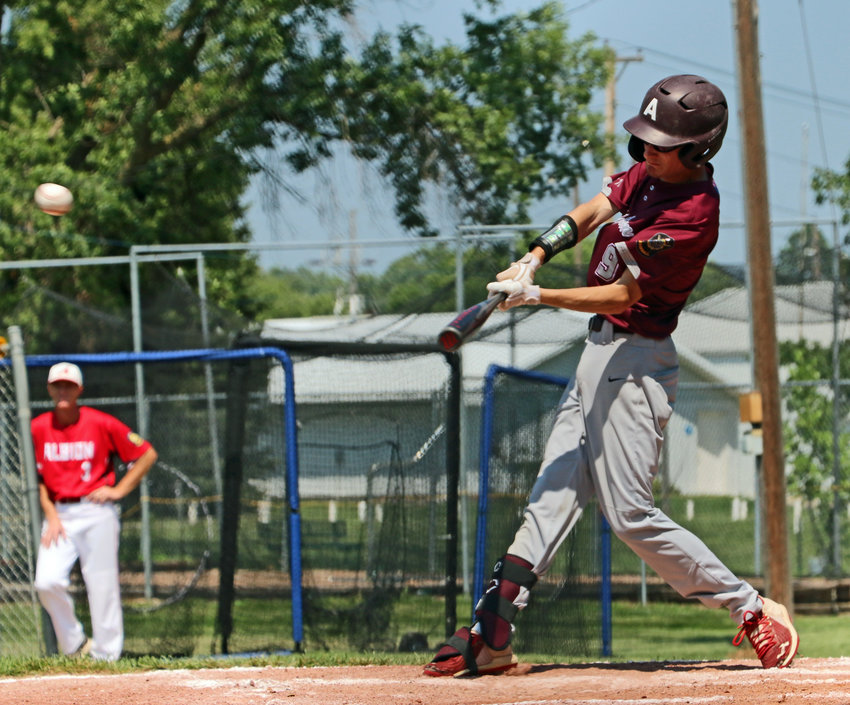 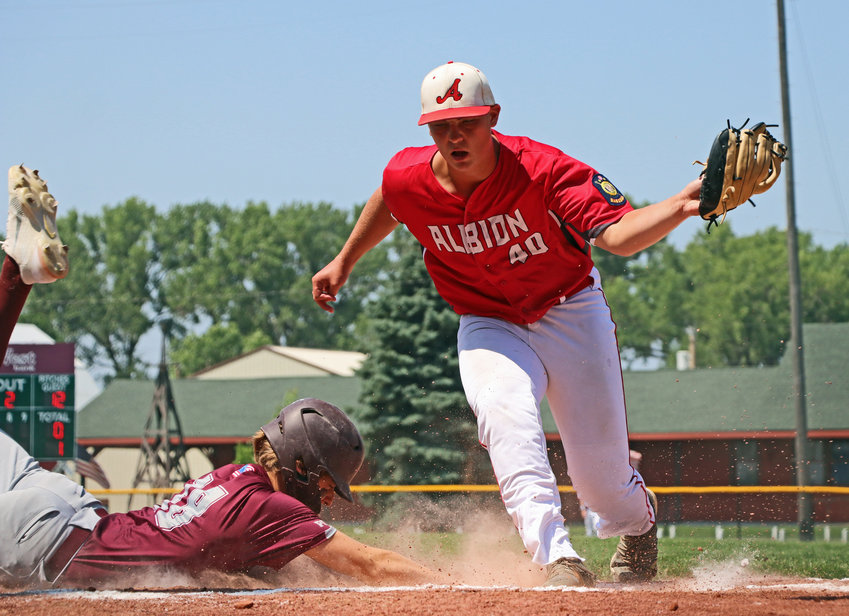 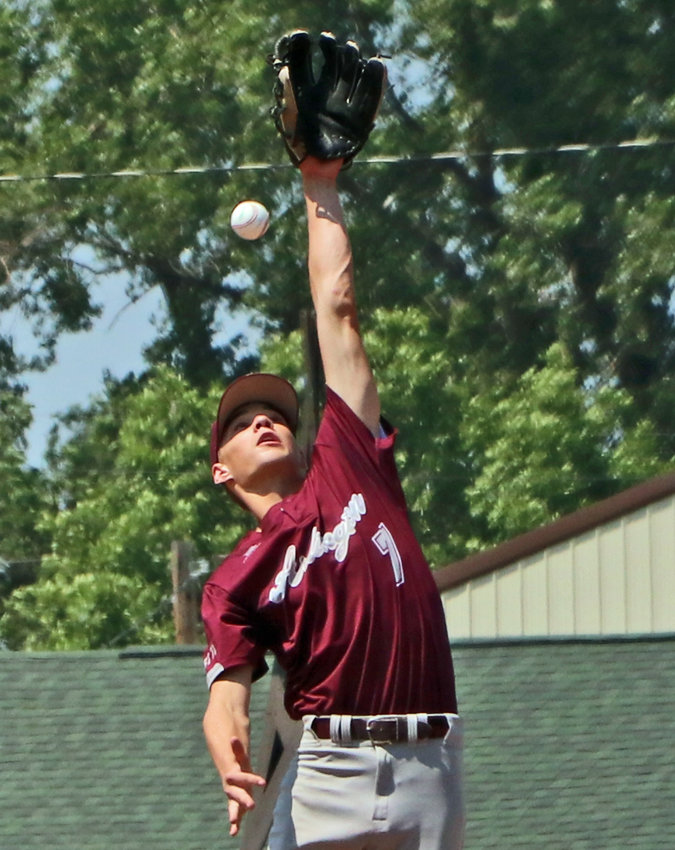 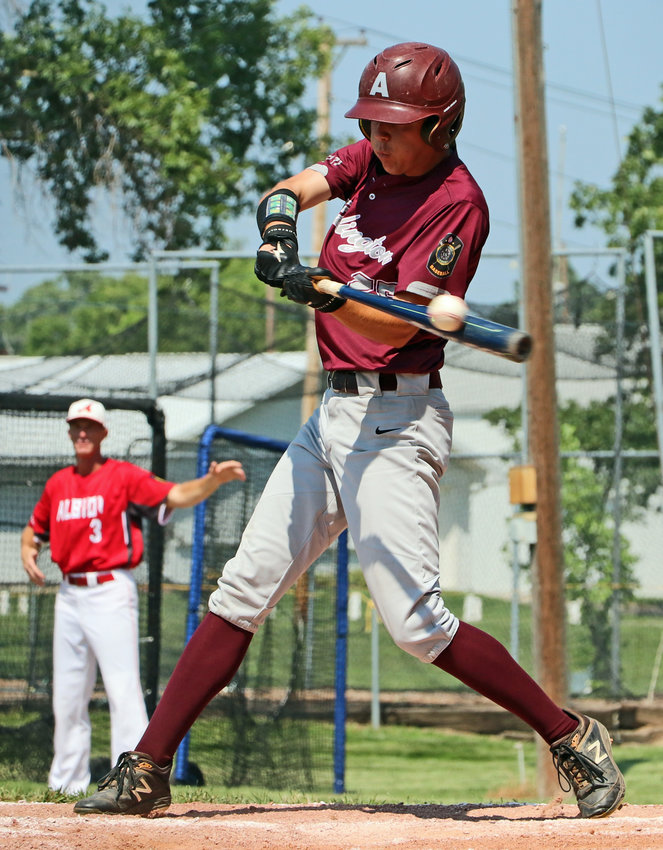 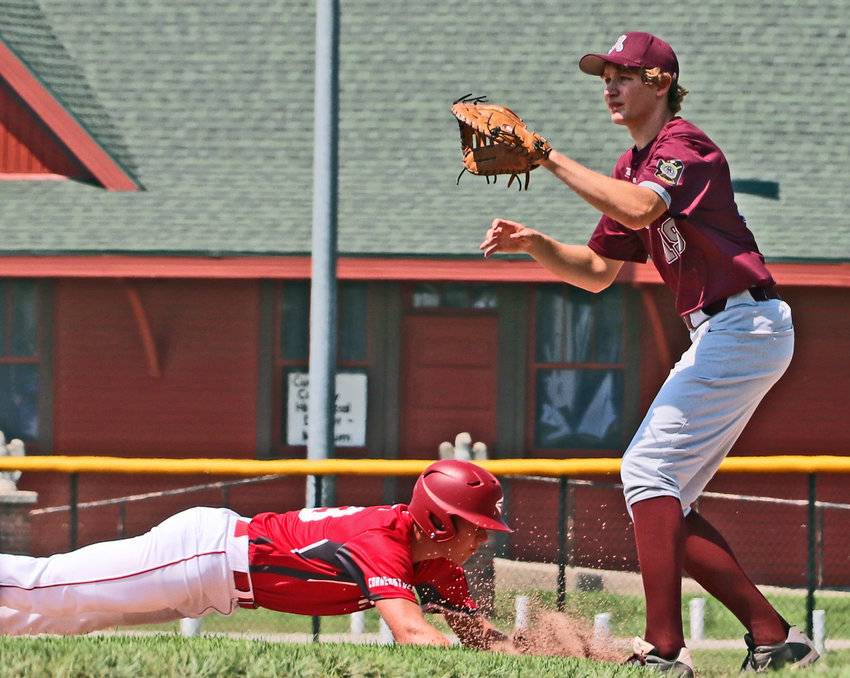 Arlington Senior Legion outfielder Wes Martens had the answers when asked what a team needs to start postseason play strong.
“First of all, pitching is the key to all of it,” he said Friday at the Class B Area 3 Tournament in West Point. Braden Rump started the Eagles off with five shutout innings against Albion in the opener.
“Then, on offense, just put the bat on the ball,” Martens continued. “Keep it out of the air.”
Post 71 manufactured four runs over the first two innings and beat its first-round foe 8-0. With the win, the Eagles advanced into a second round game against their top-seeded hosts. They won that Saturday night battle in five innings, too, 10-2.
Coach Ed Menking's team scored four runs during the first inning against West Point before adding three more in the second for a 7-0 advantage. The Bombers responded with two runs during the bottom half of the second, but they were unable to avoid the run rule just three frames later.
Logan Kaup highlighted the Eagles' effort at the plate, going 2-for-3 with a double and two RBIs. Rump added two hits, two walks and two runs scored, too.
Dustin Kirk, meanwhile, earned the Post 71 pitching win with five strikeouts over 4 2/3 innings. Relief pitcher Barrett Nielsen stepped in during the fifth and notched the final out of the ballgame.
The win pushed the Eagles into a third-round game with Waterloo-Valley, but it was the opener that provided the proper jumpstart to a team hoping to win its bracket and reach the state tournament.
“It felt nice to get the win,” Martens said. “I'll say that if pitching keeps up, and we keep hitting the ball on the ground and keep it out of the air, I think we'll be just fine.”
The Arlington defense recorded the first of its two double plays against Albion during the top of the first inning. Then, during the bottom half, it notched its first two runs.
Nick Smith's triple put the Eagles ahead 1-0 before his courtesy runner, Josh Iossi, scored on a passed ball.
Ahead 2-0, Post 71 scored run Nos. 3 and 4 on swings by Martens and Rump.
“I'm not really surprised at all,” shortstop Tanner Pittman said. “We've got dudes that can hit the ball, top to bottom — one through nine.”
Martens' single was a confidence-booster.
“It made me feel really good because I've struggled quite a bit this year at the plate,” he said. “So, just putting the bat on the ball and putting it somewhere kind of gets you moving.”
The 4-0 advantage held with Rump on the mound. He finished off Albion during the top half of the fifth inning with back-to-back flyouts after four strikeouts during the first four frames.
With future tournament games in mind, the left-hander also kept his pitch count in line.
“I got to 60 and the clubhouse feeling was, 'We need to score four right here and kind of end it,'” Rump said. “That's exactly what we did and I was really excited. Now, I can come back Monday instead of Tuesday.”
The Eagles' four-run fifth-frame ended Friday's Area 3 opener early. Smith and Aiden Foreman knocked in runs before Josh Miller's two-score knock capped the game at 8-0. The Post 71 dugout teased Kaden Pittman at second base to make sure he scored on a Miller hit and the baserunner did just that.
The hot Arlington bats were exactly what the team had hoped for in West Point.
“You've got to do it right at the end,” Rump said. “We're just going to ride that train all the way. Hopefully, to Crete.”
Up-to-date Legion district tournament coverage can be found online at enterprisepub.com/sports. Further results will be published in Friday's Arlington Citizen and the Washington County Enterprise.