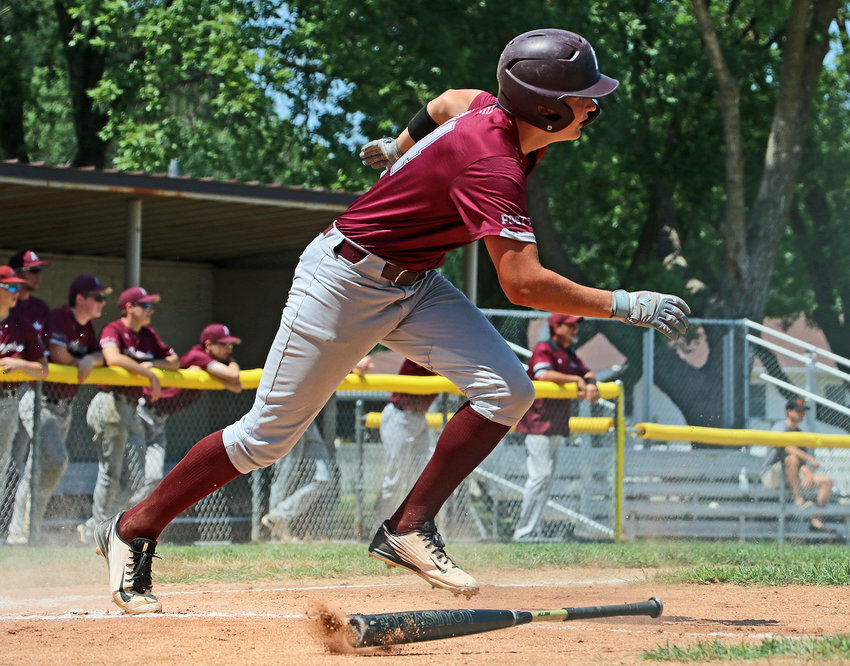 Arlington batter Kaden Pittman takes off toward first base after making contact Friday against Springfield at Vets Field.
Grant Egger 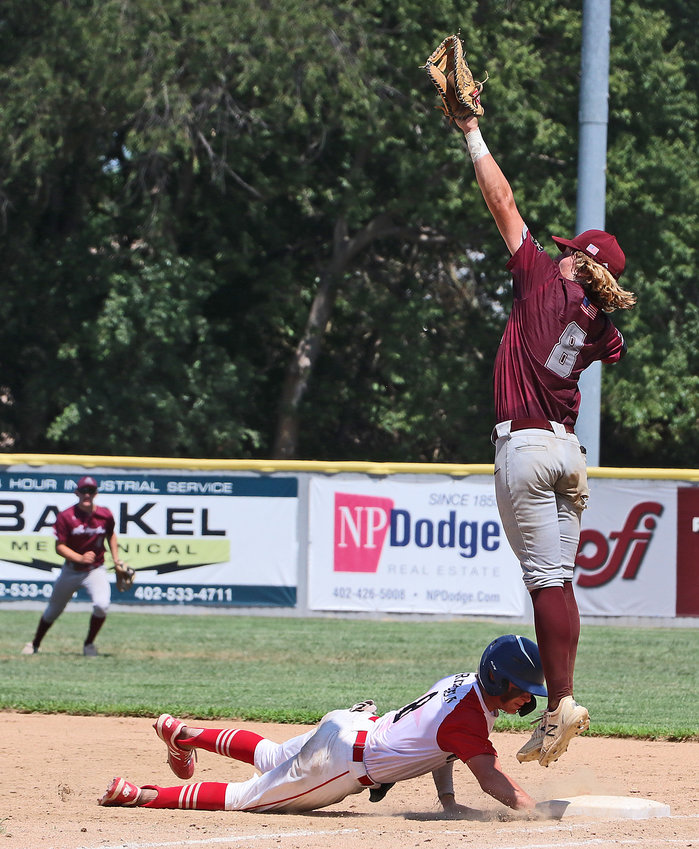 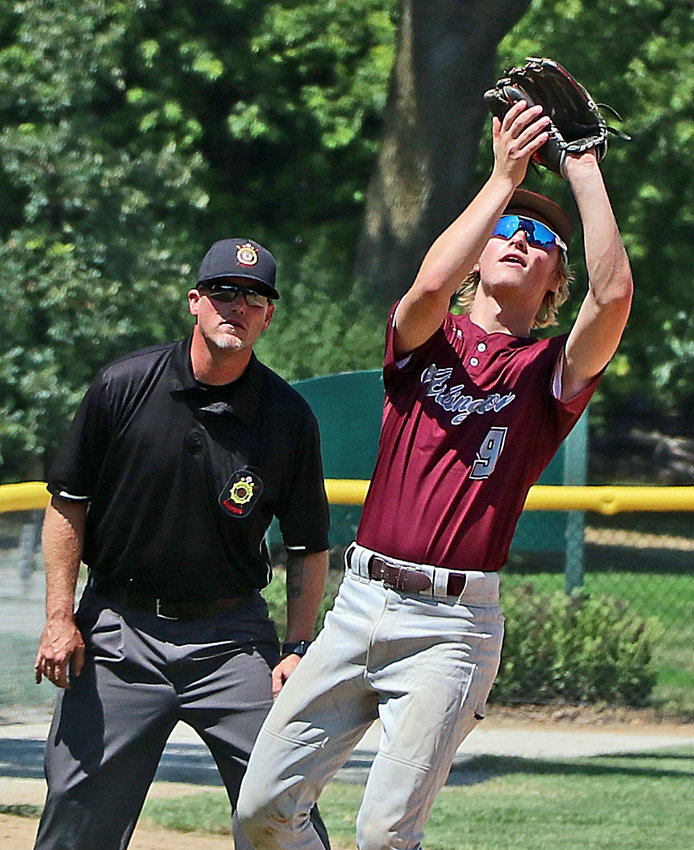 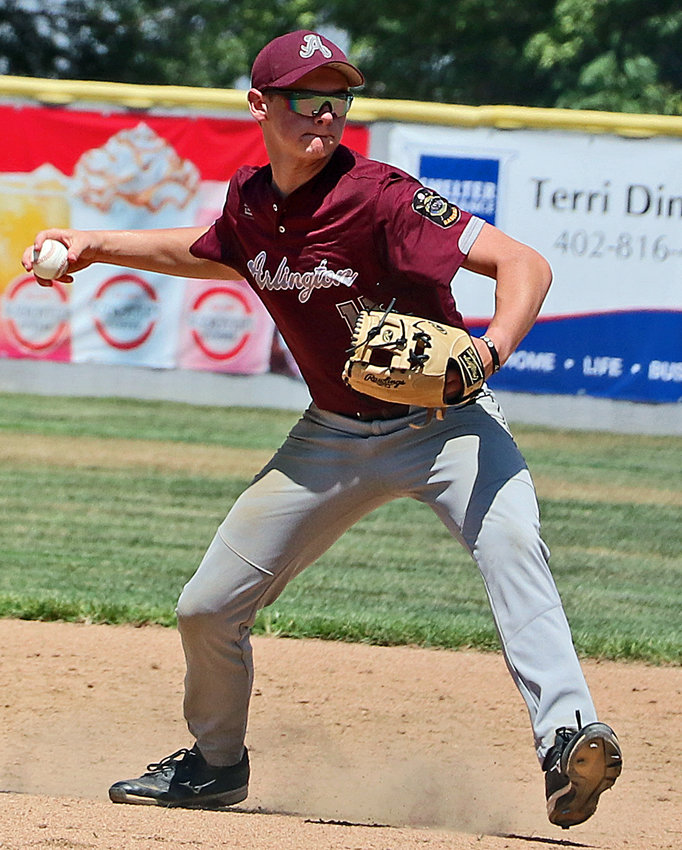 Arlington infielder Dalton Newcomer throws the ball to first base for an out Friday at Vets Field.
Grant Egger 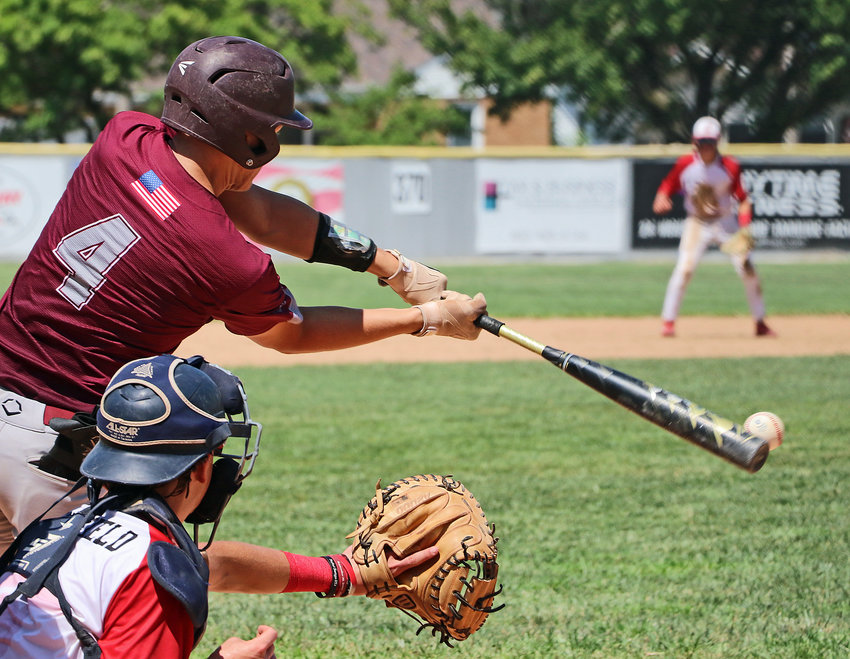 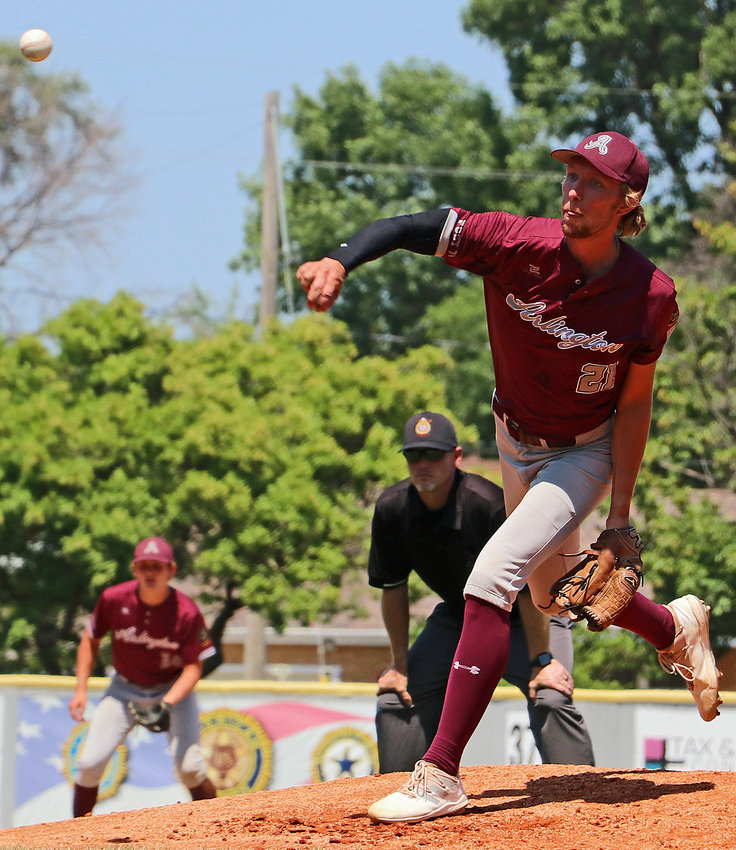 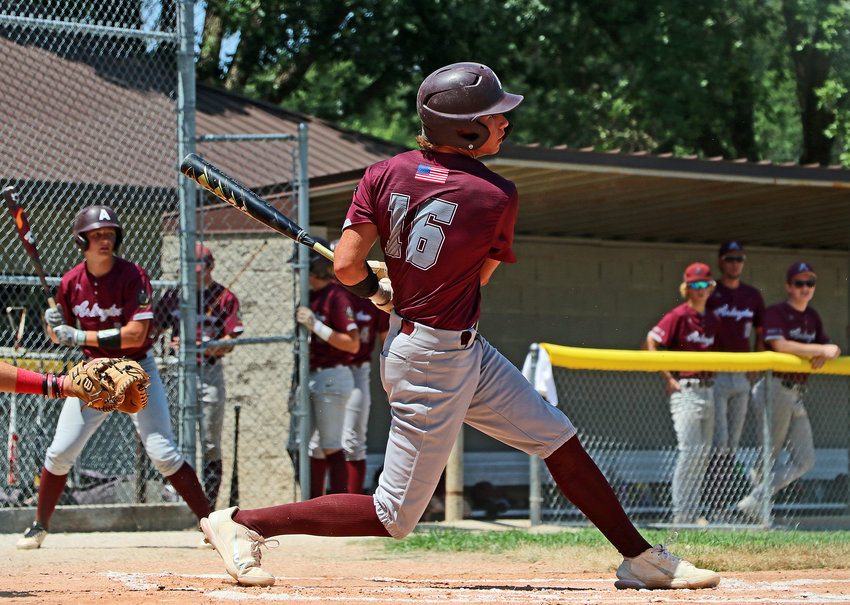 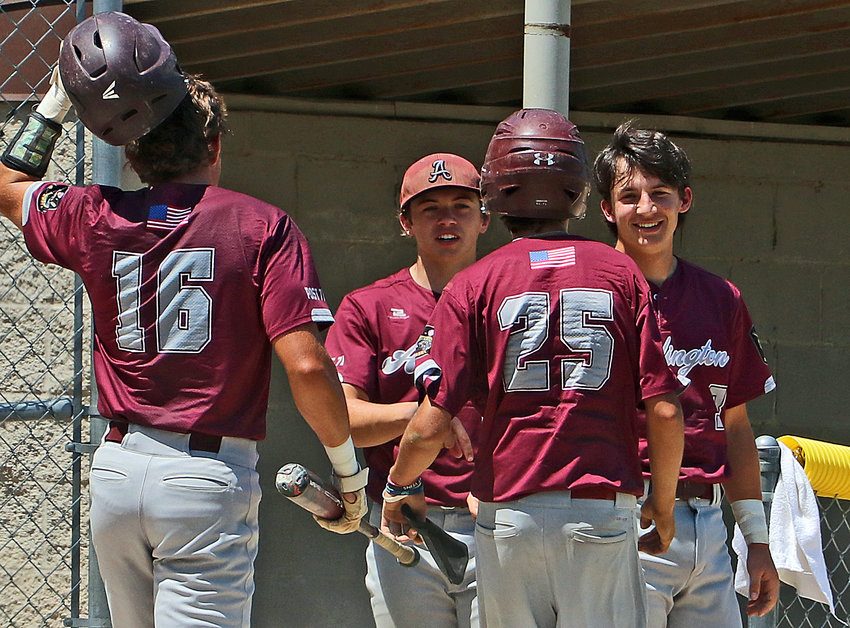 The Arlington Senior Legion baseball team started the Class B Area 3 Tournament in Blair with a five-run victory.
The Post 71 Eagles scored three first-inning runs against Springfield and never trailed, setting up a second-round matchup with the No. 1 seed. Nick Smith and his teammates are quite familiar with Waterloo-Valley.
“We've seen them a hundred times,” the first-baseman said Friday. “So, we're, basically, just going to go out there and play our game. Hopefully it's similar to this game.”
It was.
Coach Ed Menking's squad broke open a 1-1 ballgame with a five-run top of the third inning, taking a commanding lead and maintaining it for a 9-3 Saturday evening victory.
“We were warmed up a little bit and this was their first game,” Arlington's Dalton Newcomer said. “I think playing yesterday in the heat helped us a little bit.”
While Waterloo-Valley dropped to 0-1 in tournament play, the Eagles advanced to Sunday's bracket play with two wins under their belt. Updates can be found online at enterprisepub.com/sports.
In Saturday's victory, Post 71 had four players notch RBIs during game-changing third frame. Kaden Pittman notched a two-RBI single with the bases loaded before Smith and Newcomer knocked in a run apiece over the next two at-bats.
Barrett Nielsen then brought Arlington's lead to 6-1 with a bases-loaded walk.
“We've had a lot of people contribute,” Newcomer said.
Smith added a two-RBI single during the fourth inning and Trevor Denker plated the ninth Eagles run with a single in the sixth.
Defensively, Zach Vanek threw five innings — working his fastball and change-up — and earned the win.
“That's exactly what I wanted. Had a solid defense behind me,” he said. “We got some runs put together early that helped build some confidence there, so it was a really good team win. Hope to keep doing that.”
Newcomer had similar feelings about Post 71's 2-0 start.
“We've been hitting the ball really well,” he said. “We just need to keep it up.”

Arlington bats produce in opener
The Eagles were more consistent at the plate Friday against Springfield than they have been all season.
Smith admitted it after Arlington's 9-4 win at Vets Field.
“Today, I guess, we just came out and decided to be a different team, pretty much, and just hit the ball,” he said. “A lot.”
Coach Menking's team scored runs in all but two innings against the Trojans, including three during the first frame.
“It feels good to be able to score first,” outfielder Wes Martens said. “It puts the pressure on them to make plays.”
Catcher Braden Monke did his job in the lead-off spot, taking first base after he was hit by a pitch to start the game.
“That was twice last game and once this game,” he said, grinning. “That one was in the same spot as last time, too.”
Arlington's Logan Kaup then singled to right field before Pittman hammered a two-RBI double to the gap in right-centerfield for a 2-0 advantage. Jack Bang added a sacrifice swing later in the inning as the Eagles jumped out to a lead they wouldn't relinquish.
“We put the ball in the play the first inning and scored runs,” Martens said. “Forced them to make some hitting plays.”
Springfield finally did during the third frame, scoring two runs, but not before Post 71 posted its fourth run on a Newcomer RBI double to left-centerfield.
“When you see those balls hit right-center or left-center and you see them hit grass, it's just pretty exciting to be in the dugout,” Smith said.
Pittman hit into an error for two more runs during the top half of the fourth inning before Martens hit an RBI single in the fifth for a 7-4 advantage. Bang slid in safe on a close play at home plate for the three-run lead.
“First pitch, didn't like it. Swung and didn't like it,” Martens explained. “Second pitch, hit off my ankle. And, then, after a two-strike count you just kind of step out of the box and just relax. Take your time and know that you can do it.”
Though Springfield's run-scoring for the day was done, Smith added his own two-run hit to the gap in the sixth. The five-run victory was credited to Nielsen, who threw six innings in the afternoon heat before Bang relieved him in the seventh.
The Eagles led throughout and won in the end.
“It felt good,” Monke said. “We don't do that very often it seems like.”