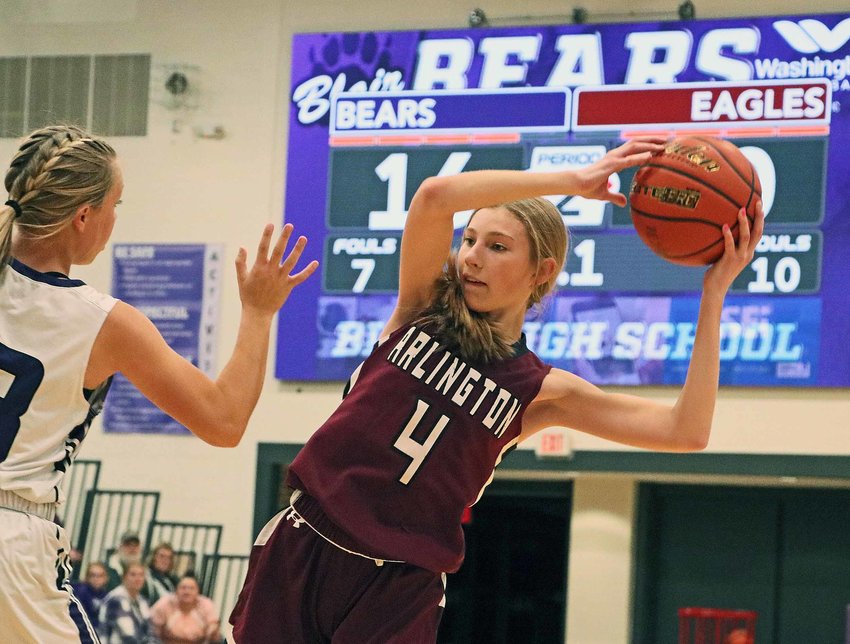 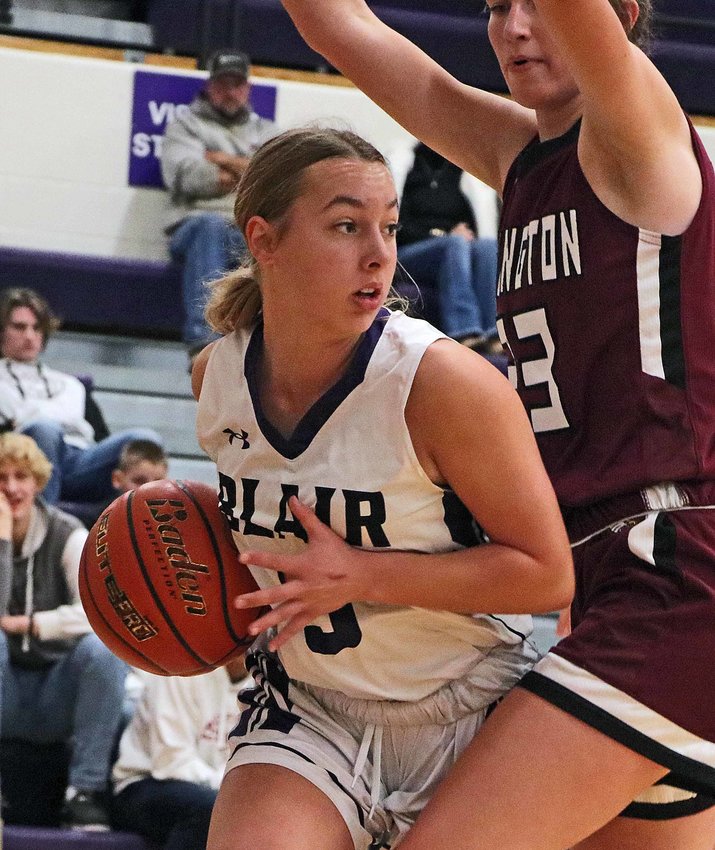 The Bears' Claire Anderson, left, is closely guarded on the baseline by Arlington's Britt Nielsen on Monday at Blair High School.
Grant Egger 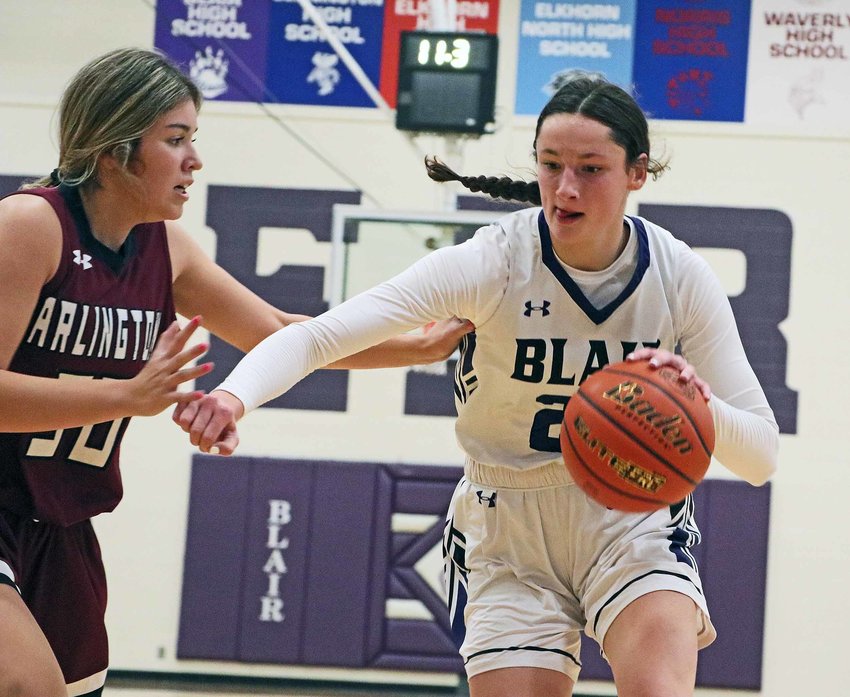 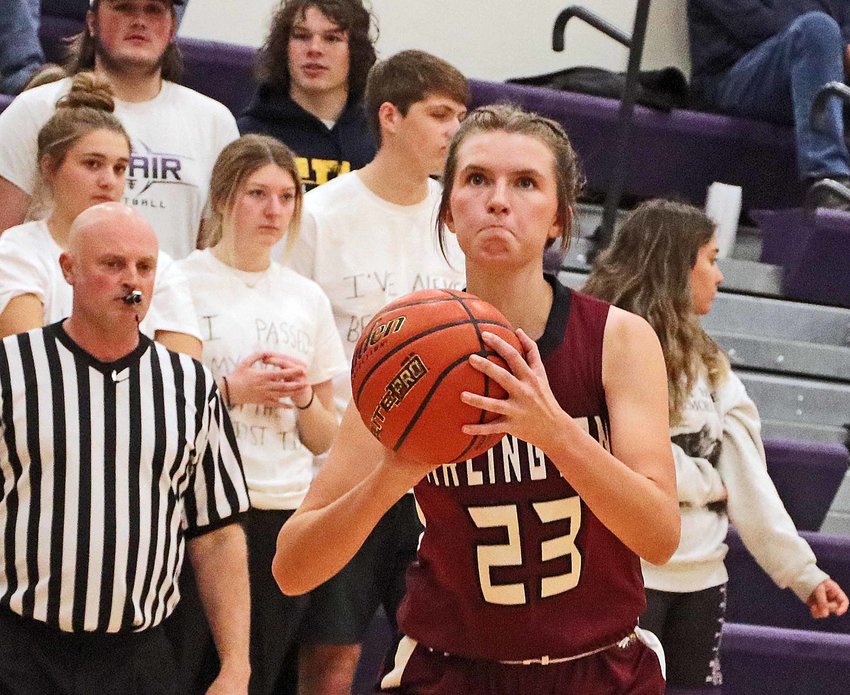 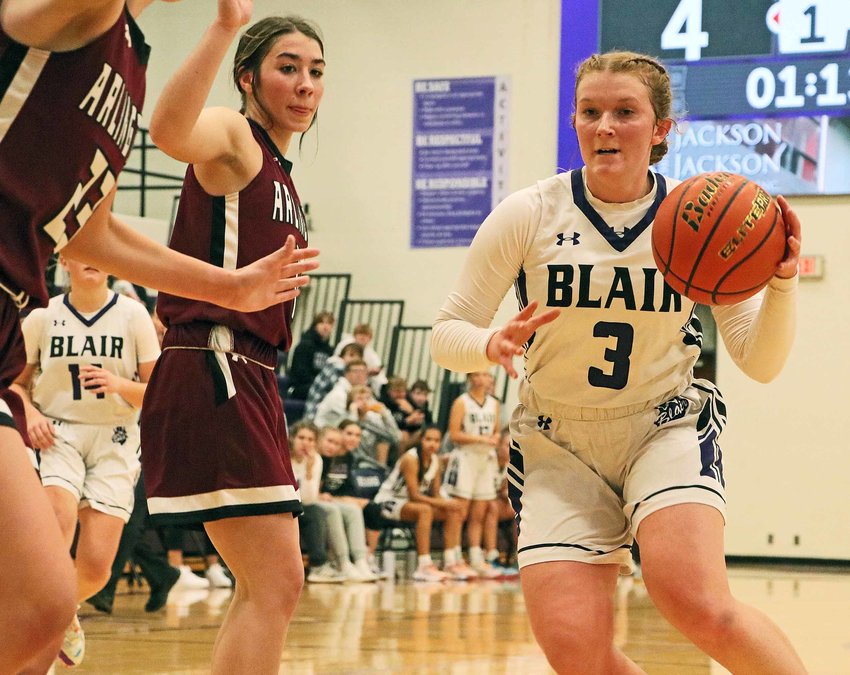 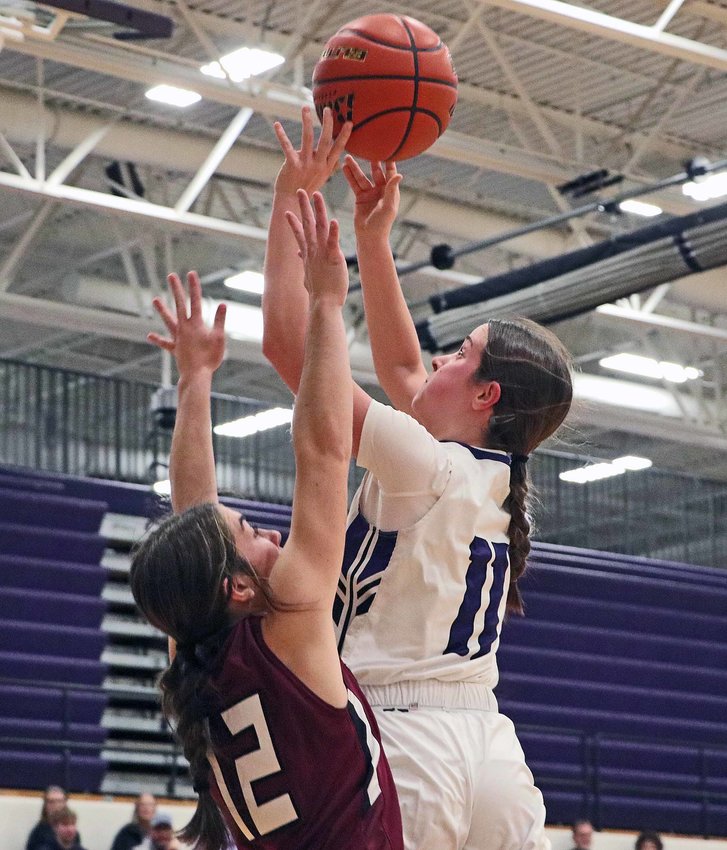 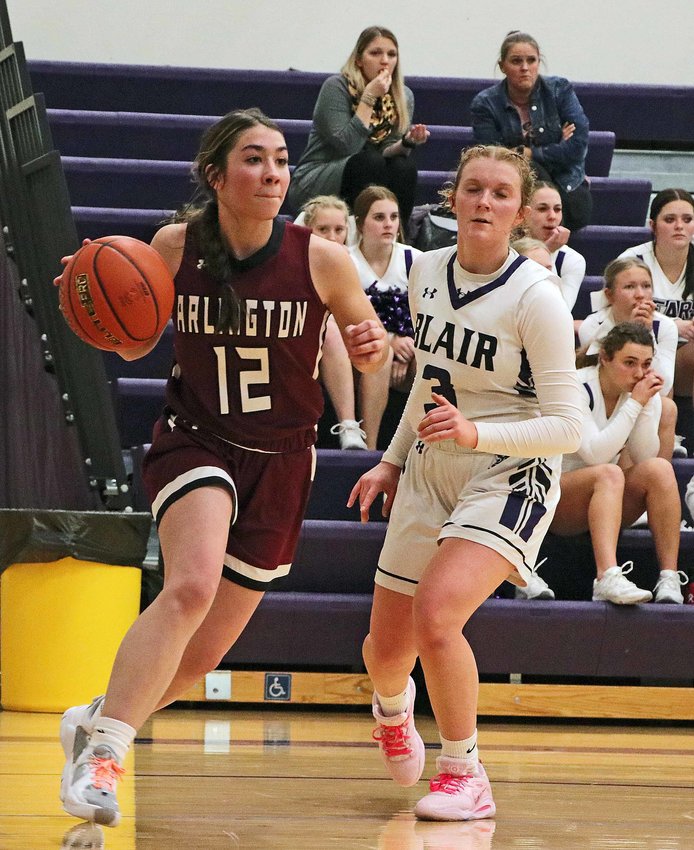 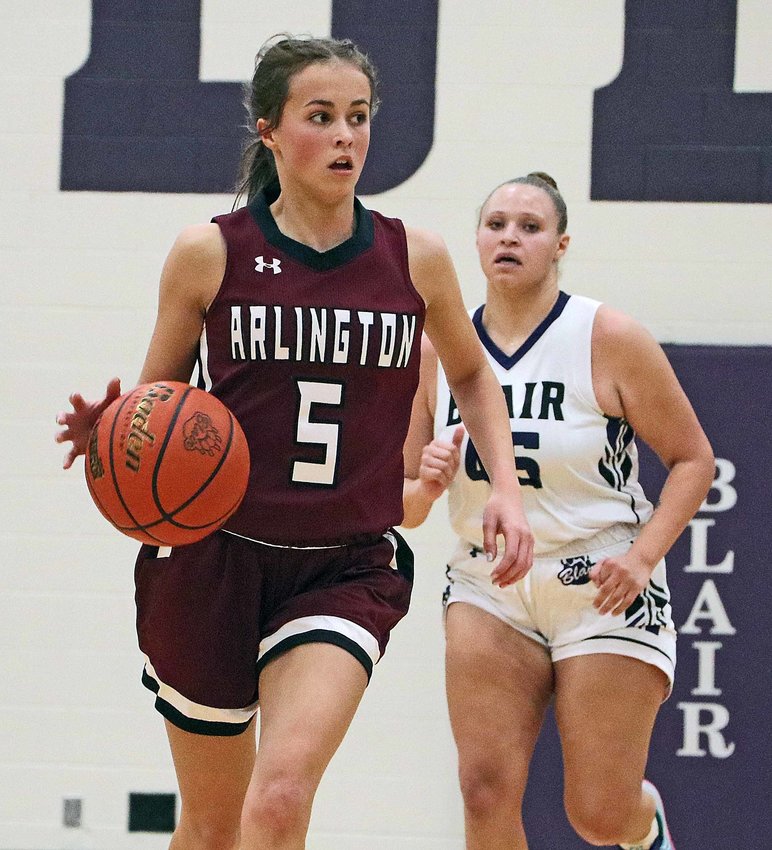 Led by a freshman point guard and a sophomore leading scorer, the Arlington girls basketball team previewed its upcoming season Monday with a 44-37 Jamboree exhibition win at Blair High School.
Second-year player Britt Nielsen scored an Eagles-best 14 points in coach Luke Brenn's lineup, while Emme Timm scored seven in addition to her ballhandling duties.
The Bears, reshaping their roster after the graduation and transfer of key contributors from last season's state tournament team, were led by sophomore Addie Sullivan's 13 points. The forward made five of BHS' eight 2-point buckets, while junior Leah Chance scored 11 points with an 8-for-10 performance from the foul line.
Both Brenn and Blair coach Matt Aschoff now move forward to their Washington County teams' official season openers. Arlington hosts West Point-Beemer next Thursday, while the Bears play at home against Omaha Mercy that same night.

Eagles display growth
Monday's win won't go toward AHS' season record, but the exhibition game certainty did matter to Brenn's squad.
“They don't count, but it's a lot for our girls considering how young we are, OK?” the coach said. “It only helps our confidence.”
The Eagles went 7-17 overall a season ago, and return just three players who scored points during their 1-1 subdistrict tournament stint. Junior Taylor Arp, sophomore Libby Hegemann — who tallied eight points against Blair — and Nielsen have the most experience on Arlington's new roster with Nielsen returning as its most prolific scorer.
“She knows where the hole is, and she likes to score like everybody else,” Brenn said. “She's coming along.”
Timm and ninth-grade classmate Macy Wolf proved themselves fit to start alongside their elder classmates Monday, too. The point guard played facilitator, while the 5-foot-11 Wolf displayed an ability to score with 10 first-half points against the Bears.
“Granted they made some freshman mistakes — everyone has mistakes — I thought they played really well,” Brenn said. “You can just tell that they have played a lot of basketball.”
Altogether, the coach was visibly pleased with the Eagles' showing after just a week's worth of practice. He smiled as he recapped one of their most-telling accomplishments of the night.
“We hadn't run much zone offense and (Blair) went zone in the first half,” he explained. “I just drew a zone offense up and they went out and executed pretty well.”
To Brenn, it indicates a team on its way up.
“That's a sign that they're growing and starting to understand the game of basketball a little bit,” he said.
AHS' opener against West Point-Beemer tips off at 6 p.m. Thursday.

BHS aims to replace scoring
Blair closed out its most successful season in 24 years last March with an 18-point first-round state tournament loss to Omaha Skutt.
The Bears scored 50 points in defeat and return just four of those points to this season's roster. They must replace the scoring they lost and have work to do as evidenced by Monday's exhibition game with Arlington.
“We talked to the girls about shot selection and we did miss a ton of free throws, which hurt us,” Aschoff said after the Jamboree matchup.
Chance and Sullivan are BHS' returning starters. They combined for 24 of Monday's 37 points, leading an overall inexperienced roster.
“Addie does a really good job. She's got the experience from last year,” Aschoff said, mentioning several young players he expects to contribute this winter including freshmen Kate Wulf and Claire Anderson. “Hayden (Frink-Mathis) has stepped up a little bit. She's got to keep being strong with the ball, but she had a good week in practice.”
Veteran senior guard Kaitlyn Johnson, however, arguably spent the most time with the ball against the Eagles. She's likely to fill a key role this season.
“Kaitlyn has just kind of played that her whole life,” Aschoff said, noting her work both as a varsity substitute and a junior varsity standout. “She's worked really hard at it, and she's going to have her bumps and bruises being the point and playing at the varsity level.”
Junior Sophia Wrich will garner playing time once she returns from injury, too, but Johnson started Monday alongside Allison Hernandez, Joslyn Policky, Chance and Sullivan. Their teammates and they now have a few more practices to work together before their 7 p.m. home opener against Mercy.
“We watched the ball a lot tonight, whether it was on defense or offense, which isn't good,” Aschoff said. “We have to move better on the offensive end and we've got to move better on the defensive end.”