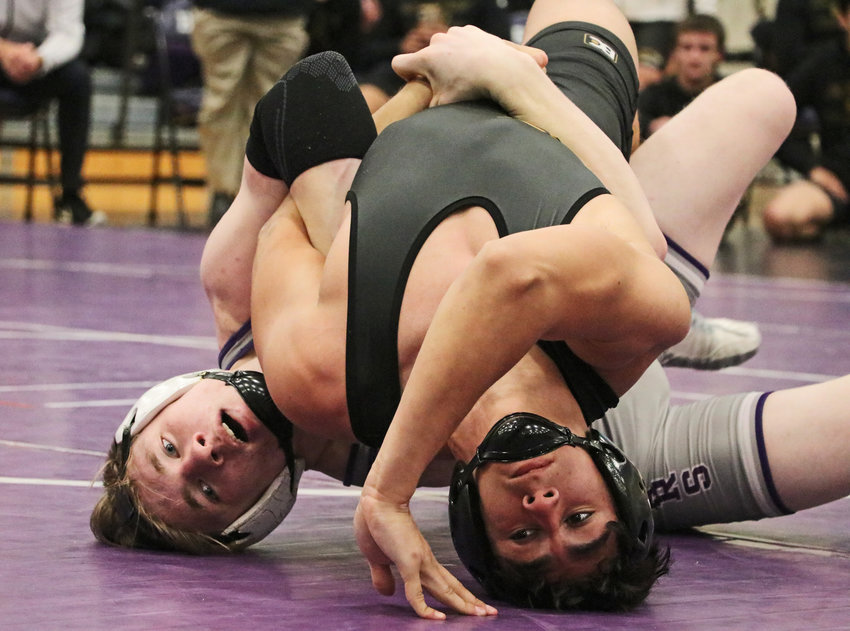 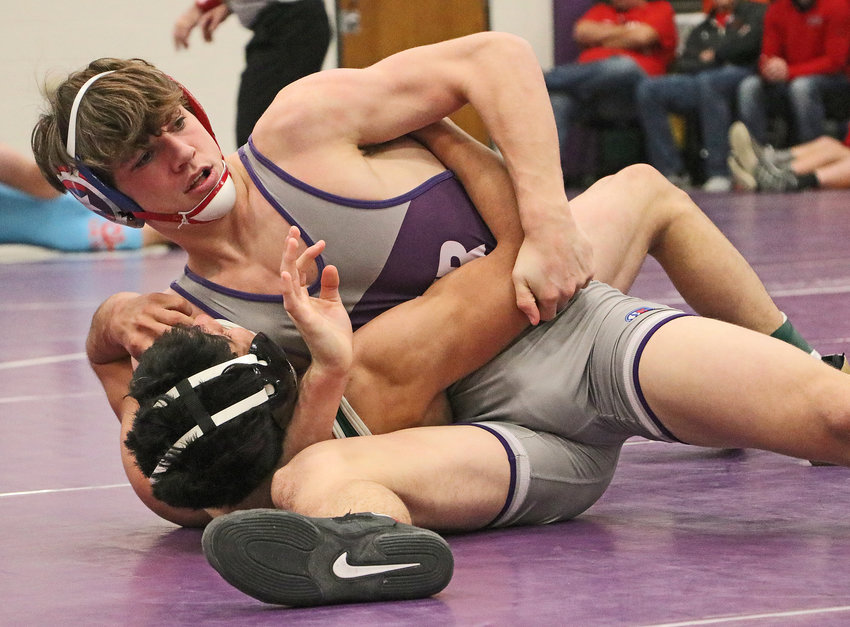 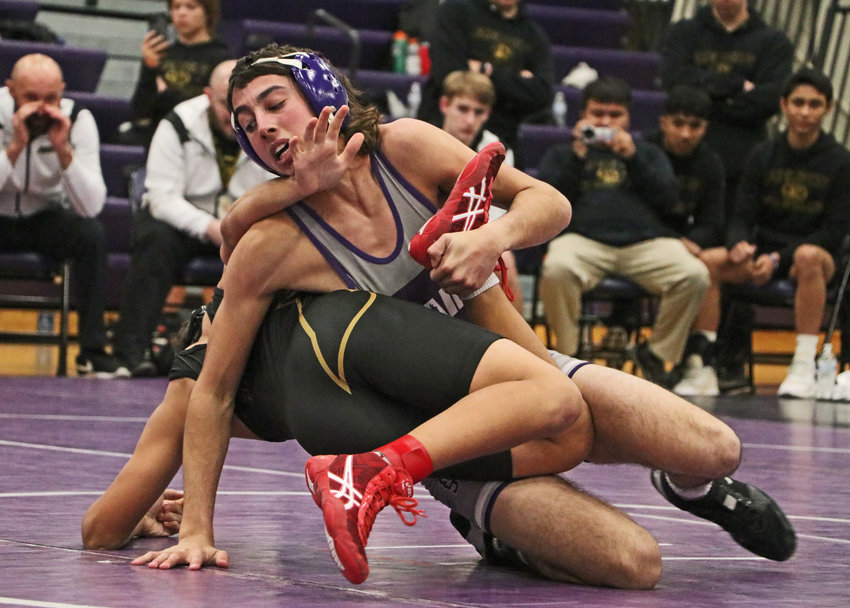 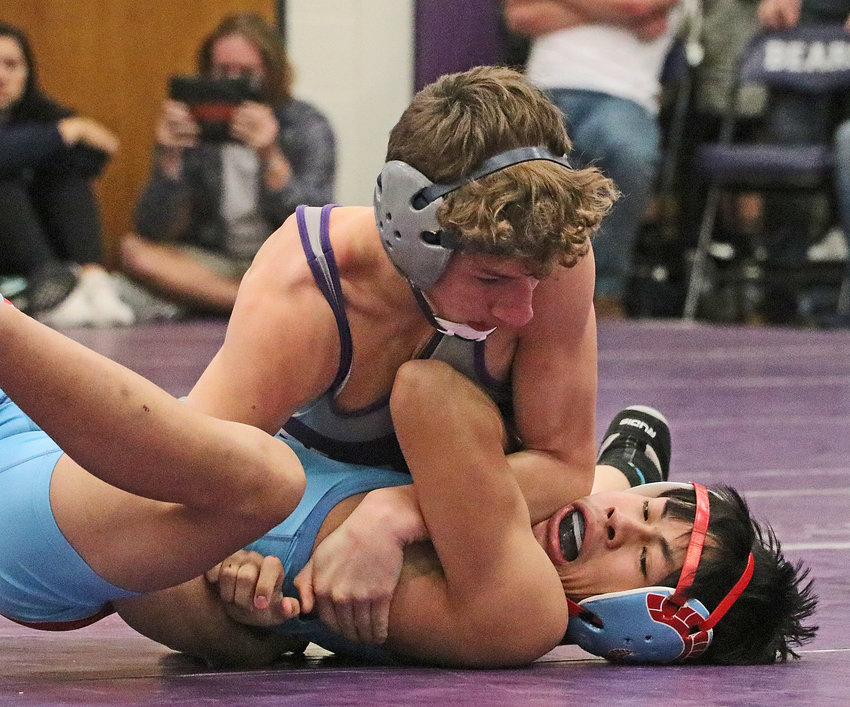 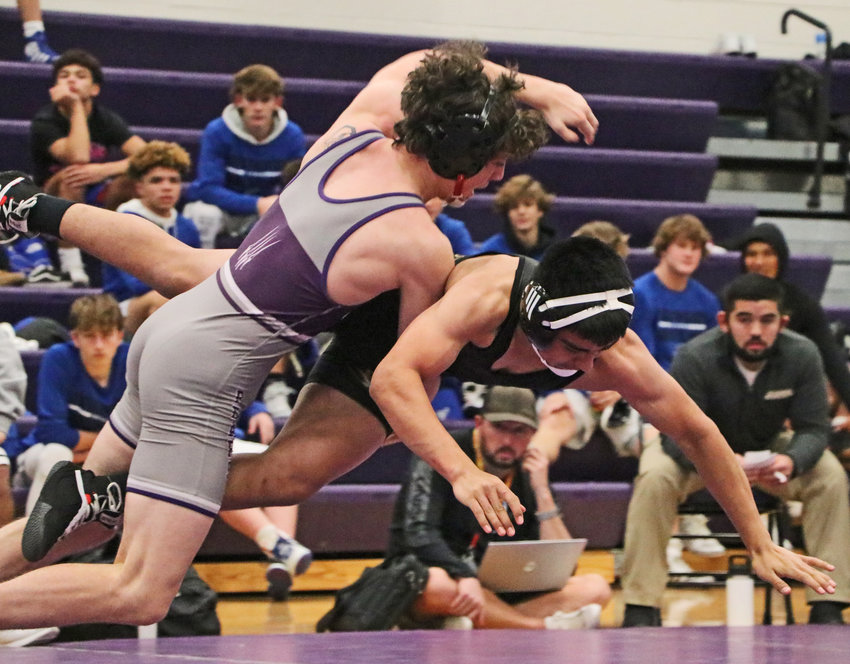 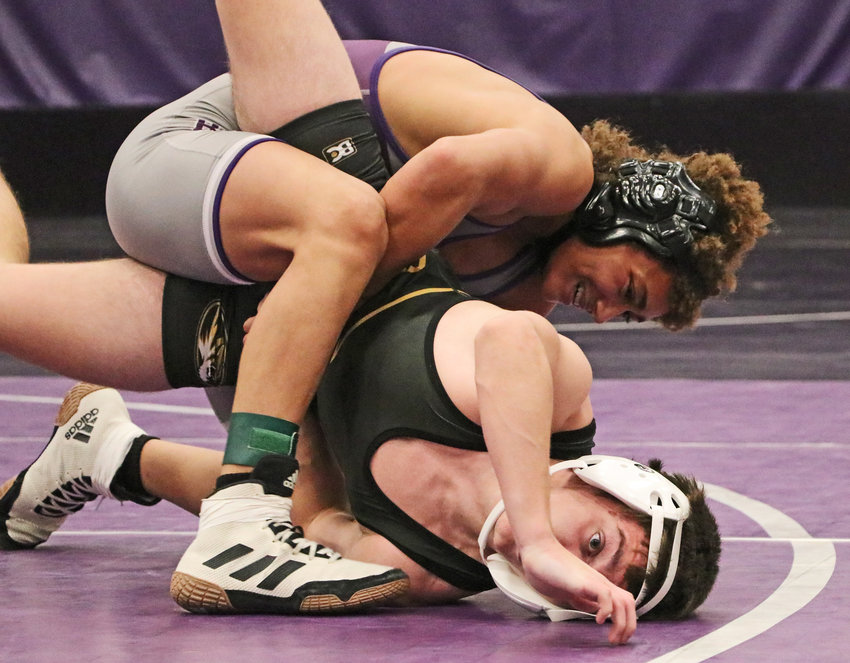 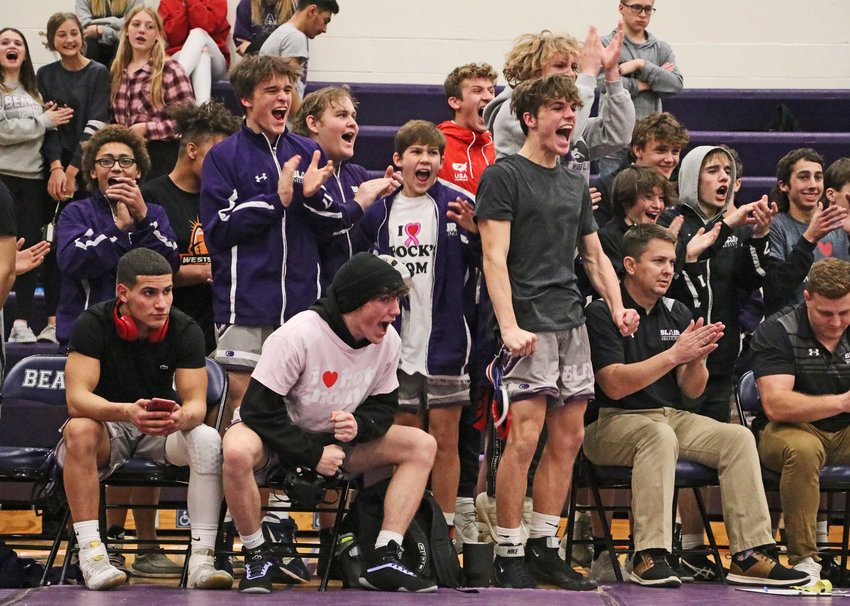 Bears react to a teammate's win on the mat Thursday at Blair High School.
Grant Egger 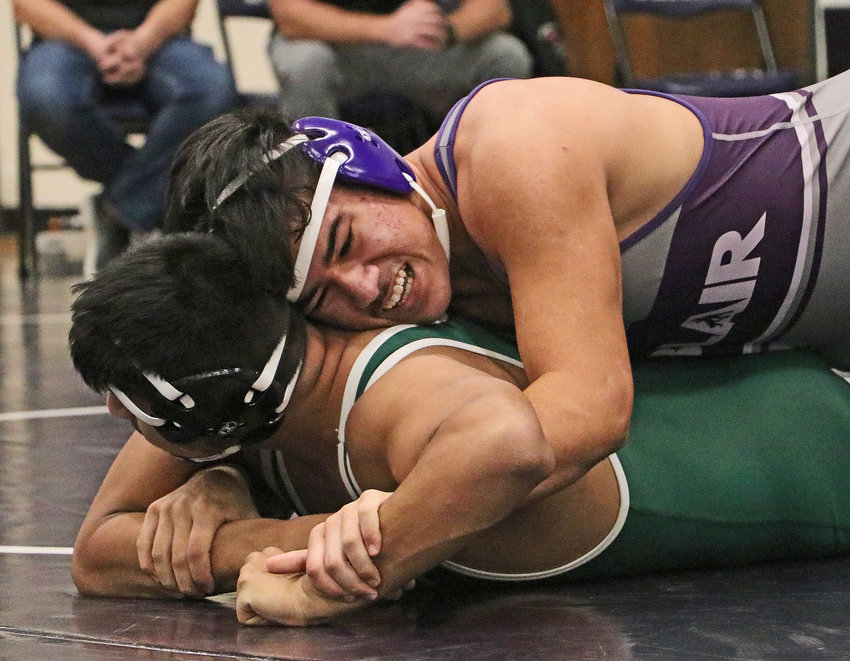 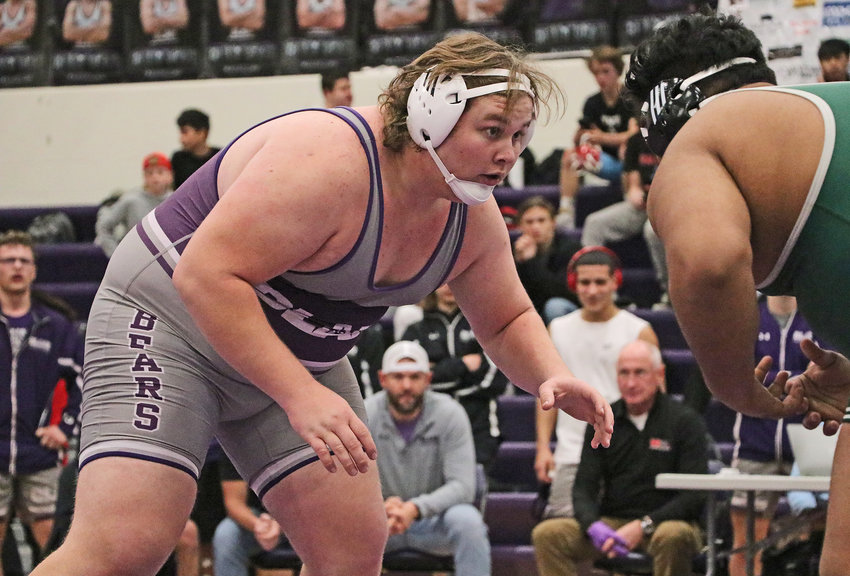 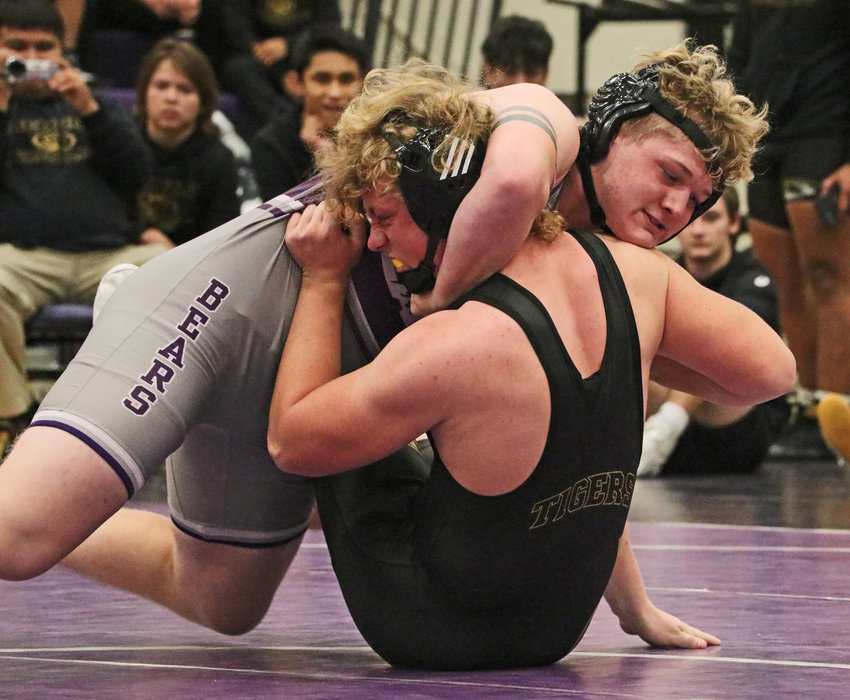 It's been an exciting start to wrestling season for the Blair Bears.
That's at least how coach Erich Warner and his team are feeling. It started when 56 kids went out for the sport and continued through the first two nights of competition at BHS.
“I would say, from top to bottom, I feel like we're as good as any team in the state,” Warner said Friday before the Bears' home dual tournament. “And the way they competed last night kind of showed that.”
Blair's 7-0 dual mark to start the season began Thursday with a triangular sweep of both Fremont and Papillion-La Vista South. The NSWCA Class B No. 2 Bears beat the Tigers first, 69-12, before dispatching the Titans decisively, 60-6.
“It was awesome to see everybody being offensive,” Warner said. “It was what you want to see.”
Though it lost the first two matches at 220 and 285 pounds, BHS handled Fremont from there, scoring team points across the next 12 weight classes. Tyson Brown, Landon Templar, Yoan Camejo, Charlie Powers, Kaden Sears, Laik Young and Livai Opetaia won by pin, while Atticus Dick notched a technical fall and Luke Frost won a 113-pound match by 8-0 major decision.
Young's pin of Fremont 182-pounder Dylan Carlson took just 28 seconds before Opetaia pinned Tigers 195-pounder Angel Mejia in 14.
Next, the Bears dispatched the Titans 60-6, losing only the 120 and 132-pound matches. Hudson Loges, Camejo, Powers, Opetaia and Seagan Packett-Trisdale won by pin for Blair, while Brock Templar won a 16-0 tech fall in 4:53.
“I think our kids got on a roll, and we fed off each other and we got going,” Warner said. “That was exciting to see.”
Cole Welte, Brown, Landon Templar and Kaden Sears wrestled and won matches against Papio South competition, too.
The two-dual sweep slingshotted coach Warner's squad into the next day, Friday, when the Bears hosted Albion Boone Central, Lincoln North Star, Platteview, Ralston and Schuyler for their home tourney.
They beat all five handily.
The Blair Invitational started with the host losing only one match and besting Ralston 76-6. Warner's team started with six-straight pins before Landon Templar notched a 19-4 technical fall at 145 pounds.
Opetaia later trailed his 195-pound Ralston match 6-3 before earning a second-period pin and pushing his squad's lead to 64-6. Next, Corban Landauer broke a 0-0 second period tie with a pin at 220 pounds before Packett-Trisdale locked up with the Rams' Brian Balbuena, tripped him and pinned him in 29 seconds.
Blair then moved onto a 58-12 win against Schuyler in Friday night's second of five rounds. After the quick Ralston dual, Blair's Jesse Loges and Atticus Dick won tight decisions against the Warriors in a longer second matchup.
Frost, Brock Templar, Landon Templar, Camejo, Powers, Sears, Landauer and Hudson Loges won lopsided matches, too, but again it was Packett-Trisdale who finished things off. The 285-pounder nearly got caught by Schuyler's Bryan Romero, but shifted weight quickly from one side to the other to get out from underneath.
“I got to get out of here,” the Bear recalled thinking in the tight spot. “Strong kid. I can't stay on the bottom there and fight. It would tire me out.”
Packett-Trisdale had plenty of energy left as it turned out. Once free, he trapped Romero's arm and finished the match by pin in 2:08.
“Headlock is just my favorite move ever,” the BHS grappler said, explaining the finish. “It's my best move, too.”
From there, the Bears bested North Star 69-12, Boone Central 46-21 and Platteview 57-21 to earn first-place team honors during their home event. Hudson Loges (3-0), Frost (5-0), Jesse Loges (3-0), Brock Templar (4-0), Landon Templar (4-0), Powers (5-0) and Sears (5-0) went unbeaten for the night.
Also earning contested match wins for Warner's squad were Packett-Trisdale (two wins), Landauer (two), Opetaia (four), Camejo (two), Dick (four) and Brown (three).
“It's been fun. We beat everybody,” Packett-Trisdale said two rounds in Friday evening. “Should be ranked No. 1, but we'll get to that part later.”
Blair next competes Friday at the Mid-America Center in Council Bluffs, Iowa. Classic tournament action starts at 1 p.m.