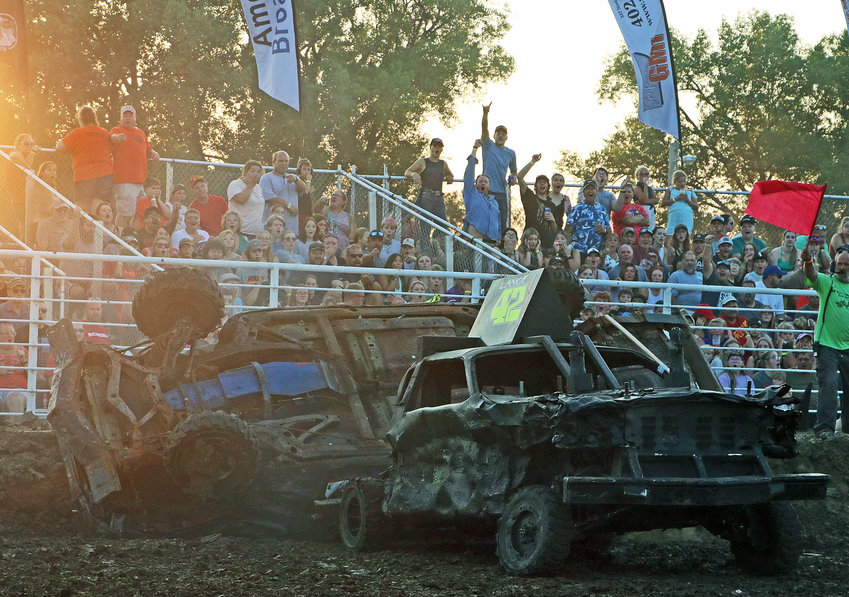 The No. 42L car driven by Tim Lange, right, dumbs over Dillon Kunkel and the No. 7 car Aug. 3 at the Washington County Fairgrounds. Kunkel climbed out of the car unscathed.
Grant Egger 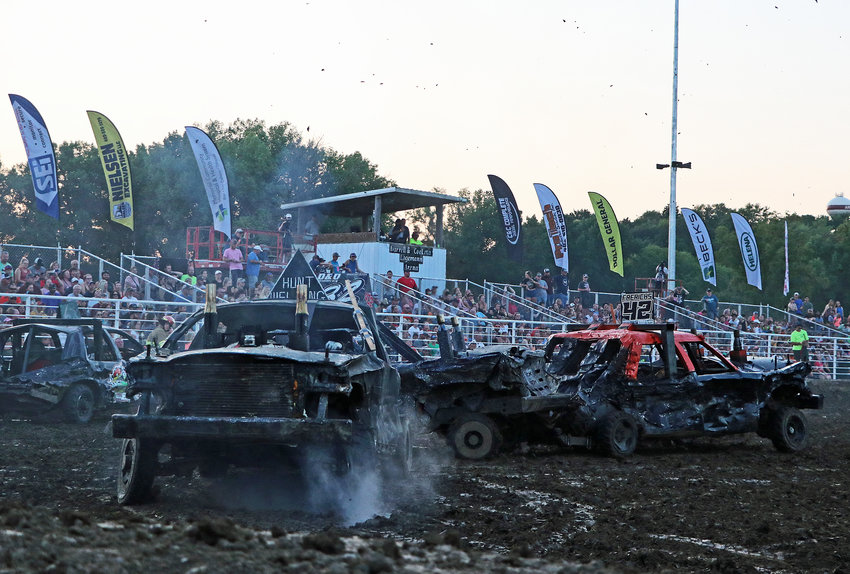 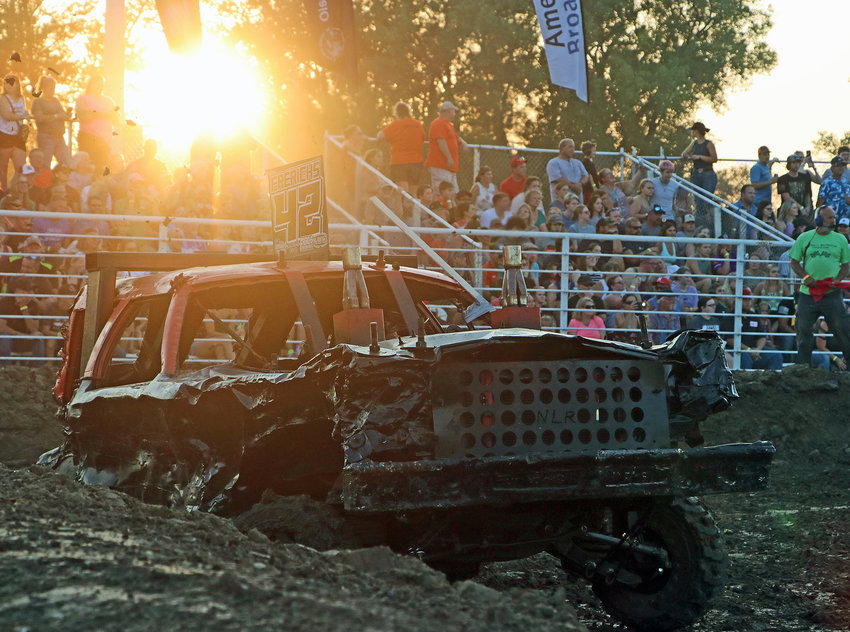 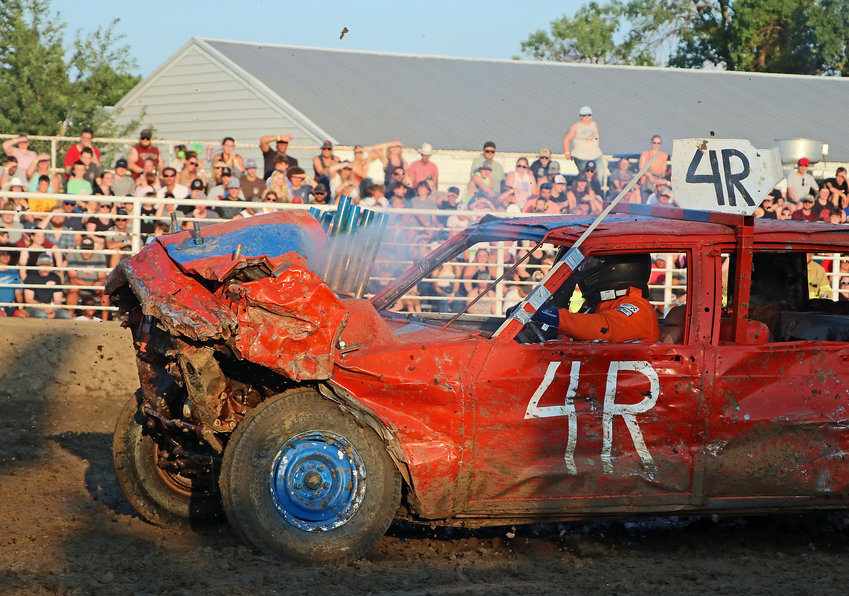 Ray Graef Jr. of Arlington competes behind the wheel of the No. 4R car Aug. 3 at the Washington County Fairgrounds.
Grant Egger 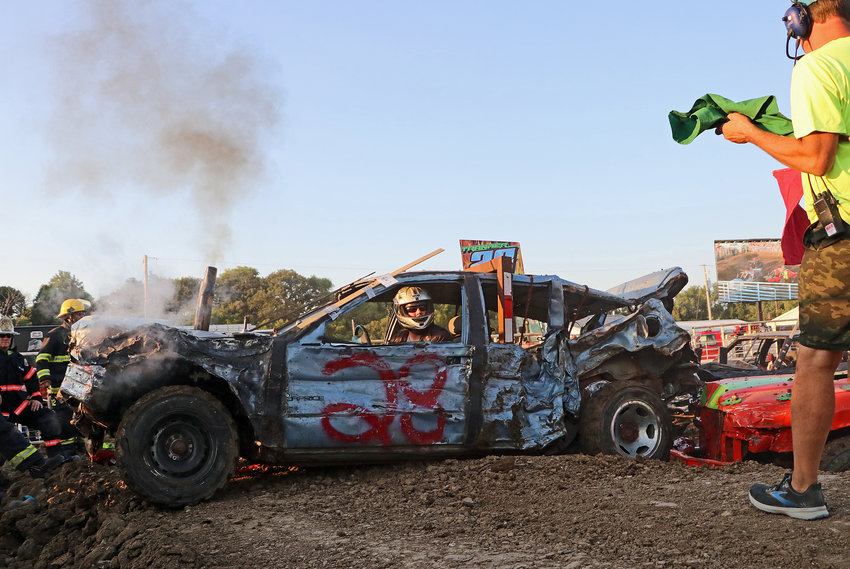 Dan Tranmer in the No. 28 car looks to the official after he's pushed onto the berm Aug. 3 at the Washington County Fairgrounds.
Grant Egger 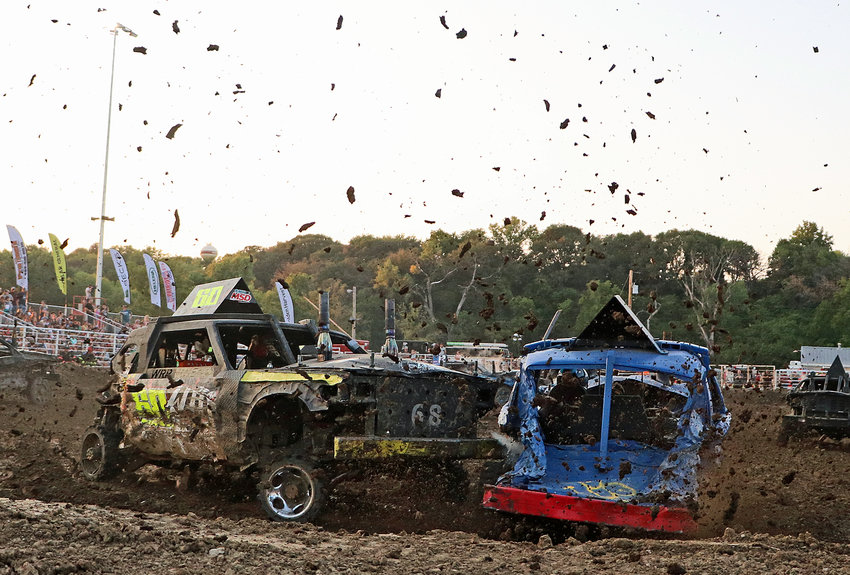 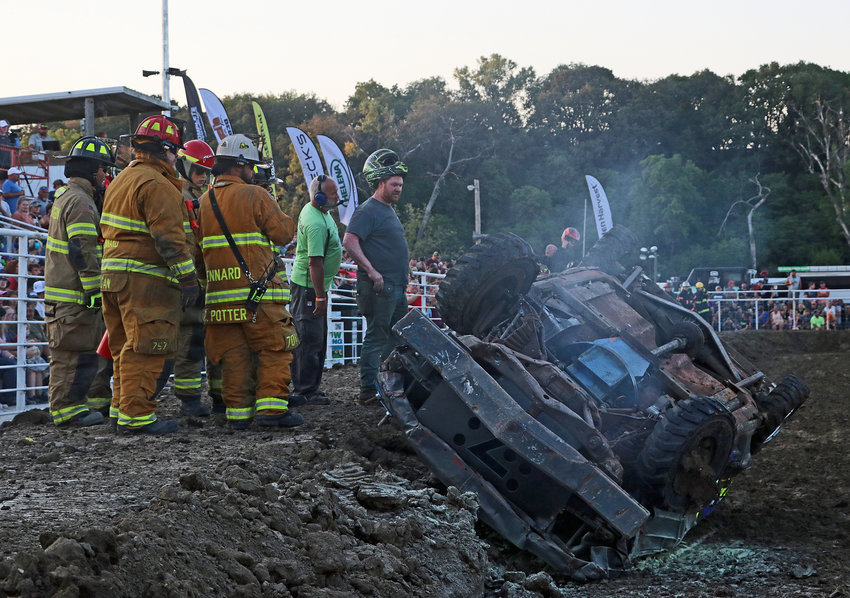 Three drivers earned wins, one car was overturned and another driver was transported to a Fremont hospital Aug. 3 during the Washington County Fair Demolition Derby.
The man behind the wheel of the No. 4KE compact car was extracted from his vehicle after a within-the-rules collision inside the fairgrounds arena in Arlington. He was placed onto a stretcher by emergency personnel and taken to the hospital via Arlington Volunteer Fire and Rescue ambulance.
First Assistant Fire Chief Joe Leonard of the Blair Volunteer Fire Department said the driver was dealing with an injury to his knee, and possible head and neck injuries. Emergency personnel from Blair, Arlington, Fort Calhoun, Kennard, Herman and Nickerson were all in attendance for the annual fair event.
A second driver briefly needed assistance shortly after the initial call to action, but was able to leave the arena under his own power.
Three more drivers, meanwhile, won the night's three feature bouts. Kirk Sake in the No. 55 car won the 1980s stock opener before Iowan Laine Frerichs won a chaotic second behind the wheel of the last vehicle moving.
“Got lucky, I'd like to say,” he said. “Any single one of these cars have the ability to win that. One bad shot can ruin any car.”
Early on in the bout, the No. 7 car driven by Dillon Kunkel was flipped onto its top by the No. 42L car driven by Tim Lange. Kunkel climbed out the vehicle safely as firefighters moved in to check on him.
“It's 100 mph,” Frerichs said in the aftermath. “You're looking every direction everywhere the whole time. I mean, it's stressful.”
As was the last bout after the No. 4KE driver left the arena on a stretcher. Still, Candice Freese of Galva, Iowa, earned the win to a cheer from the Washington County Fairgrounds crowd in the end.
Among the “heavy-hitter” victors on the night was Arlington driver Ray Graef Jr. as announced over the arena loudspeakers. He competed in the 1980s stock opener ahead of the night's further destruction.